The Wonderful World of Toys: Day 666 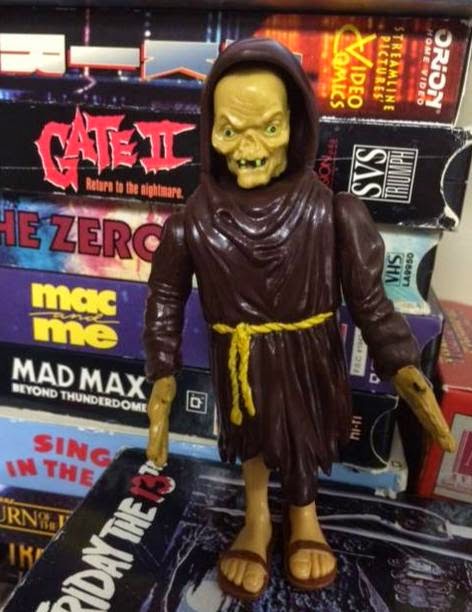 Hello again, boils and ghouls, and welcome to the final Wonderful Week of Toys entry, the nail in the coffin that's come a little too late. Ah, but with every end, there's a new beginning, isn't there?  As we usher out seven days of assorted action figures and plastic dinosaurs, we look to the weeks ahead. They're all gloom-and-doom, hollowed-out pumpkins and hollowed-out skulls. All Hallow's Eve is closer than you think.

Who better to lead us down this pathway of monsters and mayhem than our good friend, The Crypt Keeper?

I've mentioned before that the popularity of The Teenage Mutant Ninja Turtles brought about a strange age of animated series and toy-lines based on peculiar properties. Suddenly, we lived in a world where hyper-violent, R-rated flicks like Robocop (1987) and Predator (1987) could spawn series of action figures meant for children ages seven-plus. Everything was this odd mixture of terrifying and silly, all these brightly-colored nightmares clogging the pegs at your local Bradlees or Kay Bee Toys.

It's a trend that continued on into the early '90s, when you could tune into ABC's Saturday Morning line-up and catch a cartoon based on the macabre HBO-series, Tales From the Crypt. It's a show that both frightened and fascinated me as a pre-teen, so when Nelvana Limited and Warner Bros. teamed up to create a more lighthearted, animated version known as Tales from the Cryptkeeper, which was intended for younger audiences, well, I was there.

I wasn't, however, keen on collecting the toys produced to coincide with the cartoon. On the cusp on being a teenager, I was fine with watching the show on Saturday mornings, but obviously drew a line at owning the action-figures. Odd, I suppose, because nearly two decades later, and I was ecstatic to stumble upon The Crypt Keeper figure at my local thrift shop. There he was, jammed into a bag with a random assortment of Happy Meal toys and a battle-damaged Spider-Man, waiting for me to rescue him from his own nightmare.

I'd be terrified too at the prospect of spending an eternity trapped in a plastic-prison alongside Kung Fu Panda.

Email ThisBlogThis!Share to TwitterShare to FacebookShare to Pinterest
Labels: 90s, halloween, tales from the crypt, toys