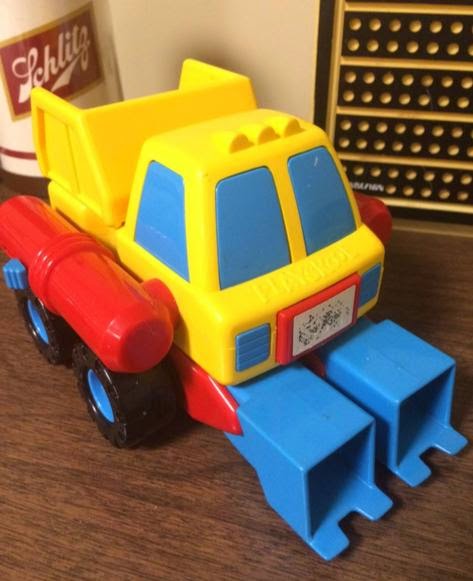 And here's another relic from my childhood that was salvaged from the local thrift shop.

Long before there was Transformers: Rescue Bots, way back in the mid-'80s, Hasbro utilized its recent acquisition, the subsidiary Playskool, to release My First Transformers. A trio of brightly colored vehicles that could, uh, transform into things that sorta' resembled robots in disguise. There was a race-car, a jet, and this guy right here, who was affectionately referred to as Dump Truck.

I never owned Dump Truck before; already at an age where the real Transformers appealed to me more. I did, however, have a younger cousin who did have him. So, despite my love for Soundwave and Grimlock and those pesky Insecticons, there was still something totally appealing about their primary-colored, safe-for-most-ages "little brother". I have pretty fond memories of time spent at my aunt and uncle's, casually transforming Dump Truck back and forth between his two modes. 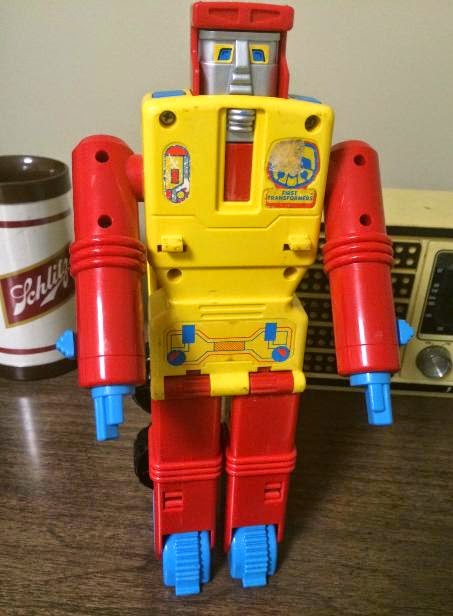 Here he is in robot-mode, and yeah, he's not nearly as impressive as Optimus Prime or Omega Supreme. Hell, even Bumblebee gives poor Dump Truck a run for his energon cubes. Still, I adore his simplicity and the fact that he shares ties with one of my favorite childhood properties.

Unfortunately, the decal on mine is in rough shape, but I still get a huge kick out of his adorable faction symbol. He's not quite an Autobot, but maybe he'll get there when he's a little older.