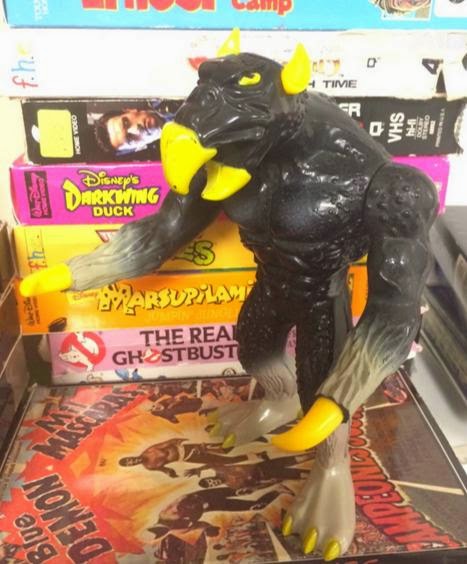 I had no idea what I was looking at last week, a late-day visit to my local flea market, and there was this bizarre looking creature sitting in an open cabinet. He was half-buried under a mix of old wrestling figures, just enough visible to catch my eye. Something about the Hook Horror reminded me of those old Thundercats toys, which isn't too far off, considering he was produced by the same company, LJN. However, he doesn't hail from Thundera like Lion-O or Snarf, but instead from, uh, wherever it is that Dungeons & Dragons takes place.

I have no real fondness for the old D&D; never one for role-playing games in my youth. There are vague memories of watching the "classic" Dungeons & Dragons animated-series when it aired on Saturday mornings back in the '80s. But otherwise, I've never been a fan of sword-and-sorcery RPGS, all elves and chaotic-neutral allegiances.

If I'd known that the game was populated by weird, mish-mash monsters like Hook Horror, well, maybe I would have been tempted to give the game a try.