Recollecting: Into the Inferno


A few months back I wrote briefly about JC's Things, a local second-hand shop that I had previously ignored for years before finally checking it out. What I believed to be a junk furniture store ended up being so much more; a building filled to the brims with all sorts of outdated wares, stacks of records, VHS and decades-old greeting cards. I still haven't shared a glimpse at the treasures I uncovered during that inaugural visit. And here we are again, me mentioning the shop and refusing to show off the goods. That's because a more recent trip actually surpassed the original by a narrow margin. 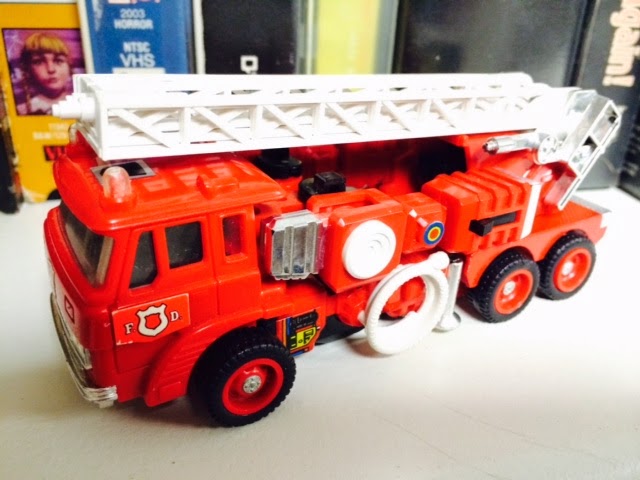 My father only recently, the middle of this last year, retired from firefighting. I was blissfully unaware the inherent dangers of such a profession when I was a kid, content to visit my dad at the station. Something that afforded me plenty of opportunities to try on his gear and climb all over the various trucks. So, of course, I loved collecting toy-versions of engines; Hot Wheels and Tonka and, most importantly, Takara/Hasbro. No surprise then that Inferno was my first major Transformers toy.

That also means he was probably one of the first casualties; lost in the ether like so many of my childhood possessions. Carelessly tossed aside when something better came along. Oh, poor Inferno, forgotten and ignored, until a parent decided I no longer needed him, and either threw him away or donated him. Instead, I like to imagine him alongside the other fallen Transformers [and Gobots] from my youth, protecting Cybertron from the forces of evil. 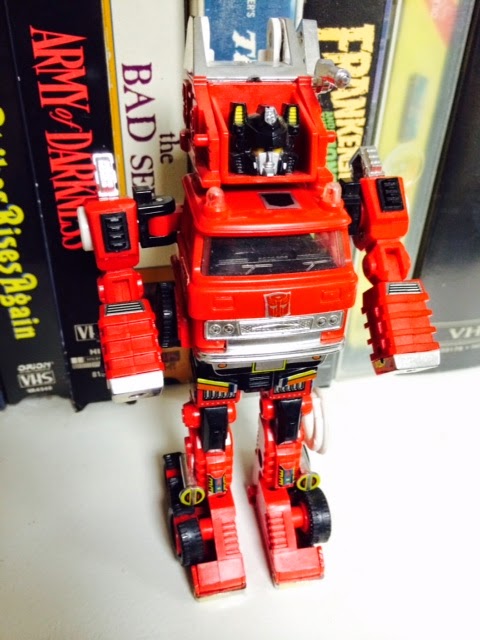 Since he was originally released in 1985, I initially believed this Inferno to be part of Hasbro's Commemorative Series, reissues that were made available in Toys"R"Us during the '00s. The condition was a little too good to be a legit '85-version, wasn't it? I mean, sure, he's missing both his hands and any additional accessories, but the plastic was so crisp and clean that it looked like he just came out of the package. A little digging revealed that this was, however, a G1 Inferno and not a reissue. Something to do with the forearms being retooled on later releases to remove the "missile-firing" action that the original, this very same one, possessed.

So, yes, despite a few missing pieces, I'd say he was a solid score for a measly two bucks.

They've become par for the course around these parts the last several months. It looks like I run a blog of infrequent updates and broken promises. I'm back and gone again, back and gone again, until the inevitable day where the posts just stop altogether. Too easily distracted by social medias that require the bare minimum of effort; Twitter with its 140-character "updates" and an Instagram full of quick pics with little thought put into each caption. Both accounts have already well surpassed this blog in terms of followers, which shouldn't bother me at all, but totally does.

I feel pathetic admitting that, because how can I expect anyone to come here and stick around when there's never any new content.

Oh, but the plans that I had when I started It's Trash Culture. There's always plans that wind up as broken promises to myself, ideas that never materialize or projects that end long before they truly begin. All these self-fulfilling prophecies of doom whenever I think of attempting something creative. The evidence speaks for itself. 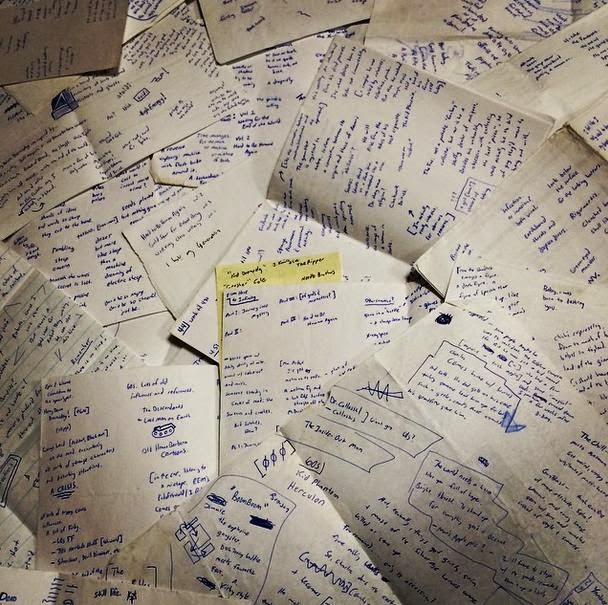 This is what several years worth of notes looks like. Lunch-breaks and late nights spent jotting down concepts, scenes and snippets of dialogue. Yeah, I've always wanted to write comic books. I grew up wanting to create worlds full of ridiculous characters and trippy adventures and all the brightly-colored bullshit that I read and loved in the pages of my favorite comics. It's one of the few things that I have wanted to do since I was a kid, but besides the scribbles you see up above, well, I haven't made any attempts to achieve this life-goal. Some of these concepts are over a decade old, so it seems unlikely they'll ever move beyond those index cards and random sheets of paper.

I realized earlier that this blog was starting to suffer a similar fate. Wasting time trying to brainstorm ideas for posts, writing them down on the back of receipts and scraps of napkins, but never taking the time to post them. Sometimes I'd go so far as to take pictures, upload them with the intention of sharing them here, but I'd get distracted, too easily distracted, by reruns of The Golden Girls or napping on the couch.

I could go for a nap right now, actually.

All this may mean nothing going forward, but my hope is that I finally get my fucking act together and start posting here more. No promises, no guarantees, but I hope.