Be Kind, Please Rewind: The Price Is Right


Sometimes the universe loves me.

I spent my morning off yesterday visiting one of my favorite thrift shops, a not-so-local Savers that I don't frequent as often as I'd like because of the distance. It's not clear across the state or anything, but it can occasionally take nearly an hour or so depending on traffic. The time spent getting there is usually worth it, though. Some of my absolute best finds have happened at that particular shop, and yesterday was no exception. Yesterday may have been my best score yet, and it didn't even happen there. Not really, at least.

While I was digging through tapes in the store's limited VHS section, an older gentleman suddenly spoke to me. Asking if I collected and watched videos still. I, of course, responded affirmatively. Although, I've actually cut back on purchasing tapes the last couple of months. Mostly it's because I haven't had much luck finding anything worth picking up. Constantly hitting the same few thrift shops and flea markets, where the selection rarely changes. Shelves lined with multiple copies of Speed (1994) or The Lost World (1997) that never go away, taking retail space away from the odder titles I might be hunting for.

He mentioned that the local library had boxes and boxes of VHS tapes that they were looking to get rid of.

And they were absolutely free.

This is the kind of scenario that I've been hoping to stumble onto since I started actively collecting tapes. It seems that all the video stores in the area closed before I considered rebuilding my collection, or they were too far away for me to justify raiding their inventory cleansing close-outs. Here was a public library, only a few minutes away, that was looking to purge their supposedly vast collection of tapes by giving them away. Thanking this mysterious messenger, I hurried off to check things out. The whole drive there was spent trying not to psyche myself up too much; worried that I'd be dreaming of the ultimate score, only for the whole thing to turn sour. 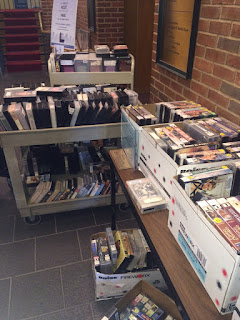 This is the first thing I saw when I walked into the library's main lobby. Carts loaded with tapes, a table littered with boxes full of more. There were signs hanging up all over that exclaimed that the VHS were free, but it was a limited time offer. In another two weeks, they'd all be gone, so take advantage now! Even with the evidence right in front of me, I was still nervous and hesitant. There was probably a limit on how many you could take, or maybe you had to have a card for the library. Whatever it was, well, there had to be a catch, didn't there?

And, so, the hunt could now truly begin... 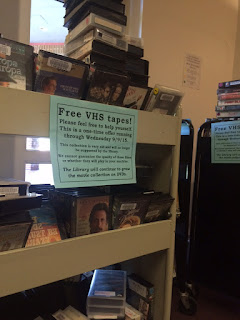 Another small room off to the side contained three more carts jammed full of former inventory. Titles that ranged decades, their labels marked Discarded in bold red letters. I was ecstatic. Rifling through the tapes, plucking some free and checking the condition. Oh, sure, the original boxes were mutilated; cut so they could fit in plastic cases that better fit the library's needs. I consider myself a collector, but I'm more interested in owning and watching the actual films, and less so with the condition of the case or sleeve. In a few short minutes, I'd already amassed a small pile. One of the library's employees, super-pleasant despite the fact I was there only to raid for free stuff, offered me a bag to set them in.

A few minutes later, she came back and asked if I wanted a box instead, because there was now another pile of titles sitting next to the overflowing paper bag she'd just given me.

After about an hour of searching, going through each cart and carton twice to make sure I didn't miss something in my overly-excited state, I decided to call it quits. I'd loaded the box with thirty-seven tapes, though I could have easily taken twice that. I was already feeling greedy, though, and couldn't justify taking duplicates of stuff I already owned simply because they were free. Besides, I've been stockpiling titles for years now in various formats, and I'm already wondering how I'll get around to watching them all. Maybe eventually I'll make time for them.

Otherwise, I've just been acquiring all these tapes that will one day serve as my tomb. 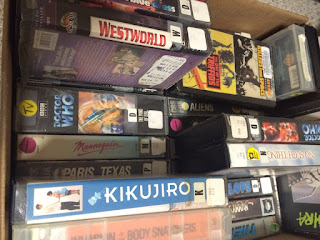 Here's my entire haul tucked away in the box I lugged to my car after leaving. It's a pretty solid selection of films, ranging from classic sci-fi flicks to neo-noir to art-house darlings. I'd originally intended to give a good look at everything I grabbed, but have decided instead to highlight the picks that had me most excited. Some of them actually had me on the verge of shouting for joy, which would have been both embarrassing and totally inappropriate considering my surroundings. 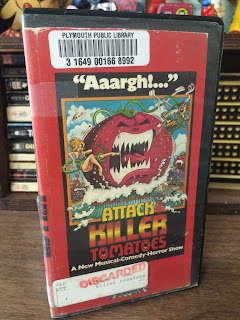 I've written and spoken about Attack of the Killer Tomatoes (1978) several times in the past, but this is the first time that I've owned the original film in any format. And while I'm a bigger fan of its immediate sequel, the movie that started it all was a must-have for me. I still have a difficult time wrapping my head around the fact that we live in a world where this low-budget, "musical-comedy-horror show" spawned three sequels, an animated series, and a fair amount of merchandise in the early '90s.

It makes me glad to be alive. 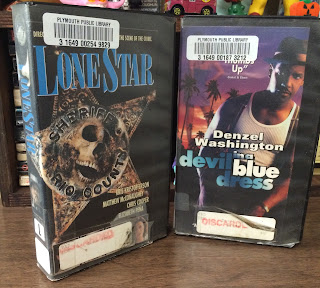 Back in college, I was lucky enough to have some friends who were just as obsessed with discovering new films as I was. This meant renting stuff we might otherwise have ignored without the others' input, and here's a pair of titles that we discovered thanks to our shared love for cinema. I haven't seen either in over a decade, but I'm glad that I can revisit, and hopefully enjoy, them again.

Trash Man Trivia:  Lone Star (1996) was one of my Staff Picks at 20/20 Video, the store I worked at while I was living in West Hollywood. I don't think anyone ever rented it. 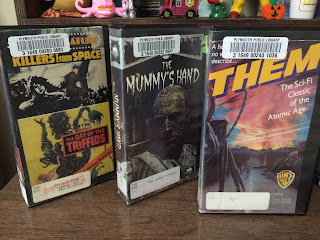 A small selection of "classic" horror and sci-fi films, including one of my all-time favorites, Them! (1954). I have very specific plans for these tapes; I'm not gonna rush into watching them like some of the others I picked out, instead saving them for part of my Halloween season. I always like having a steady mix of older and newer horror flicks for the holiday, and The Mummy's Hand (1940) is a perfect inclusion with its Universal Studios roots.

Also, I'm really pumped for The Day of the Triffids (1962). I've attempted to read the source novel on a couple of occasions, but always found it a little dry and unappealing. The film, however, I've only ever heard really good things about. We shall see, I suppose, as the days get shorter and the leaves begin to fall. 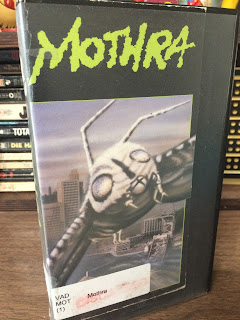 This is one of those finds that nearly had me whooping and hollering to the heavens. I'm a life-long fan of Toho's giant monsters, practically raised by Ghidorah and Rodan from the get-go. And while I already own several of Godzilla's team-ups with her, I've never owned Mothra (1961) before today. I'm an absolute sucker for this film, and the theme alone [performed by The Peanuts, Emi and Yumi Itō] is enough to give me chills.

It's also another film that I'll be saving for a night closer to Halloween.

There are a lot more goodies that I grabbed, but I'll wait on showing those off until a later date. 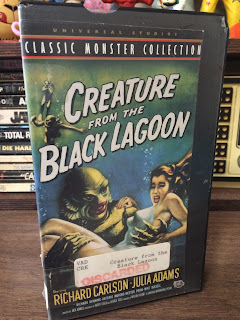 Except this one, because who doesn't love The Creature..?
Posted by the Trash Man at 2:34 PM 10 comments: 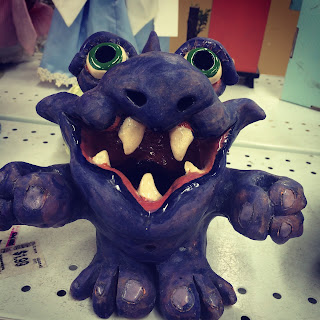 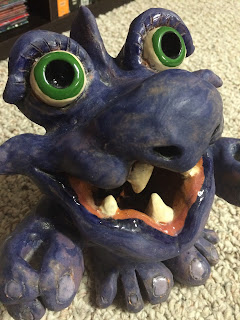 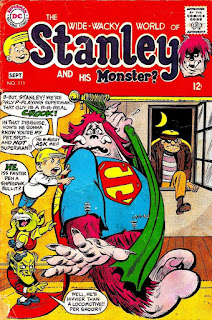