The Wonderful Week of Toys: Day One


Is there anybody out there..?

I sure hope so. Not that I'd blame anyone for jumping ship, though, what with the infrequency of posts and the increasingly long periods in-between. Few and far between, man. Close only counts in horse-shoes and hand grenades. Or something like that.

In an attempt to jump-start this dead or dying blog, I'm gonna try my hand at a theme-week; seven straight days of posts that may possibly be mildly amusing and/or the slightest bit interesting. We dream big here at The Trash Pile, kids. Don't you dare ever say otherwise.

You see, and some of you might remember this, we're heading into my absolute favorite time of year. There's already been glimpses of spooky cereals and fun-size Milky Ways, but we're still a little time away from hanging the fake cobwebs and carving pumpkins. The plan is to build up a reserve of scary, thrilling things to post about in October, while still taking time to pay tribute to the non-Halloween trash that happens to come along, too. That's gonna mean more posts, more of my inane ramblings, more more more.

The only problem, the one thing that threatens to derail those plans, is that I obviously lack the ability to stay consistent. To post frequently, to, well, to keep the train rolling, since apparently we're stuck on a locomotive metaphor. I am the worst kind of conductor, it seems, and you're unfortunately along for the ride. As long as you choo-choo-choose to stick around, that is.

So, yes, let's ignore that last bit of bullshit and get going with the first entry in The Wonderful Week of Toys. 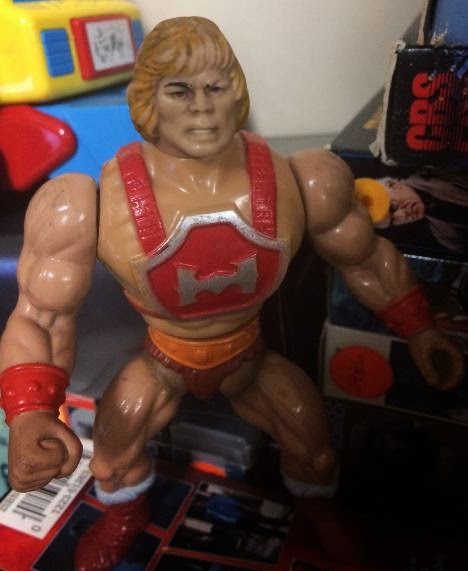 Originally released in 1985, smack in the middle of The Masters of the Universe toy-line, is Thunder Punch He-Man. One of the many variations of He-Man created for the line's seven-year run, this particular version featured a backpack that could be loaded with caps, allowing a "thunderous" blast with each punch thrown. Not pictured are his two weapons, his trusty Power Sword and a new-design shield, which were molded in a mustard-gold plastic.

I never owned the Thunder Punch-version as a kid, but I was totally content with the bare-bones original release. This guy pictured above was found in a grab-bag at my local thrift shop a couple weeks back, packed along with another of this week's upcoming highlights. He-Man's pretty battle-worn; you can clearly see where the paint has faded away on his face and hair. He's also lacking his thunder-punching abilities, the backpack gone to Sorceress knows where.

Still, there's something about him that I really enjoy. He's only one of three Masters of the Universe figures I own these days, something I'm hoping to change in my collecting future. It's safe to say, though, that he'll probably end up my default He-Man from here on out.
Posted by the Trash Man at 12:56 PM

Email ThisBlogThis!Share to TwitterShare to FacebookShare to Pinterest
Labels: he-man, masters of the universe, toys