We're cutting things close today, due mostly to a lengthy flea-market trip and spending time with friends. The former is going to throw an interesting monkey-bird, er, I mean, monkey-wrench into the planned entries for the remainder of the week and that's okay. More than okay, actually. Just you wait and see. 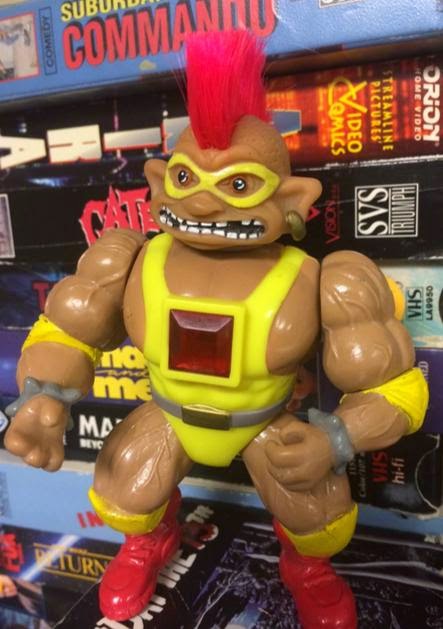 For today, though, we're heading back to the year 1993. A time where Bill Clinton took over as President of the United States, WWF Monday Night Raw debuted on cable-television, and for some odd reason, troll dolls were a thing again. In an attempt to appeal to pre-teen boys, several toy companies released their own series of action figures loosely based around the concept of Norfin Trolls. One such toy-line [and an accompanying animated series] was known as The Stone Protectors.

Which is precisely where this guy, Chester the Wrestler, originated from. Not only a professional wrestler, Chester also played bass guitar and saxophone in The Rock Detectors, which is possibly the worst band in existence. Actually, maybe second worst, placing just behind Butthole Surfers.

Chester and his glorious, neon-pink mohawk only ended up in my collection because he was sharing space with Thunder Punch He-Man. Yes, this is the guy who also happened to be in that dollar ninety-nine grab-bag I mentioned in our first Toy Week update. Sad to admit, but if I'd stumbled across Chester on his own, I probably would have passed. Now that I have him, I'm even sadder to admit, I actually find that I dig how ridiculous [and awesome!] he is.

I may even keep an eye out for his trollish band-mates.