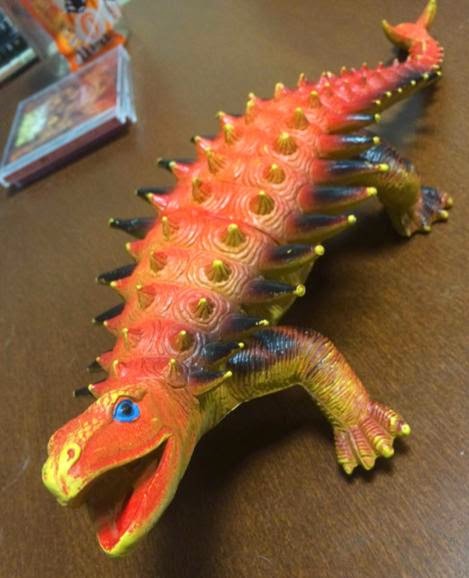 He probably doesn't look like much, I know, but he may go down as one of my all-time favorite finds. Released by a Chinese company called Dor Mei sometime in the '80s, this ankylosaurus is an absolute dead-ringer for one that I owned as a child. Like a lot of young boys, I grew up totally obsessed with dinosaurs and giant monsters; a massive fan of King Kong (1933) and the Godzilla series of films. Hell, I even used to rent the British-produced Godzilla knock-off, Gorgo (1961), pretty frequently on VHS.

Despite the overwhelmingly awesome selection of toy-lines available during the decade, one thing that was sorely lacking in the 1980s was a series of legitimate "kaiju" toys. Sure, there were bootlegs galore; dozens of different scaled Godzilla replicas. Some looked pretty authentic, but most were light-years away from the real thing. That didn't bother me at all. I loved my Godzilla knock-off, even despite his outrageous shade of blue.

Likewise, this chipper-looking fella worked perfectly as a stand-in for The Big G's best pal, Anguirus.

When I saw him last week, sitting on a shelf surrounded by beat-up Imaginext Batcaves and broken remote control trucks, I knew that he was coming home with me. I only wish I still had that baby-blue, bootleg Godzilla and a tub full of Legos, so I could recreate those childhood days of devastation.