Waiting for October or: How I Learned to Stop Worrying and Be a Halloweenie


There's only two days until Halloween.

This is both terribly exciting and absolutely gut-wrenching, like mixing candy bars and razor blades, pumpkin spice with anything. Two months spent in anticipation of a single day. Counting down entire weeks while absorbing every spooky movie possible and plenty of sugary sweets. Everything is spider webs, candy corn and trees ablaze with orange and red.

At least that's the idea.

I can't believe there's only a couple more days left, because it feels like I've barely begun to celebrate the season. Sure, yes, I've been watching essential seasonal cinema like Ghoulies II (1988) and Addams Family Values (1993), but it doesn't feel enough. There were big plans to post more content here, covering everything from vampire rabbits to shark-based board games. Maybe there would be an appearance by Dr. Phibes, too.

None of that happened, though. Becoming an adult, something I've avoided for years and years now, has absolutely been kicking my ass lately. Long work days that turned into naps when I got home. Too drained to attempt writing anything that celebrated my supposedly favorite holiday. Worrying about getting the bills paid when I should have been splurging on boxes of Count Chocula. No way for me to stay up late watching AMC's FearFest when I have to be up early the next morning to start the whole cycle over again.

Even the weather betrayed me; the first half of the month was unseasonably warm, nowhere near the hoodie-appropriate temperatures I craved. The leaves refusing to turn, to fall, until about a week ago. There were only a handful of days that were perfect, gloomy and cool, and they were spent inside at work. A retail hell that was already casting aside pumpkins and skeletons for Christmas decor and candy canes. It had become unbearable, nearly annihilating my love for this time of year, and especially this holiday.

With only these final few days remaining, I've decided to do my best to salvage them. I'm not going to force things, though, instead indulging in the sort of stuff that should jump-start my blackened heart. Bringing me back from the verge of death like Frankenstein's Monster or Bud the C.H.U.D.

And we're gonna start with The Adventures of Pete & Pete. 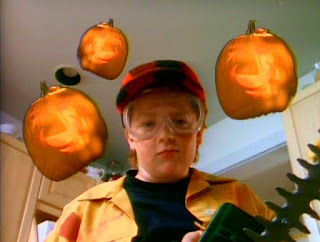 Originally airing as a series of shorts on Nickelodeon starting in 1989, Pete & Pete would eventually evolve into a half-hour program that ran for three season (1993 to 1996). It followed the daily exploits of two brothers, Big Pete (Mike Maronna) and Little Pete (Danny Tamberelli), in the town of Wellsville, a seemingly normal suburb that was home to a variety of bizarre characters. The show was a unique blend of day-to-day living with absurd situations, and it appealed to its audience with its lo-fi sensibilities and the inclusion of several notable "indie" bands from the era, including The Magnetic Fields, Apples in Stereo and Drop Nineteens.

For me, living in the suburbs just south of Boston, Pete & Pete perfectly encapsulated what it was like to grow up in a small-town. Those gorgeous summer days spent outdoors, long bike-rides with your friends, Little League baseball games that ended with a trip to the local ice-cream stand for a treat. And, of course, Halloween. When you'd gather together with your siblings and friends, to trek from one neighborhood to the next, trying to score as many fun-size Three Musketeers as humanly possible. 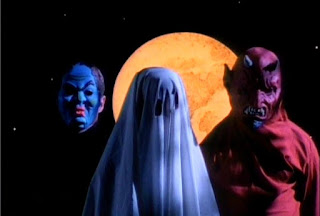 In the season two episode, "Halloweenie", the Petes find themselves at odds when it comes to a spooktacular night of trick-or-treating. Big Pete believes he's too old to don a mask and go door-to-door with his kid brother in search of candy. He's terrified of being caught by his peers, where he'll be deemed a "Halloweenie" by classmates and left to a fate worse than death. Jaded with the holiday, he's even tempted to destroy a jack-o'-lantern. Driven to madness by this overwhelming urge, Big Pete smashes the pumpkin and breaks one of Halloween's cardinal rules. It appears he may be destined, doomed perhaps, to join The Pumpkin Eaters, a gang of mischievous youths hellbent on ending Halloween once and for all. 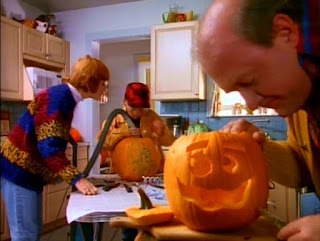 Meanwhile, Little Pete is obsessed with breaking The Record -- visiting the most houses in one night of trick-or-treating -- an act that will make him a legend. The task might prove impossible, however, when his best-friend, Nona (Michelle Trachtenberg), is forbidden to go out by her father [who's, uh, portrayed by Iggy Pop in one of his several appearances on the show]. Little Pete's only chance to attain immortality is to appeal to his older brother, convincing him to throw on a costume one last time in the name of All Hallow's Eve.

With the entire fate of Halloween now resting on their shoulders, the two brothers are forced to confront the horrors of "Endless" Mike Hellstrom (Rick Gomez) and The Pumpkin Eaters. And Big Pete, much like myself, must learn to embrace the youthful exuberance he'd nearly forgotten and love a holiday dedicated to ghosts, ghouls and mini Snickers bars. 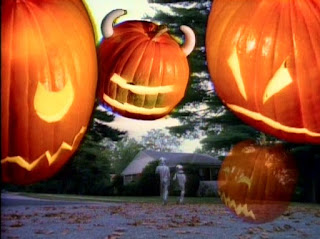 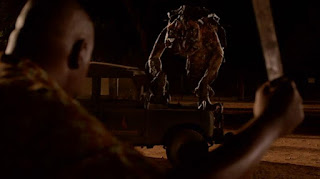 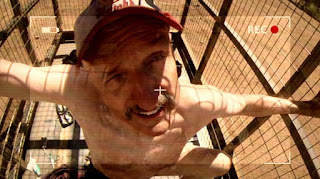 Hell, I would have settled for a cameo from Melvin.
Posted by the Trash Man at 4:54 PM 2 comments: