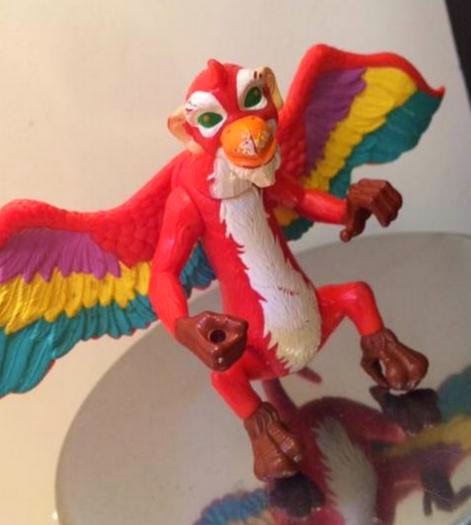 Remember that monkey-wrench I mentioned a couple days back?

Some of you may know him best as Niddler the monkey-bird from Hanna-Barbera's fantasy-based animated series, The Pirates of Dark Water. Originally airing as a five-part mini-series, and referred to only as Dark Water, the program gained an immediate cult-following. A year later, sixteen additional episodes were produced, and they would air as part of ABC's Saturday morning line-up. Hasbro Toys picked up the license that same year and created several action-figures based on the series.

I have fond memories of the cartoon, but never owned any of the toys when the show was first broadcast back in 1991. When I spotted Niddler, along with a handful of other figures from the line, sitting in a random plastic bin at the flea market this past Sunday, well, I wasn't going to leave him behind.

And yeah, he's a little rough; the paint worn from his beak, and various scuff-marks littering his feathered frame. I still love him though, despite the flaws and imperfections. Maybe even because of them. It's almost like I enjoy the idea that his previous owner actually played with him quite a bit, loved him more than the Batman or Power Ranger figures they had, too. I imagine story-lines where a sidekick like Niddler was able to be the hero, to save the day when no one else could.