The Bogdanovich Challenge: Week One 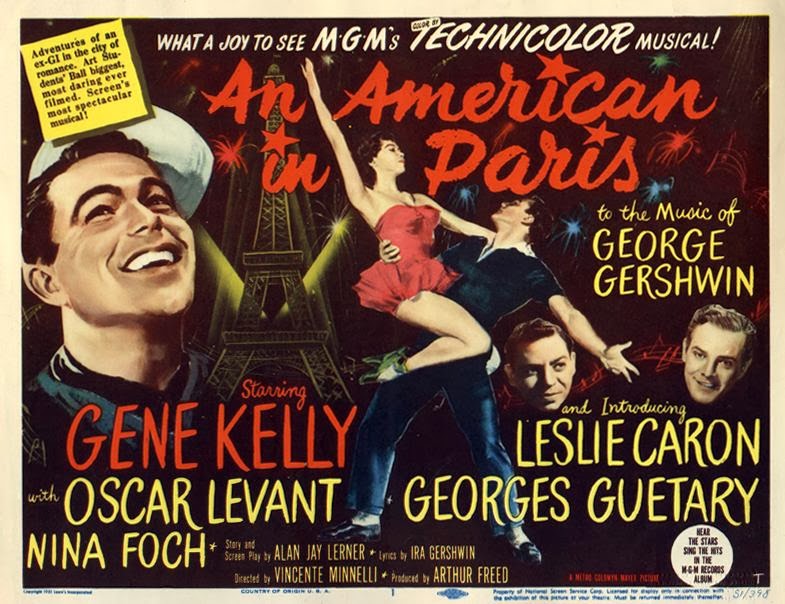 
"See the all-positive America aura that America and the world embraced in 1951, and see from what a high we have fallen. But pictures bring back that spirit, which is a big deal, and should be on a big screen, where its mythic size can properly counteract the pygmy dynamites of today. Failing that, sit close to the largest big-screen TV and enjoy two hours of American happy times, just a breath away from the encroaching darkness of Korea, the sexual revolution, drugs, the victory of TV, at least three earth-shattering assassinations, and Vietnam."

Bogdanovich wrote, "There's nothing like a solid musical to start the year with a smile."

Normally, I'd disagree with him, but mostly because one of the few genres I've failed to embrace over the years is musicals. There's only been a handful I've tolerated, and fewer that I've genuinely enjoyed. I wasn't sure how well his first choice, An American in Paris, was going to go over. There was always the potential that it could poison this little project of mine before it ever had a chance to really take off.

Surprisingly, this was not the case.

There's a lot to enjoy in An American in Paris, from the lavish productions to the energetic performance of leading man, Gene Kelly. Celebration is key to the film, whether celebrating life or love or freedom, but there's an underlying melancholy to the story that appealed to me more. Some may lose themselves to the upbeat; the joy on the faces of the children during Kelly's song and dance number "I Got Rhythm", the moments shared between Jerry Mulligan (Kelly) and Lise Bouvier (portrayed by the lovely Leslie Caron). I found myself gravitating more towards Nina Foch's character, Milo Roberts, a lonely heiress pretending to be more interested in Jerry's artistic abilities rather than the man himself. And poor Adam Cook (Oscar Levant), sulking while two other men sing about love; neither one aware, though Cook is, that they're singing about the same woman.

The film is capped by a nearly twenty minute dance number, featuring numerous sets and costume changes for the main cast members. Kelly and Caron both pour their hearts into these performances, and are able to express love and loss, sorrow and longing and jubilation, through movements alone.

I wasn't expecting much from An American in Paris, but found myself pleasantly surprised and perhaps a little moved by the film. It really was a fantastic way to start this challenge. If each of Bogdanovich's selections are as beautifully executed and enjoyable as this one, I've got a year's worth of wonderful movies ahead of me.
Posted by the Trash Man at 1:02 PM