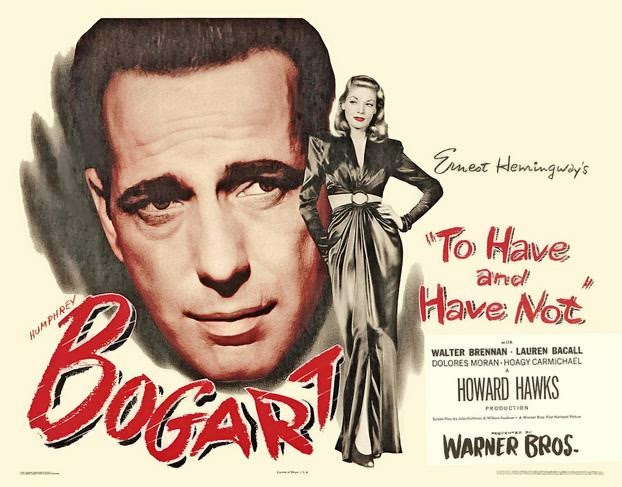 
"The resultant 1944 movie, starring Humphrey Bogart and Lauren Bacall, is probably the best love-story-and-foreign-intrigue picture ever made. In the same genre, I much prefer To Have and Have Not to the more famous Casablanca, and I watch it more often, not least because it has a happy ending."

It took a little while into its run-time, but To Have and Have Not won me over by the film's end. A little too reminiscent of Casablanca to start, a film I attempted to watch back in high school and couldn't quite get through. Bogart always a little too too-cool-for-school, smoking in every scene and only calling Lauren Bacall things like "Slim" and "Junior" to the point where you wonder if she has a real name at all. He's a jack-of-all-trades, equally good at fishing and tending to bullet wounds, and always with something dry and sharp in response to everything said to him.

But then he loses his cool during the third-act and pulls a gun, and I'm completely won over. This is the Bogart I wanna see more of; hand shaking after gunning down a Vichy goon, making angry and violent threats. Gone is the carefree and cool, replaced by a bastard who will do anything to protect the people who matter most to him.

Lauren Bacall, too, is a wonder to watch. She was only nineteen when the film was made, but her character Marie appears years older and more together than others twice her age. It's easy to see how Harry Morgan (Bogart) and the actor himself both fell for her. And the two would appear together in another of director Howard Hawks' films, the noir thriller, The Big Sleep, which was released two-years after this one.
Posted by the Trash Man at 2:26 PM