Riding in Cars with Death


I had a great idea for a post a short while back-- let's take a look at the contents of my car's glove compartment!

That sounds terrible, I know, but trust me when I say that there are no gloves inside. There are no travel-packs of Kleenex or half a tube of Lifesavers or anything boring like that. Nope, no sir. You best believe that I only keep the coolest of items on-hand and available when I go out driving. The necessities of life for a self-proclaimed, pop-cultural anthropologist or The Clown Prince of Pop Culture.

Those are both stupid things that I referred to myself as during high school, which is one of the many, many reasons I didn't have any friends in high school. Why I've never had any friends ever.

Another reason is pictured directly below.

Yes, those are the contents of my glove compartment. It probably reminds you of the type of stuff a young kid would be keeping in a shoe-box or maybe tucked away in one of the drawers of their desk. Actually, are desks like a normal thing that kids have in their bedrooms growing up? I had one when I was younger, and I kept all sorts of different things in each drawer; one held trading cards, another was filled with small, plastic mini-figures of all varieties. I even recall sticking some Super Mario and TMNT stickers on yet another and using it to store all my NES games.

Anyway, let's make like Degeneration X and break it down.

It being my glove compartment, because that's what this post is about? 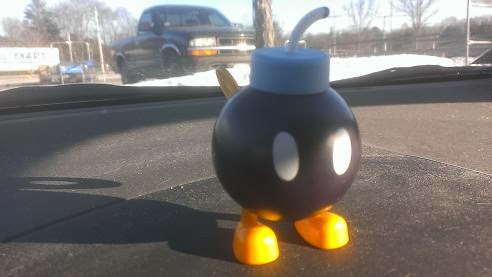 Bob-omb is quite possibly my favorite video game "character" of all-time. That sounds like a bold statement, and it is, but I am an absolute sucker for anything related to Super Mario Bros. 2, and he's one of the few elements from that game that has carried forward into nearly all the subsequent Super Mario titles. Otherwise, I'd go with Mouser as my favorite, because he's a villainous rodent who wears sunglasses. He deserves more respect, mostly because he can hurl bombs at you, but also because he's comfortable enough with his masculinity to wear both pink gloves -and- sneakers.

Mouser is better than you.

Getting back on track, I should mention that this particular representation of Bob-omb once housed a powdery candy not entirely unlike Pixy Stix. I can't swear that the taste is reminiscent of, since I never tried it. Bob-omb only interested me in that he was a toy and not the sweets that hid within his explosive and adorable frame. 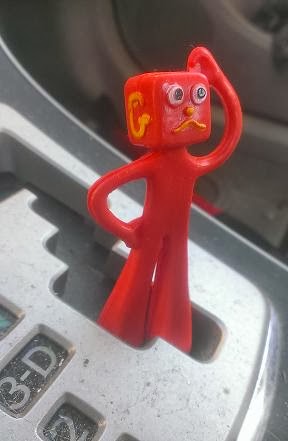 Yeah, here's Blockhead "G" on the lookout for either his better half, Blockhead "J", or his nemesis, Gumby. This little guy spent years hiding in my friend's basement, causing all sorts of mischief, I'm sure, but found himself an occupant of my infamous glove compartment a few years back. He's been hanging out there ever since, always keeping his eyes peeled for that green clump of clay that he calls "enemy". 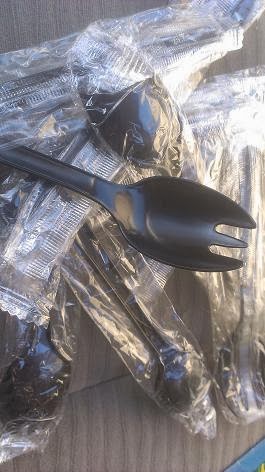 There's not much to say here. They're sporks. I keep a couple dozen sporks in my car for reasons I'm not entirely sure of. If I really had to think about it, it probably stems from a dumb inside-joke that I had with a few of those non-existent friends in high school. These particular ones came from a Taco Bell, which means they've been sitting in my car for probably something like eight years, because I don't remember the last time I had Taco Bell.

I have no plans to rectify that. I'd apologize to the "Yo quiero Taco Bell" chihuahua, but I'm sure he's been dead since 2002.

No, sorry, Wikipedia claims that the dog was actually a girl and that she was euthanized in 2009. And she played "Bruiser's mom" in Legally Blonde 2 (2003), which my sister was watching yesterday when I got home from work.

God, I hate my life. 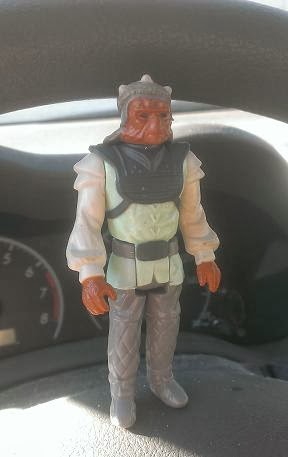 This is one of the few vintage Star Wars action figures that I own. Nikto is his alien-race, not his name, and I picked him up as part of an old Jabba's Dungeon play-set. I honestly don't recall how he ended up in my car, while his two play-set playmates, Klaatu and 8D8, didn't. He's probably the luckiest of the trio, though, because he's the only one still in my possession.

Or does that make him the unluckiest? 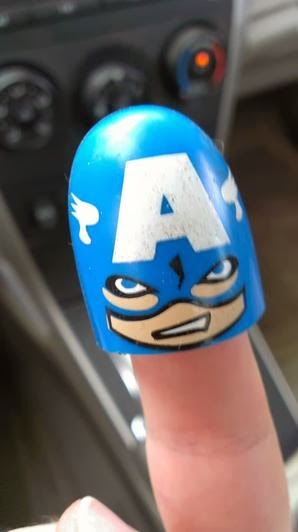 I made the joke before that this is the closest I will ever get to looking like Chris Evans, but man, it's just so very true. The Captain America finger puppet came from a vending machine, and probably cost me fifty-cents. The Chris Evans jab was technically free, but sorta' cost me all my dignity and any self-esteem I had left. 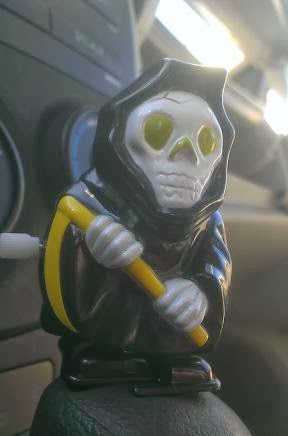 Ah, the real reason this post exists staring you right in the face. Death is always staring us right in the face, but this little guy is not meant as a constant reminder to me. I don't need a physical representation to let me know about my own mortality; I spent way too much of my teens thinking about death and other sad stuff. The grim reaper rides with me in my Toyota Corolla as something of a charm.

I am not particularly superstitious. I don't believe in much. Sure, occasionally I'll wonder if there's an afterlife or a ghost hovering behind me in a dark, unfamiliar room. I'll pretend that a penny from 1987 will be luckier for me than one from 1976, because I wasn't alive for the latter and the former was a good year for me as a kid. Really, though, I have a severe lack of faith. Darth Vader would be most disturbed.

This wind-up Death was an impulse buy from a party supply store several Halloweens back. That's all that he was meant to be. When I got home and started to get out of my vehicle, I realized I didn't feel comfortable taking him inside with me. He had to stay in my car. There was absolutely no rational explanation to why I felt this way. It was just this sudden idea that I'd be safer with Death riding with me all the time. Taking him out would be jinxing myself. Without him there, I'd end up getting into an accident, right?

I never intend to find out.

A few months back, I even bought him a friend. 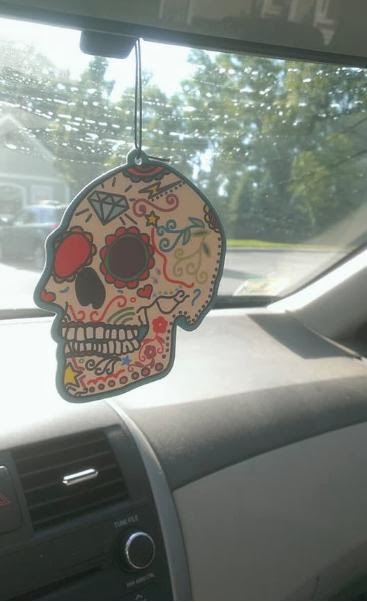