I hate New Year's resolutions, but I don't mind a good challenge.

Actually, I probably hate both things. I've never been a particularly motivated person. A quick glance at the fine details of my life could clue just about anyone in that I'm much too content with mediocrity. Happy to sleepwalk through life, armed only with a comfy blanket, plenty of unhealthy treats and enough VHS and DVDs to last however long I end up lasting. Which is precisely why instead of a New Year's resolution I'd be sure to toss aside within a couple days, I've decided instead to use this blog as the staging ground for a new endeavor. A new challenge..!

Yup, it's The Bogdanovich Challenge. 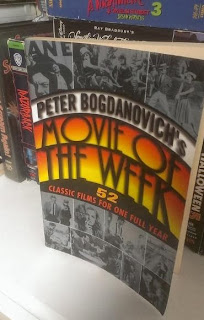 You see, I didn't just score vintage '80s action figures during my last thrift shop scavenger hunt. I mentioned before that I picked up a couple of books and up above you see what could possibly be one of my greatest victories ever... or one of my gravest defeats. Peter Bogdanovich's Movie of the Week was first published way back in 1999 and features fifty-two classic films, one for every week of the year, and I'm making it a goal to view each and every title within during their appointed weeks.

I know you're probably thinking that it's not much of a challenge to watch movies and you're mostly right. Unless you happen to live in a town with absolutely no way to rent movies besides the 'ole Red Box kiosk. It's no easy task to dig up films from any other decade other than nownownow without a mom 'n pop video store to show you some love and a few scenes from some flick that's older than you are. And, man, there are a lot of "ancient" titles lurking within Bogdanovich's book; I've seen a handful of them in the short time I've considered myself something of a cinephile, but you may have noticed my bread-and-butter tends to be junk. All the more reason to see this through to the bitter, butter end.

Tomorrow marks a new year for all of us, and hopefully a chance for me to become something a little bit better than trash.