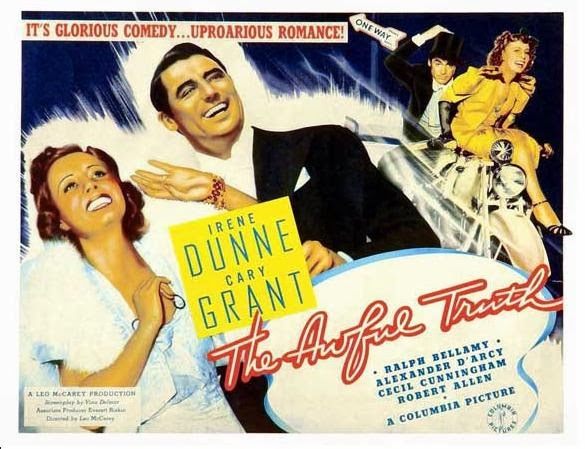 
"Certainly among the great American comedies, this remains as remarkably fresh and buoyant as ever--more so. It has, too, an adult kind of witty sophistication that is perfectly representative of the best aspects of the glorious Thirties. How did we ever get so dumbed down to the prevalent sophmoric humor of the Nineties?

The Awful Truth is perhaps the supreme example of light comedy that's also real, human, and mature in dealing with man's often frivolous idiosyncrasies and foolishness."

Of the three films that I've watched so far for this year-long challenge, The Awful Truth is the earliest released and easily my favorite.

It's amazing to think that this was Cary Grant's first real leading role, because the man is brilliant as the recently separated Jerry Warriner. He's charming in a way that doesn't quite seem possible; a little weaselly at first, but it's difficult not to let him win you over by the film's end. Even when it's his own dishonesty and distrust that destroyed his marriage in the first place. Even when he's openly sabotaging his soon to be ex-wife's new romance. It's no surprise that Grant and the word great are only a few letters off.

Actually, forget I said that last bit. What a stupid thing to say.

The real surprise is that actress Irene Dunne never received an Academy Award, despite being nominated on five separate occasions for Best Actress. That includes one for this film, where she portrays Grant's wife, Lucy Warriner.  Their chemistry together is fantastic, sure, but Dunne isn't just a pretty face for Cary to play off of. She's perfect in every scene she's in. I was impressed with how well she pulls off the comedic, but doubly so by one well-placed dramatic delivery in the final act. It's a wonderful little moment that reminds the viewer that, despite all the shenanigans and word-play, there's actually something at stake for these two former lovers.

Bogdanovich was spot-on when he referred to The Awful Truth as fresh. Even though the film is over seventy-five years old, it rarely feels dated. Definitely one that I'll be revisiting sooner rather than later.