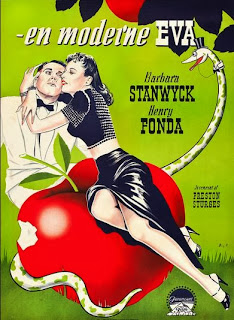 "Exhilarating fast-paced and surprisingly complicated, The Lady Eve has numerous snake-like twists, and the sophisticated moral view that emerges is also neither predictable nor easy, as it never was in Sturge's best work. The dame may be wrong, but the guy turns out to be more wrong until he learns his lesson: the battle of the sexes is an uneven one in many ways--woman having the advantage over the long haul."

Another solid pick by Bogdanovich.

This movie marks my personal introduction to the work of writer/director Preston Sturges, and if the rest of his filmography holds up as well as this, I'm going to have to seek out more. While hardly breaking new ground with camera-work, it's the whip-smart dialogue that really shines here. Sturges' strength really does lie within his writing, and it's brilliantly delivered by the film's all-star cast.

Henry Fonda's portrayal as Charles Pike, the naive and absent-minded ophiologist, is perfect. Some might mistake his performance as wooden; he's stiff when necessary, sure, but has no problem handling all the slapstick comedy that permeates the film's later scenes. He also has no trouble keeping pace with his leading lady co-star, Barbara Stanwyck.

It would be impossible to discuss The Lady Eve, even on the most basic of levels, without talking about Stanwyck. As the sultry con-artist, Jean Harrington, she almost literally steals every single scene that she's in. There is little doubt that she's always in control; whether it's seducing [and later falling in love with] Charles or out-smarting her conniving father (Coburn), it's obvious who is running the show. And, like Sturges, this was the first time I've watched one of Stanwyck's films.

It will not be the last.