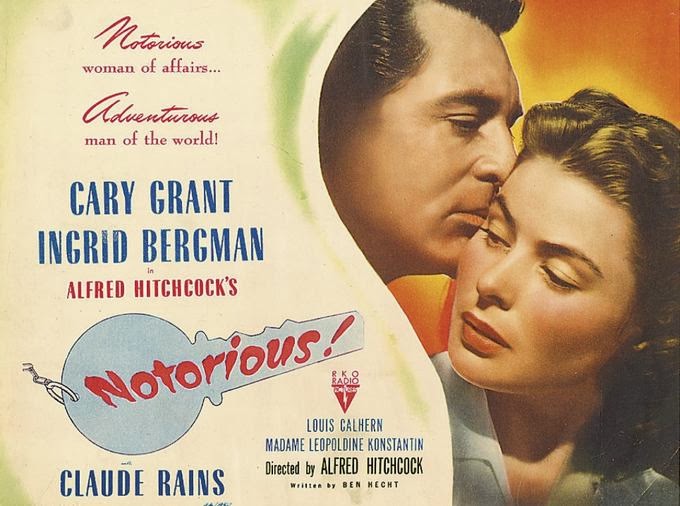 "For an absolutely unique, no-apologies. no-excuses, first-rate picture, Alfred Hitchcock's 1946 suspense success, NOTORIOUS, is the one. It is a more-modern-than-ever. ambiguous and troubling, love-versus-duty story of the early noir era: a convicted Nazi's innocent daughter (Ingrid Bergman at her most striking), wholly in love with an American spy (Cary Grant) who's divded about her, is forced to marry a renegade Nazi (Claude Rains) who's truly mad about her."

"It is arguably Hitchcock's best film, with a brilliant script (nominated for an Academy Award) that he concocted with the ace Ben Hecht."

I might have to mark these week's entry in the Challenge down as a failure. My familiarity with Hitchcock's work bends more to his later-era work; the darker (Rear Window, Strangers on a Train) and the far more depraved (Psycho, Frenzy). Oh, and The Birds (1963), of course. This one, well, this one I would argue with Bogdanovich is far from the best from The Master of Suspense.

I'm going to have to revisit it sooner rather than later, though. To give it a fair chance to redeem itself in the eyes of a sluggish Trash Man. Yeah, I had difficulty staying awake thanks to an early morning shift at work, which is maybe no fault of the film's. But with only a few hours left in the day, and the week-long window to watch and review the film, I don't have it in me to attempt a re-watch before the deadline's up.

Sorry, Hitch. I'll see you again in Week Fifteen, and hopefully then I'll be a lot less groggy.
Posted by the Trash Man at 3:45 PM