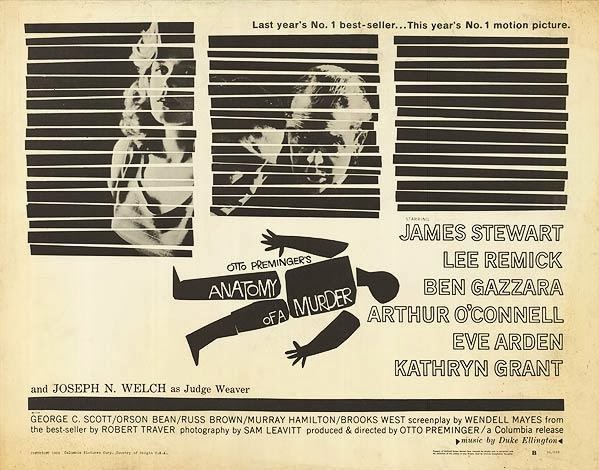 "In 1959-- when Frank Sinatra and Elvis Presley and Marilyn Monroe were red-hot --one of the finest and most important American films was released, did well, won an award or two (like the New York Film Critics' selection of James Stewart as best actor), and then passed from the scene. But it should be required viewing for anyone who cares about true quality in picture-making, America's complicated judicial system, and life's generally ambiguous pathways."

Jimmy Stewart is the "humble country lawyer" who smokes Italian cigars, like Eastwood in a spaghetti-western, and who hangs out with Duke Ellington, playing jazz music on the piano. This walking contradiction has to defend Ben Gazzara, who killed the man that brutally raped his wife. And he has to do it while facing off with the slick, city lawyer portrayed by George C. Scott.

I'm still trying to fully absorb how goddamn brilliant this film really is. Every aspect, from the performances to the cinematography to Ellington's unique score, is mind-blowing. To hear Stewart utter the phrase, "sexual climax" in a film from 1959. Insanity. Yes, a majority of the movie takes place within the confines of the court-room, and it plays out like watching an extended episode of Law & Order, but it's so much more than that. It's easy to see why Bogdanovich speaks so highly of it; why he believes it should be "required viewing".

Oh, and because of the inventive opening title sequence and gorgeous posters by Saul Bass, I mistakenly believed that Hitchcock directed Anatomy of a Murder for years. It wasn't until reading this entry in Bogdanovich's book, and ordering the film on Amazon, that I learned how wrong I was. It's completely unrelated from the Challenge [though inspired by this week's selection], but I'm definitely going to be seeking out director Otto Preminger's earlier film, The Man with the Golden Arm (1955).
Posted by the Trash Man at 2:49 PM