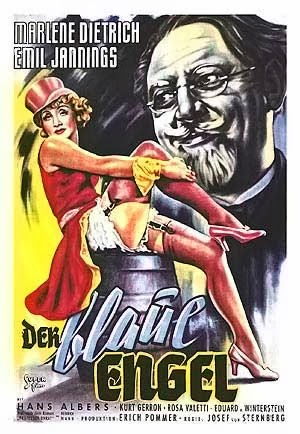 
"The amazing chiaroscuro photography, the clothing, the decor, the atmosphere: with Dietrich at her least sentimental, Jannings at his most naked, everything conspires to make THE BLUE ANGEL an indelible screen tragedy."

It's not enough that I've taken to watching the man's film selections every single week. Now, I had to look up the definition of "chiaroscuro", so thanks a bunch, Bogdanovich. If I really wanted an education, I would have paid attention in school.

I should have been paying closer attention to this particular entry from the get-go, though. While visually it reminded me of my brief infatuation with German Expressionism, films like Nosferatu (1922) and Das Cabinet des Dr. Caligari (1920), the tone of The Blue Angel was a little too light for my taste. Sure, there was an emphasis of light and shadows, a staple of early German cinema and the "film noir" genre, but a bumbling professor (Emil Jannings) teased by his students, knocking things over and being referred to as "Professor Garbage" didn't really catch my attention.

Of course, then he meets and falls in love with a saucy cabaret dancer named Lola-Lola (Marlene Dietrich), and everything starts to fall apart. Things stop being light and funny, and you'll bear witness to the lows that a man will sink to in order to win a woman's heart. And when that same woman, now the Professor's wife, finds it more and more difficult to stay faithful to her husband, that man will break. Completely and utterly, until all that's left is Der Clown; lost to the shadows and wallowing in the dredge and depravity that was once his life.
Posted by the Trash Man at 3:52 PM