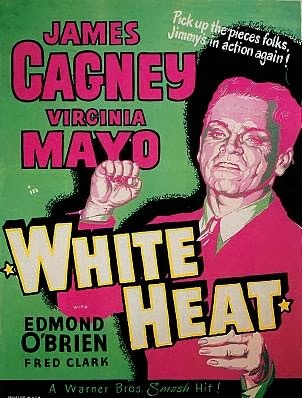 
"WHITE HEAT both revived Warner Brothers' gangster cycle of the Thirties and also ended it conclusively for the golden age, which still had about thirteen years to go. In other words, this is the climax of the gangster genre."

The Bogdanovich Challenge has allowed me the opportunity to view several films I otherwise would have ignored. That's an embarrassing thing to admit, because every single selection has been solid. There's not a single one of the first six movies that I haven't fully enjoyed. Likewise, there are performers, actors who I knew only through reputation or through references or caricatures, that I've only just discovered.

James Cagney is absolutely one of the finest.

His performance here as Cody Jarrett is fantastic. He's a psychotic mama's boy that is always on the verge of a complete and utter breakdown. There are glimpses early on, with his violent outbursts and his lack of concern for the well-being of any other human being besides himself and his mother. The only time he appears to do the right thing, like turning himself in to the authorities, is when he's trying to protect himself from a far worse fate.

And yet, you're going to watch White Heat and you're gonna sorta' root for him to get away with every horrible thing that he's done. Sure, you'll be waiting for his eventual meltdown, you'll cringe when his wife, Verna [played by Virginia Mayo], cringes any time Jarrett raises his hand, but there's this little part of you that will cheer when he gets revenge on the goons who betrayed him.

Bogdanovich shared an anecdote in his book; he and Orson Welles viewing the film sometime in the '70s together and booing the undercover cop (Edmond O'Brien) who's wormed his way into Jarrett's gang.