There were a few years where I used to spend every [or nearly every] Sunday morning at my local flea market. Rain or shine, snow or heat or potential zombie apocalypse, it didn't matter. I was there roaming aisle after aisle of used goods and discount health and beauty aids that probably "fell off the truck" instead of being loaded into the nearby Super Walmart. After awhile, I realized that I kept seeing the same old overpriced toys marked as collectibles, and booth after booth of vintage video games. All stuff that's fun to look at every now and then, but not every single week, and definitely not worth paying the prices that were being asked. So, eventually, I started going more and more infrequently, until I'd stopped going altogether.

Today was my first day back since last summer, maybe, and I managed to find a few good deals. With the weather hopefully getting warmer with each passing day, I'll probably start visiting the flea market a little more regularly from here on out. Expect to see this particular feature again in the future, but far from every week.

With that said, let's take a look and see what I scored. 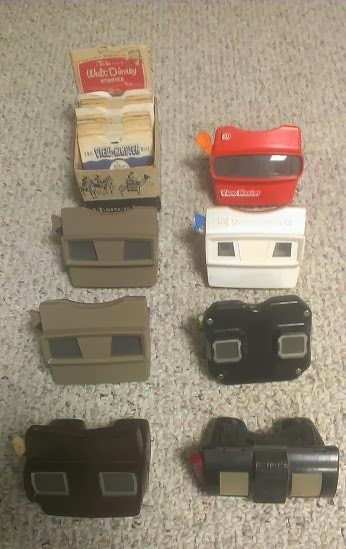 I don't think I've ever talked about my meager View-Master collection in the past.

A couple years back, at the same flea market and from the same vendor, I picked up a pair of vintage View-Masters and a single Huckleberry Hound reel. I think she charged me about ten bucks for the three items. Today's haul, which you can see up above, was a much better bargain. She charged me thirty dollars for seven viewers and a total of 41 reels. Don't worry, for the two of you that are maybe still reading this, I'm gonna take a closer look at each item. 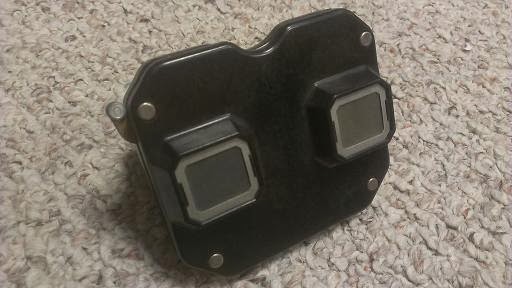 The oldest in the bunch is this fella here. The Model C Viewer, released by Sawyer's, was produced from 1946 to 1956. This model was the first one to utilize a top-feeding slot for the reels; a huge departure from the first two models, which opened and closed in a "clamshell" style and reels were inserted directly into the viewer. Since the Model C was made using bakelite, it's a little heavier than most of the viewers that were released later. 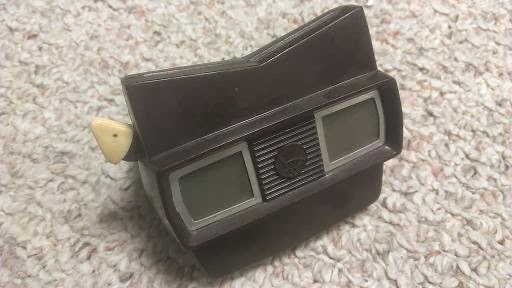 The Model E is actually my favorite style of View-Master. This is my third and probably the one I own in the best condition. Produced from 1956 to 1960, it was the last made using bakelite. It's not as colorful or "fun" as its successors, but it's still a thing of absolute beauty. I love the angles and lines and the bakelite cleans up very, very nicely. 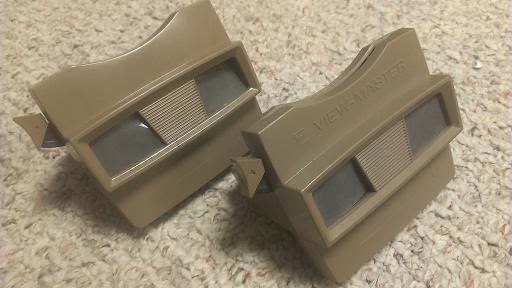 Here's a pair of Model G's in beige. These were long considered the standard style of viewers, and were produced for the longest period, ranging from 1959 to 1977. The viewer in back was the final one that Sawyer's produced, before the company was acquired by GAF in 1966. The two are nearly identical, except for View-Master and the GAF logo printed along the front of the first model. It's the only way I was able to distinguish between the two. 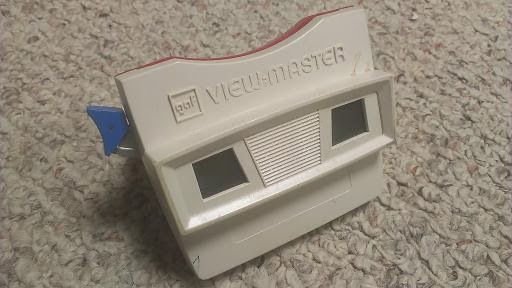 A later Model G, probably from the mid-70s, with the GAF logo in plain sight. I adore the red, white and blue color-scheme. This is my second viewer in this style, and it's probably my next favorite after the Model E. My go-to when I want to zone out in bed and just click through reels. 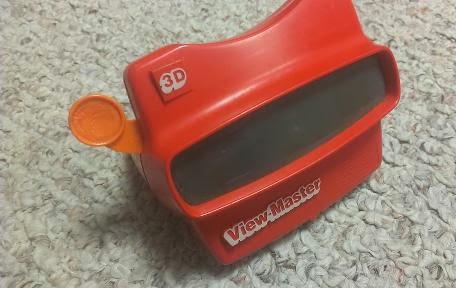 Ah, the Model L Viewer. This is the type that I grew up with, and it should be comforting in a nostalgic sorta' way, but it's actually my least favorite. Most of the viewers produced these days are straight from Mattel, but you'll find some in this style with Tyco Toys or View-Master International printed on it, instead. I see these out in the wild constantly and usually pass on them, but the vendor was selling all this as a single lot. 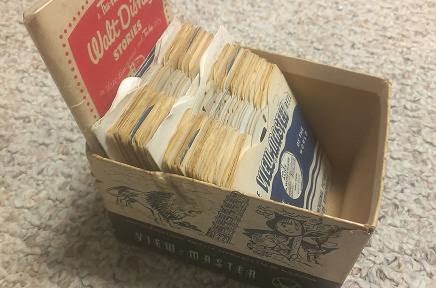 The reels were the real deal. Single ones usually sell for a couple bucks on eBay, with sets of three going for upwards of ten to fifteen, depending on their condition and subject matter. The lady selling the lot had an old Sawyer's box filled with forty-one reels, mostly from the '50s and '60s, and nearly all in good condition. A few of my favorites include Quick Draw McGraw, Superman, and Rudolph, the Red-Nosed Reindeer. There's also a Mickey Mouse Jubilee reel that's actually "The Sorcerer's Apprentice" from Fantasia. Very cool. I mentioned that there were seven viewers included in this lot, but have only shown six up until now. The reason for this is that the final one, seen above, is not considered to be a real View-Master. The Tru-Vue Viewer was owned and made by a company called Tru-Vue Inc., which operated out of Illinois starting in 1931. Sawyer's bought the company in 1952, in order to acquire the Disney licensing rights that the company held. The model seen here, the 502, was the first one produced after Sawyer's took over control of the company.

Oh, and instead of the familiar circular reels of a View-Master, the Tru-Vue Viewers use a film-card; a seven panel sheet that you insert from the top which descends though the device with each click of the advance lever.