From the Toy Vault


One of my old stomping grounds is several towns over, something of a hike to be a regular visit. And since my collecting habits have changed some over the last couple years, it's been a while since I was last there. Where I had an extra day off this past week, though, I spent it traveling about in search of ancient treasures; toys and trading cards and long-lost collectibles that should appeal to mostly no-one! 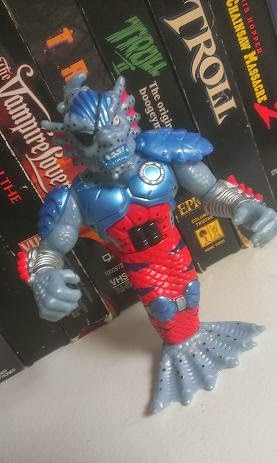 Yeah, we're starting big. Or are we?

He may look unfamiliar to some of you, but this here is Merdude, one-time ally of the Teenage Mutant Ninja Turtles. Once upon a time, I had an incredible collection of TMNT action figures. All the ones from my childhood, plus quite a few lots that I picked up on eBay back in '02/'03. Close to 150 figures, and yet this particular one eluded me. I don't have that old collection anymore; it was sold off a few years back in a moment of weakness. Desperation and a severe lack of money or whatever you want to call it.

Since I've started hitting the thrift shops more frequently, I've managed to piece together a small selection of TMNT figures. It's only about a dozen or so, I don't think I'll ever get to where I was before, but I've made it one of my collecting priorities, or uh, focuses, to try and rebuild. To own all the characters and toys I've always wanted or always wanted back. 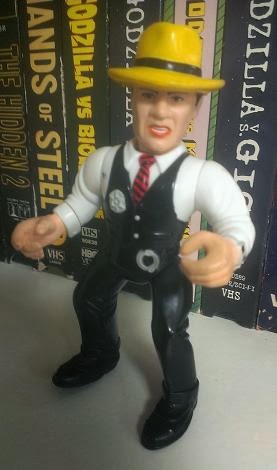 Not entirely unlike Merdude, Dick Tracy was released by Playmates in the early '90s. Tracy's toy-line was short-lived, meant as a tie-in to the motion picture of the same name. I was only eight when the film was released and I was an absolute sucker for its stylized action and ridiculous cast of characters. So, when there were action figures hitting shelves everywhere, I made sure to pester my parents until a couple found their way into my possession. Only two, though; Tracy himself and the not-so-villainous Mumbles.

Since I couldn't keep myself occupied with constant one-on-one struggles between the two toys, I eventually incorporated them into the story-lines that revolved around [surprise!] the Ninja Turtles. It only made sense, what with the similar construction and identical scale.

I have a weakness when it comes to trading cards. Always have. I remember lunch money pocketed for the sole purpose of running to the local convenience store and picking up packs of trading cards. It didn't matter if they were sports-cards, or based on an existing property like Robocop or Jurassic Park. If I could score a couple packs at the end of the week, and have enough left over for some Warheads candy, well, I was a happy, happy camper.

That hasn't changed much, obviously. Whether it's the thrift shop, the flea market or a specialty shop, if I find cheap packs sitting on a shelf, chances are I'm gonna pick up a few. Like these! I had no idea that they even made Hellraiser trading cards, and I've never been particularly fond of Clive Barker's most infamous creation, Pin-Head, but I had to grab some. If you've ever received one of my prize-packs or consolation prizes, you'll know that I usually include some random packs of cards. These will probably find their way into a future giveaway somewhere.

Meanwhile, the Marvel Universe Series II pack's already been opened and added to my collection. There wasn't much need to pick 'em up, since I already have a near-complete set of this series, but I can't resist when I find them out in the wild. You'll probably be seeing more of these in the very near future. 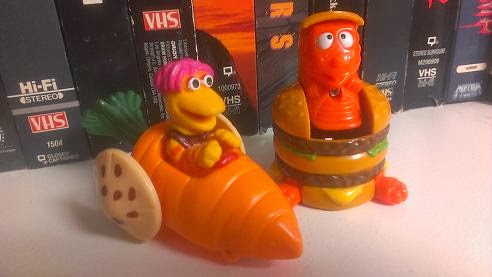 These were sitting in some bins near the register, and I didn't notice them until I was already checking out. I paused, asking if I could take a quick glimpse in the bins before I wrapped up, and the guy working the shop told me to take my time. It was probably a mistake, because now I own a Fraggle riding around in a carrot and a cheeseburger that sorta' transforms into a dinosaur. 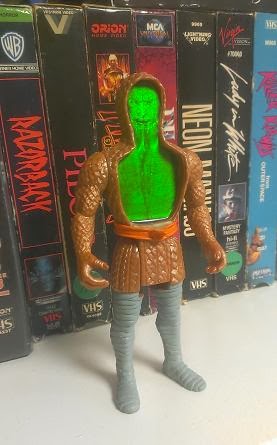 It wasn't actually a mistake, because while I was originally drawn in by those two ridiculous cheapie-toys, it also meant finding this scaly fella. The Super Naturals was a toy-line released by Tonka in 1987, famous mostly for utilizing state-of-the-art holograms. It was like they were from the future or something, and despite this, I never owned any when I was a kid. If I had to pick one to have, though, it would have been this one, the sinister Snake-Bite. I also have a weakness for snake-themed villains, apparently.

Expect a love-letter to Cobra Commander and King Hiss to celebrate Valentine's Day, I guess.