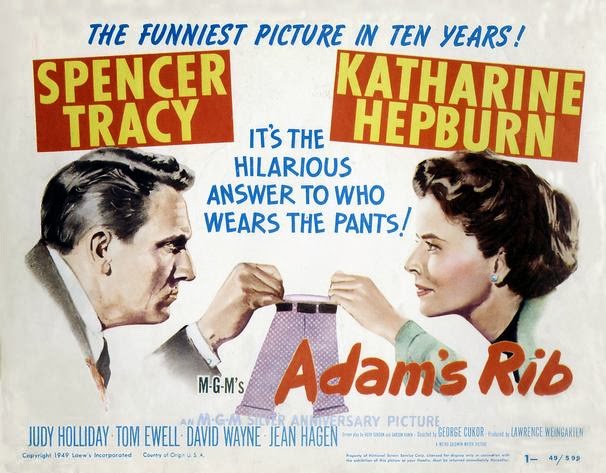 
"Of the nine Tracy-Hepburn vehicles shot during the quarter century between 1942's WOMAN OF THE YEAR (directed by George Stevens) and 1967's GUESS WHO'S COMING TO DINNER (directed by Stanley Kramer), I'd put ADAM'S RIB at the top. The real Manhattan locations certainly help to give it the edge, as does the basic premise--unbeatable in male-female conflict--not to mention Judy Holliday's scene-stealing performance, filmed while she was already wowing Broadway audiences as the lead in Garson Kanin's hit play, BORN YESTERDAY."

I'm no stranger to Hepburn-Tracy joint flicks, having previously seen 1952's Pat and Mike (also directed by George Cukor) and Desk Set (1957). The latter was my first introduction to the pair, having caught it on AMC back when they used to show actual "classic" films without commercial interruptions. This film, Adam's Rib, was their sixth together, and might be my favorite so far. Their on-screen chemistry is undeniable; it's easy to see why they were cast together so frequently and often at odds.

Here they portray a married couple, Adam and Amanda Bonner, rival lawyers whose court-case of a spurned wife who shot her cheating husband explodes into a near-literal battle of the sexes. What starts out as playful courtroom behavior quickly spirals out of control, threatening to tear apart their own seemingly blissful marriage. With neither one willing to back down, it seems that the only way the story can end is with their eventual divorce. Or a possible murder.

It really is a wonderful and clever film, though it's odd that Bogdanovich would have listed it as essential Valentine's Day viewing material. Sure, there's romance and comic misunderstandings that teeter on the brink of true turmoil, and the occasional dose of slapstick and one absolutely hilarious sight-gag at the beginning of the film. But I have to believe that there are far more suitable romantic comedies from the golden age of Hollywood than this one. Perhaps I'll even find one as a I continue this year-long endeavor.

Oh, and I absolutely adored Judy Holliday as Doris Attinger, the spurned wife. During her time on the witness stand, I was immediately struck with how similar her character's voice and mannerisms were to those of the infamous Bat-rogue, Harley Quinn. I've read other comparisons between Harley and one of Holliday's later roles in the film, Born Yesterday.
Posted by the Trash Man at 2:42 PM