The Trouble With Trash

Things have been awfully quiet around here following my last Free Giveaway and while it's creeping closer to Halloween, it was never my intention for this place to resemble a morgue. Unfortunately, the lack of updates is partially, mostly, due to my moving in just a few days. The process of cataloging and boxing up several years worth of trash has proved to be a most daunting task. One, I'm afraid to admit, that is kicking my ass. 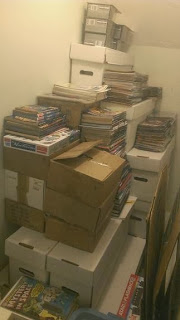 What you see above is a majority of my comic book collection.

Yeah, that's all just comics and it doesn't include the two thousand issues that I purged and sold/traded off in the last couple weeks. Also not shown are two very large Rubbermaid bins full of more comics that were never sorted from my last move, which occurred nearly eight years ago.

Nevermind all the collectibles, books, toys, DVDs/VHS and miscellaneous junk that has managed to find its way into my possession since moving back to Massachusetts.

To say that I'm feeling overwhelmed by the things that I supposedly "own" is an understatement. The free time that I've had between packing and work has been devoted to shutting down my brain and marathon-watching bad sitcoms on Netflix. The very idea that I'm going to have to physically transport all these things from here to my new home is killing me right now.

This is sounding an awful lot like sad excuses, and that's probably because I hate the fact that I haven't posted anything or contributed to The League of Extraordinary Bloggers in a couple weeks. It's doubly troubling because I really felt like I was hitting a nice groove here on the blog, maybe sorta' finding my voice and discovering a small audience of awesome readers. It means a lot that you all, that anyone, take time from your day to check out my little corner of the internet and I'm certainly not showing any love by being M.I.A.

Eh, here's hoping that I'll make another appearance in the near future. Maybe I'll have even have content that's worth taking a look at.
Posted by the Trash Man at 12:47 PM