Trash Collecting on Friday the 13th

Earlier today, after a very early morning at work and with it being payday, your third-favorite Trash Man set out on the grandest of quests. His mission was to seek out any and all Friday the 13th flicks on VHS that he could find, return to base-camp, and spend the rest of this wicked "holiday" celebrating the life and un-deaths of the one and only Jason Voorhees. Was he successful? Is he moments away from a marathon viewing of the entire franchise from the original to Jason X? Surely, it's a task that would drive anyone as batty as Tommy Jarvis! But he would endure it for you, loyal readers..!

Instead, I'm here to show you the treasures I discovered while I was out in search of Jason's analog adventures. We'll all just have to take solace in the handful of vintage [and not so vintage] goodies that I managed to score for a few bucks each. Live vicariously through my random purchases, children, and be glad. At least now none of us have to suffer through Jason Goes to Hell. 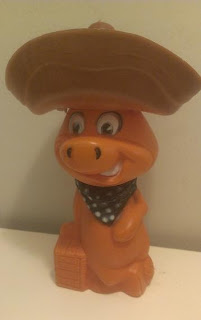 This was the first item I ran across today that I knew I couldn't leave behind. It's a plastic Baba Looey piggy bank circa I don't quite know. Apparently, there were a couple variations of this particular piece, but I'm not educated enough on 'em to know for sure if mine is an original '60s or a later [mid-'70s] release. Either way, he's cool, and totally reminds me of the early days of Cartoon Network, when they used to show all the old Hanna-Barbera shorts, like Quick Draw McGraw and Wally Gator. 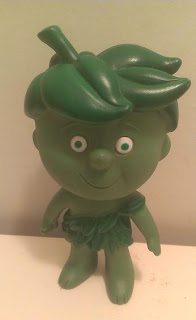 Sitting on the same shelf as Baby Looey was this promotional vinyl-figure of Sprout, who you may recognize as The Jolly Green Giant's nephew or cousin or something like that. I only remember seeing a few television spots with this little guy when I was a kid, but for a measly four-dollars, I really couldn't pass on him. I am always some kind of sucker for advertisement mascots, whether they promote a product I care for or not. 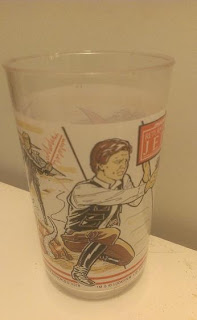 Here's a really awful looking Return of the Jedi collectible cup, which was originally available back in 1983 from Burger King. It clearly takes some liberties with the plot of the film, since the "art" on the glass shows Luke lightsaber-dueling with the Sarlacc and Han totally blowing up Jabba's barge with his trusty blaster.

Looking at pictures of the three other cups that were available, I'm now realizing that I scored the absolute worst of the bunch. Even at two bucks I feel gypped, especially knowing that instead I could have had a glass where the Ewoks worship C3P0 as their god or, even better, Salacious Crumb. 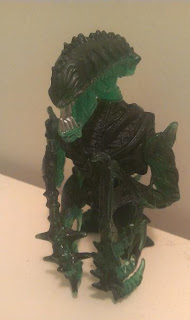 I guess that I'll just have to be comforted in the soft glow of translucent green plastic courtesy of this here beauty, the Mantis Alien. I've briefly gushed about the Kenner Aliens line before, so no need to retread that territory. I found him surrounded by newer, and far lamer, toys on a shelf near the register. I couldn't leave him there, keeping company with Ben 10 and Attitude-Era Undertaker, so I scooped him up for another couple bucks. At that price, it was all like, "Game over, Mantis", for me. I never stood a chance. 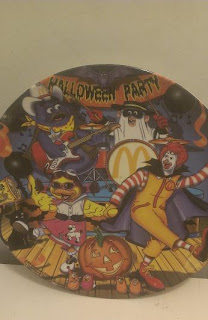 This McDonalds plate isn't something I would have normally grabbed, but with the holiday fast approaching, everything Halloween is gold to me. Released in 2001, it features Ronald and friends dressed up in costumes and rocking out to, what I can only hope is, their own personal rendition of Monster Mash. I love the Hamburglar's dedication to wearing his stupid bandit mask on the outside of his ghost costume. I adore the inclusion of the The McNugget Buddies. I'm insanely jealous about Grimace's mustache.

But I'm not entirely sold on the way-too-happy jack o'lantern checking out Ronald's ass. 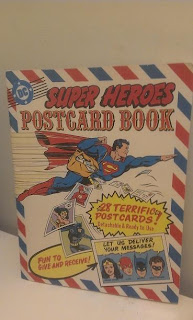 The DC Super Heroes Postcard Book is equal parts awesome and kinda' stupid. I was glad to pick it up and find that all 28 of the included postcards were still intact. Remind me to show off the best of the bunch someday, because while some of them are generic and not-at-all interesting, boy, there are a few that are inspired. I've actually got some big plans for the best cards, but that's something for another day, I think. 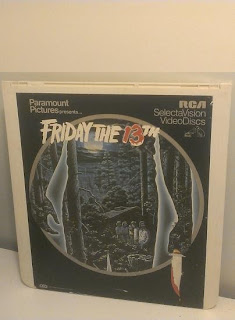 This was a true Friday the 13th miracle, because while my usual VHS hunting ground bore no fruit, I found this baby lurking in a corner of an antique co-op that I very rarely visit. I stopped in on a complete whim, found the rest of the items I've shared so far, and not too long before leaving, stumbled upon a CED-copy of the original Friday the 13th. It was tucked behind some old magazines, but I happened to notice the RCA SelectaVision logo peeking out. I nearly yelled in excitement when I saw what movie it was. Total zeitgeist!

For those unfamiliar, this is a CED [or Capacitance Electronic Disc] released by RCA in the early '80s. It's a extremely short-lived video format, where movies were printed onto vinyl discs and stored in plastic caddies. A sort-of precursor to laser discs and DVDs, the players actually used a stylus to physically read them. I don't own a player, so there's no way whatsoever I can see how good [or bad] the quality is, but on this most holy of holidays, there was no way I wasn't going to grab it.

Happy Friday the 13th, all.