Be Kind, Please Rewind: A Visit to "The Video Store" 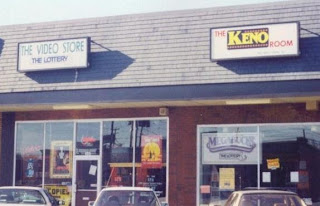 A few years back, while wandering the mean streets of the South Shore, I happened upon a most peculiar sight. Two towns over from my own, tucked away in a small plaza with a Family Dollar and a used bookstore, was a small business known only as The Video Store. Color me intrigued, I thought, and immediately wondered what color intrigued actually was. I decided it was probably like a light shade of purple, not entirely unlike that of a Decepticon's insignia circa 1985.

That particular train of thought may have been spurred on by what I discovered inside, but we'll get to that in a moment, yeah?

I wasn't sure what to expect when I walked into this business for the first time. It was 2010 and Mom 'n Pop video stores hadn't existed in my neck of the woods for a few years. Hell, even the chains were slowly fading away, leaving only a pair of sad and neglected Blockbusters nearby. Was this store a wild hallucination brought on by my desire to rent a video from somewhere real and not a Red Box or some automated Blockbuster kiosk? The opportunity to once more peruse shelves lined with cases, staring at ridiculous cover-art and dreaming of what trashy treasures awaited me upon watching the tapes or discs that lay within.

While no one had replaced the movie posters tacked up on the front windows in well over a decade, The Video Store was clearly still open. The lights were on, people [whether customers or employees, I didn't yet know] could be seen staggering about inside, and the door was unlocked. I can't remember for certain, but we'll say that I was trembling, a mixture of excitement and nervousness, as I pushed my way inside. Only to discover...

I'm still not sure what. There was one wall littered with outdated posters, but otherwise empty, save for a single television that was tuned in to a round of Keno. A small Pepsi cooler filled with cans of soda and bottled water. No aisles or shelves in the middle of the store, but instead seats and a couple tables, occupied by customers playing Keno and scratching lottery tickets. The owner and his wife behind the counter at the back of the store, selling tickets and cigarettes and nothing else to a clientele of gambling zombies, a bunch of degenerates with no interest in film whatsoever. And how do I know that they had zero interest in movies?

Because they had their backs to the other wall. The one lined with shelves full of VHS and vintage video games.

Seeing that wall for the first time was one of the most exhilarating and heart-breaking moments in my life. That sounds like an exaggeration, but it's not. For someone like myself, who thrives on nostalgia and discovering forgotten trash, it was almost a religious experience. I was suddenly facing titles, cartoons and movies and games that before that moment seemed like dreams from my youth. But they were real and I was staring at them in wonder and amazement. 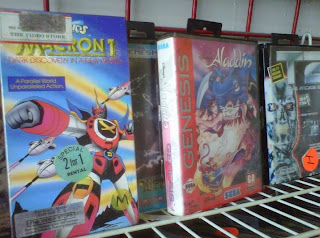 Your eyes do not deceive you. That's a row of random Sega Genesis games and, good lord yes, a VHS copy of Macron 1 circa 1990. Twenty years sitting on that shelf, waiting so patiently for me to revel in its glory.

I didn't know what to do. Obviously, this business did not operate as a real video store, but instead used the guise of one to allow customers to gamble their lives away on scratch tickets and Keno. I was an outsider, interested in these analog relics that had been left to gather dust. All I could do was dig through the shelves and shelves and shelves of lost treasures and document it, like a pop cultural anthropologist or a Class A nerd. 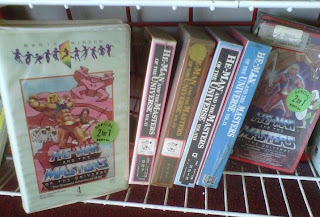 How could I not completely nerd-out at the sight above? A small collection of He-Man and the Masters of the Universe VHS. And not just the normal-sleeved RCA/Columbia Pictures releases I was most familiar with as a child, but also the Magic Window clamshells! It was almost overwhelming and I had barely scratched the surface. 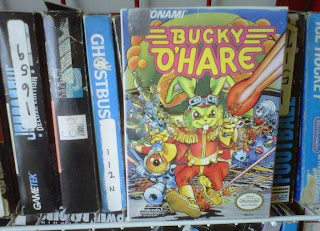 They also had a huge selection of NES titles, like the Bucky O'Hare and Ghostbusters II boxes seen above. I couldn't believe no one else had stumbled upon this place before, had never raided it like a tomb or that football team from Oakland or something. I was anxious; nervous and excited and sick at the idea that I might be the first. 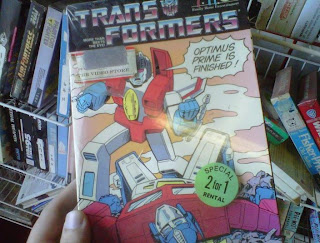 I finally dared to touch one, despite being terrified it might vanish, a will o' the wisp, a trick of light and shadow, smoke and mirrors, a goddamn teasing illusion sent only to torment me. There was no way I could resist an old F.H.E Transformers tape, though. Starscream, my favorite of treacherous Decepticons, standing triumphant over the fallen Optimus Prime. I wanted to cry when I held it in my hand, this tape I hadn't seen in twenty-plus years. It was so fucking beautiful.

Of course, I put it down and I moved on to the next shelf. And the next. Admiring rows of old Wonderful World of Disney cassettes, movies like Condorman and The Shaggy Dad and The Devil & Max Devlin. Reminiscing about using the cheat code to skip levels in the Aladdin game for the Sega Genesis. I wanted so badly to buy it all. To take them home with me and clean them up, treat them with the respect that only someone who adores useless pop culture could. They were wasted here at The Video Store. Ignored by people hoping to hit it big on the lottery. None of them realized that, for me, discovering all these neglected treasures was hitting it big! The Video Store was my lottery and I'm sad to say that I didn't win.

I left the store that day with nothing to show but a few shots on my phone's camera and the dream of someday returning to rescue those tapes.

The Video Store was not something I normally drove past, completely outside my usual routines, and so I left it alone. Never daring to stop in, too afraid that the next time I visited that the lights might not be on, the door locked, or worst of all, that all those glorious tapes and games might be gone. I'm not sure what changed, but perhaps I was tired of pretending that I wasn't dying to get back there to my Shangri-La. My Xanadu.

Last week, after those three long, torturous years, I stopped inside.

The games, NES and Genesis and Super Nintendo, were mostly gone. Someone had finally swooped in, realizing what a goldmine the place was with vintage video games, and purchased them all. I'm sure whoever they are, they made a bundle selling used copies of Adventure Island and Yoshi's Cookie on the secondary market. That was okay by me, because I didn't have a system to play any of them on, anyway. Oh, but the VHS. There's a beat-up, but totally reliable, Emerson VCR here that was starving for some "new" tapes to play.

Finally working up the nerve to speak to the owner, I walked up to the counter with a handful of boxes and asked how much.

Five dollars each, he responded.

I wasn't thrilled. While I love collecting VHS, it's something that I prefer to do on a budget. I'll buy stacks of tapes at .99-cents each. I've lost track of how many thrift shop trips ended with me and an armful of tapes. Too many, for sure, but I can never pass up on cheap, analog wonders.

Five bucks each meant I had to be very selective for my first, possibly only, purchase at The Video Store.

Enough of my long, torturous blabbing. Let's take a quick look at what I got! 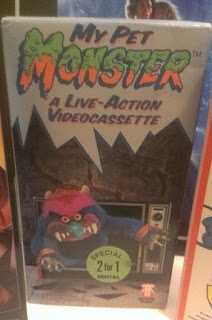 This is probably what gave me the courage to break down and eventually ask what he wanted for the tapes. Yeah, it's the My Pet Monster live-action "movie". I've never seen this, though I remember the animated series in a vague, spotty fashion. And no, I never owned the toy-version, either. My friend did, however, and I resented him for years for having what I could never have. It's probably why we aren't friends now and why I had to resort to paying five dollars for this tape to make up for past regrets. And by regrets, I mean not owning a My Pet Monster; I don't mean letting my friendship with that kid wither and die. 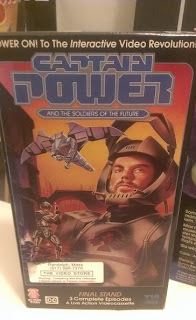 Here is three complete episodes of Captain Power and the Soldiers of the Future and the interactive segments that allowed you to battle the evil forces of Lord Dread with your toys. For those unfamiliar, the highlight of this short-lived toyline and TV show was a series of vehicles with built-in "light guns", similar to the original NES zapper, that could be used to target and destroy enemies on your home television screen. I had the Captain's own XT-7 jet, but never had any of the tapes to use it with. Now the reverse is true and I feel slightly gypped. More regrets! Power on! 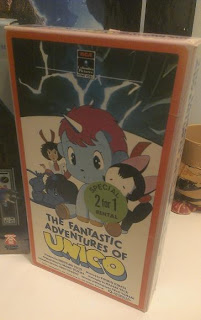 And it's this tape that may actually end up being my biggest regret of all. I don't remember how I originally saw The Fantastic Adventures of Unico as a kid. Part of me feels like they used to air it occasionally on Nickelodeon, but that could be completely untrue. Either way, this animated feature, released in Japan the same year I was born, used to bring me to tears every time I watched it. I couldn't tell you any of the specifics plot-wise, but I remember vividly how this movie made me feel when I was a child and it was sad. Total melancholy. I now firmly believe that Billy Corgan secretly wrote every song in his catalog about this gut-wrenching tale of an adorable baby unicorn and his mopey demon-friend, Beezle.

I should have named this feature Regrets and VHS. 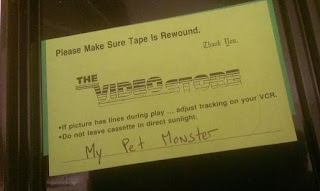