Coming to you live from a new locale, I've returned to take part in the latest challenge from The League of Extraordinary Bloggers. This week's seems tailor-made for yours truly, someone who spends his time scouring thrift shops and flea markets to add more to The Trash Pile.

When you hit up the toy store, thrift store, flea market, or comic shop, what are some of the things you’re actively hunting?

My own personal brand of collecting is a little chaotic. I'm not someone who needs to complete a run of a comic series or picking up MOC action figures or graded collectibles. I rarely have an attack plan when I'm visiting my usual haunts. That's not to say that I don't keep my eyes peeled for specific pieces, because boy, there are some items that I'm dying to get my hands on. 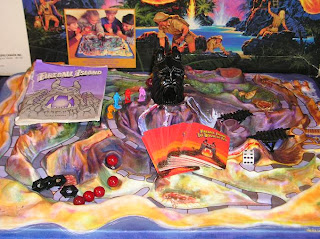 This one is a little painful, because a younger Trash Man owned it and neglected it. Yeah, it's Fireball Island. Originally released in 1986 by Milton Bradley, it was billed as, "The dimensional adventure game of pitfalls and perils!"

I can't recall how many times [if any!] that I managed to actually play this beautiful, beautiful board-game and that may be something that I regret until the day I die. Complete versions of the game sell for nearly two-hundred bucks on Ebay, which is a little outside the price range I'm willing to pay for a nearly thirty year old game meant for ages 7 and up. Still, the games and puzzles section is the first I hit whenever I visit my local Savers in the hopes that I might someday stumble upon a copy. 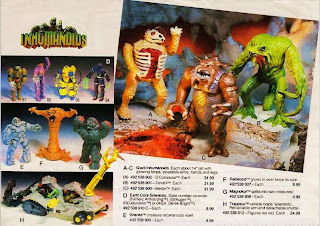 Inhumanoids is probably one of the more underrated cartoons/toylines from the '80s. A team of scientists/adventurers in hi-tech mech suits do battle with a trio of monstrous beings from the center of the Earth. And, of course, they're occasionally assisted by several bizarre, elemental-based creatures known as the Mutores.

I never had any of the toys when I was a kid, but a few of my friends did. Only one was lucky enough to own any of the giant Inhumanoids monsters, the fiery Metlar. The worst of the three, sure, but still something I'd love to have. But if I could only have a single item from the line, it'd be Tendril. There's so much I adore about a towering plant beast that sorta' resembles a Lovecraftian Elder God. 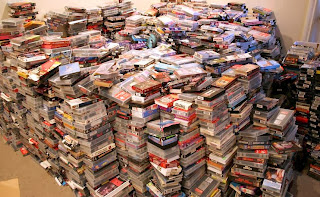 Broken record is broken record, right? After I've sprinted over to the games and puzzles "department", intent on tearing an imaginary boxed Fireball Island from the clutches of an evil toy-scalper, my second destination at any thrift shop is the wall of VHS. Things get a little less specific there, as I browse shelves in search of any title that might capture my imagination. The same one that concocted scenarios involving mint-in-the-box vintage board games.

Naturally, I lean more towards cult/horror releases than anything else, but I'm also prone to old cartoons and wrestling tapes and a completely random selection of westerns, comedies and bad action flicks. Anything analog is gold as far as I'm concerned. Except for used copies of Speed. Please stop donating them to your local Salvation Army, people, because they just pile up forever and ever and no one will ever want them.


Meanwhile, with the rest of The League--

Over at The Garage Sale of Awesome, you can discover the pitfalls of trying to score old copies of PitFall!

The Goodwill Geek gives Skeletor a run for his money, because he too wants to unlock the secrets of Castle Greyskull.

Everything retro is gold for The Nerd Nook, especially anything Super Powers and Masters of the Universe.