It's seems sometimes that the "nerd-geek" blogging community is sharing the same nerdy/geeky brain, because on every single blog there is one holiday that rises above the rest and becomes their entire focus months and months in advance.

In the immortal words of The Shaggs, "It's Halloween."

There has to be a reason for it, right? A love for scary movies or getting to wear costumes and go trick-or-treating. One night a year where we, as kids, got to break the rules and take candy from strangers. Stay up late watching R-rated slashers and classic Universal fright flicks. A time when it was okay to dress up like monsters and villains without being labeled a weirdo. Maybe it's just an appreciation for the color scheme, everything orange and green, black and purple and sometimes silver.

Or it could be that even our cereal boxes are suddenly adorned with creatures of the night? 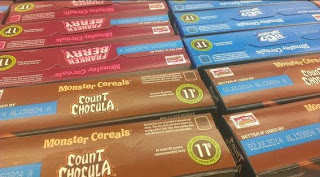 It was only eight days ago that rumors started circulating that in addition to the usual Halloween releases of Count Chocula, Boo Berry and Frankenberry, General Mills would also be releasing from their vaults the two long-discontinued Monster cereals, Yummy Mummy and Fruit Brute. The man responsible for initially spreading those wonderful, amazing words was none other than Matt, he of Dinosaur Dracula and formerly of X-Entertainment. We all trust Matt, because honestly, it feels like he's responsible for the vast majority of us getting into blogging in the first place. The guy practically paved the way for nostalgic weirdos to take to the internet and share their love of all things nerdy and dumb.

Anyway, only a short time after the initial rumors started, it was confirmed. They, all five of the monsters, were coming back this Halloween season. The masses rejoiced. The heavens shook. More stuff happened that was crazy and unbelievable, but now nothing was unbelievable because THEY WERE ALL COMING BACK.

And I already found one of 'em. 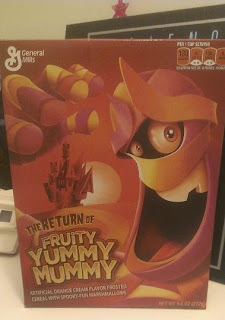 Well, to be fair, I found four so far, but I'm not counting the Count, Boo- or Frankenberry. I stumbled upon them at a local Walgreens last week, taking up an entire little display towards the front of the store. I went so far as to overcome my usual anti-social tendencies to ask the cashier if she had seen the other two cereals. She had not.

I vowed to return and claim the missing two, the ones that had eluded me my entire life. I was only two when Fruit Brute was originally discontinued, so I never had a shot of trying it. Yummy Mummy was available during the late '80s to the early '90s, but my own mummy wasn't keen on cereals with marshmallows, so the only memories I have of its short run were the ads that littered Marvel comics during those earlier years.

And then, about an hour ago, I found the now-dubbed "Fruity" Yummy Mummy sitting beside his monstrous brethren and nearly wept at the sight. Instead, totally embarrassed, I shelled out the three bucks to the very same cashier [and who, of course, recognized me] and hurried home to share the news with you.

You might be asking, after all this time, how does it taste?

I don't know! I was so excited to share the news that I haven't even opened the box yet!

It seems like such a huge event to me that it needs to be treated like an experience. Which is precisely why I have The Monster Squad (1987) loaded in my player, waiting for me to pour a bowl and enjoy the "official" launch of my own personal Halloween season. Two months early, sure, but it doesn't matter. This is my time, our time, and their time too, so let's all enjoy it together. Happy Halloween..! 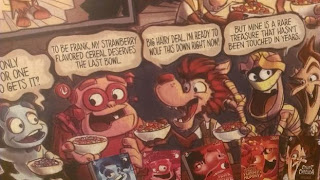