The League: Knock It Off..!


This week’s assignment for the League of Extraordinary Bloggers was an idea sent in by Poe Ghostal. Poe originally wanted the topic to be “third party toys, yay or nay,” but I thought it would be fun to open it up even further, so here goes…

I had originally planned to follow in the footsteps of other League members and take a look at some trashy pieces of bootleg toys that clutter my collection. However, somewhere over the years, I'd traded away or sold most of my favorite Transformers and Gobots knock-offs. It didn't leave me with a whole lot to share with you. Actually, I managed to only have one piece left and then this guy went and stole my third-party thunder! The nerve! 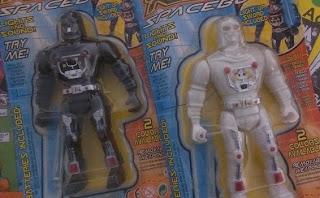 The Goodwill Geek's favorite Space Defender, Garth Nadir, is nothing more than a glorified Robot Spacebot and I have the proof. In both of the two colors available!

So, now what is a poor Trash Man to do?

Yup, that's right. It's time to take a peek at some comics.

I could easily churn out a quick post by taking a look at all the rip-offs and cash-in duplicates of old favorites like Superman and Batman. Maybe a little history lesson on how, at one time, a cheap knock-off by the name of Captain Marvel [that's Shazam! for all you youngsters] was actually outselling the Man of Steel's books. It's been done before and by far better writers than myself. Plus, sometimes I like the B- and C-level imitations better than the originals.

Then I remembered a local comic convention I attended with an ex- a few years back. Digging through long-boxes of cheap back-issues for forgotten gold together, we found quite a few treasures that reminded us of a much more well-known property. A pop culture giant that spawned all sorts of imitations and pretenders.

Again, I could share a long-winded, poorly-written history lesson with you about the creation of the title by Eastman and Laird and how it became an absolute juggernaut that would conquer the shelves of toy-stores, movie theaters and home television screens around the world. Instead, I'm just gonna pick a handful of small-press/independent titles from the mid-80s that attempted to recreate the magic and success of TMNT. Or at least poke fun at it. 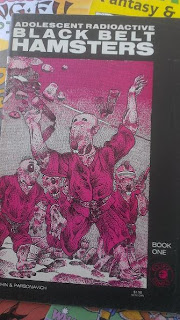 First up is the original spoof of Teenage Mutant Ninja Turtles and probably the most recognizable. Adolescent Radioactive Black Belt Hamsters was published by Eclipse Comics in 1986. Created by writer Don Chin and artist Parsonavich [seriously?], it followed the exploits of four normal hamsters who were shot into space by NASA in 1977. Their experimental rocket was doused in radioactive cosmic jello, which mutated them into human-sized creatures that crash-landed in Tibet. There, they mastered martial arts, attaining their black belts, and ventured out into the world to combat evil, like thugs and gangs and stuff.

The series ran for nine-issues and supposedly there was talk of a revival as recently as 2008. 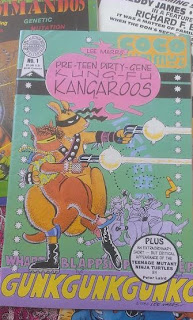 Pre-Teen Dirty-Gene Kung-Fu Kangaroos is actually my favorite of the bunch. Lee Marrs handled both the writing and the art. And Blackthorne Publishing released it at the end of Summer 1986. Where the Turtles and Hamsters both told tales of humanoid-animals in a more real-world setting, the Kung-Fu Kangaroos' world was inhabited by nothing but animals. They were six "normal" kangaroo-students from Australia who were caught in an explosion at a bio-tech lab while on a tour and granted fantastic powers.

There's actually a very brief appearance by Donatello that Peter Laird himself illustrated in a single panel. Something the cover is all too eager to mention and who can blame them? This was just prior to the Turtles' exposure on TV and the release of their action figure line by Playmates. 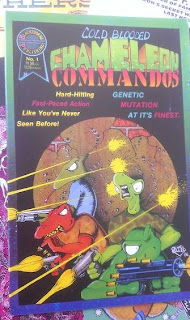 Here's another book released by Blackthorne Publishing the very same month, Cold Blooded Chameleon Commandos. Billed as "Genetic Mutation at it's Finest", it's the adventures of four ordinary chameleons subjected to government experiments to create the ultimate fighting force. The cover reminds me a lot of the far superior satire, Dinosaurs For Hire, which actually wouldn't be published for another two years.

It's by far the worst I've seen of these knock-offs, with crude art and awful jokes. The only redeeming thing from the entire issue is a battle with a mantis-man adversary. That they then dispatch with a can of RAID in a predictable, cliched climax. Stupid. 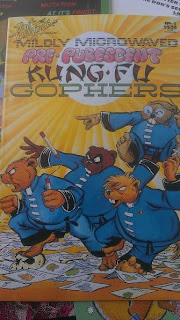 I don't have much to say about Mildly Microwaved Pre-Pubscent Kung-Fu Gophers. It came out a month before the two previous entries, released by a company called Just Imagine Graphix, and was created by George Macas and Jim Molina. The heroes are four hamsters caught in the blast of a Microwave Bomb the government was testing, not entirely unlike a certain Rampaging Green Goliath, who cross paths with a camping kung-fu master named Kung. Naturally, he decides to take them under his wing and train them in the ancient arts of fighting.

Which they use to beat up some old ladies and get into a pie-fight. I take back what I said before about the Chameleons' title. This is the worst of the bunch. 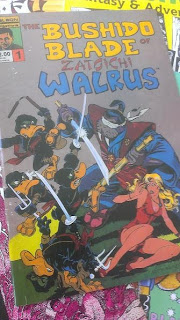 The best lookin' of the books is easily The Bushido Blade of Zatoichi Walrus. I almost didn't want to include this one, because it really owes more to the epic film series, Zatoichi the Blind Swordsman and to Stan Sakai's brilliant comic creation, Usagi Yojimbo. This one was published by Solson Publications, written by John Holiwski and illustrated by Chuck Wojtkiewicz.

You might be asking why, prior to TMNT's toy-line and screen success, there would have already been so many imitations and I'm gonna leave the answer in the form of this panel from the original Turtles' knock-off, Adolescent Radioactive Black Belt Hamsters. 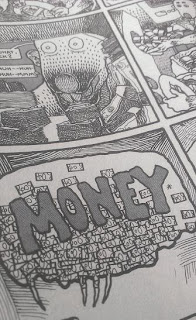 Which, sadly, I doubt any of these made.

The man who stole my original idea for a post, and subjected you to all this nonsense, is none other than The Goodwill Geek. Be sure to thank him.

Miss M shares a sad story of having to resort to collecting Power Ranger bootlegs. Also, there's talk of Golden Girls, but no mention of Bea Arthur? Go cry foul.

Pop Rewind looks back at a lifetime of bootlegging VHS, so how could I resist?

I never had that Street Hawk G.I.Joe when I was collecting them, which I totally regret knowing I missed, so thanks to Rediscover the 80s for ruining my life.

And for all the rest, be sure to check out Cool & Collected..!