The League: Nightmares and Dreamscapes 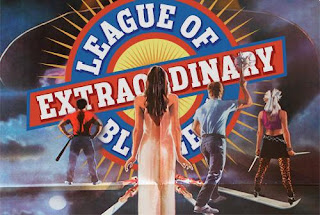 Last week's topic for The League of Extraordinary Bloggers dealt with dreams and it shouldn't be too surprising that I decided to skip out on that one. Ever the defeatist, it's easier for me to focus on the opposite, which is why this week's is tailor-made for yours truly. In three simple words--

I was easily frightened as a child, whether it was by horror films [or the commercials for them], spiders or the bad dreams that were constantly plaguing me. And there were plenty of those. Everything from Freddy Krueger to E.T to a twisted version of Sonny, the Cocoa Puff Bird haunted me, robbing me of peaceful slumber. There were the always terrifying nightmares within nightmares, where I would awaken from a bad dream, "safe" in the belief that I was back in my bed. Then something horrible would pop out from nowhere to devour my soul right before I would wake up for real. Yeah, I've got no shortage of things to talk about when it comes to nightmares.

But instead, I'm going to look at an old episode of G.I.Joe: A Real American Hero. 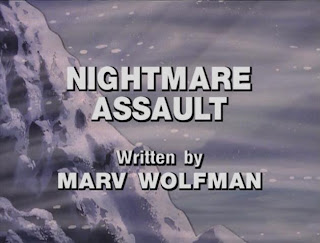 For the leader of a "ruthless terrorist organization", Cobra Commander came up with some absolutely ridiculous plans during his tenure. Menacing the world with robotic sea serpents and evil fun-houses doesn't seem like very effective ways of conquering it. So, after two mini-series and a full season of bumbling, he was replaced by Serpentor, who was meaner, tougher and carried the snake-motif further than any who came before him. However, like his predecessor, he also concocted his own share of stupid, stupid schemes. 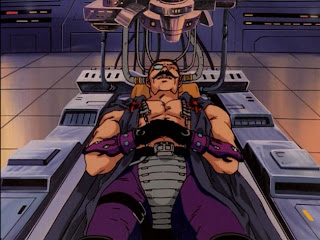 Like commanding Cobra's resident dentist-turned-mad scientist, Dr. Mindbender, to build a machine that would allow them to control the G.I.Joe team's dreams for, uh, reasons. 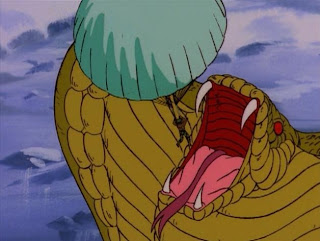 It mostly translates to to an episode packed with various "nightmare" sequences that involve one of the Joes' greatest fears combined with a giant, fire-breathing king cobra. Viewers get the full picture for some, like General Hawk, who is terrified of making the wrong calls, the sort that lead to his entire team dying in battle. Of course, then he's also forced to bail from the flaming cockpit of his jet into the gaping maw of a monstrous snake. 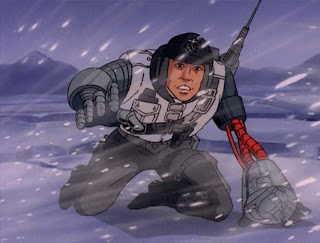 There are others that we only get glimpses of, but they're still pretty great. Mainframe, one of the team's two tech experts, slowly transforms from man to machine. While Dial-Tone, the other, loses his ability to speak. Tamer, sure, but a no less horrible fate for someone who specializes in communication. 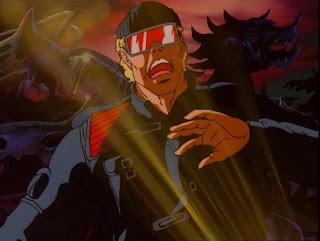 The star of the episode, though, and my entire reason for sharing it with you, is Low-Light.

It's his nightmare sequence that steals the show and left a lasting impression on me as a child. The expert marksman finds himself in a junkyard, surrounded by demonic-looking cars and haunted by the disembodied voice of his father berating him. Piecing it together from this scene, it appears that Low-Light was terrified of the dark as a young boy. Considered a wimp by his dad, he was apparently left alone in a salvage yard until he could provide his father with twenty rat corpses.

Yeah, no wonder it left such an impact. 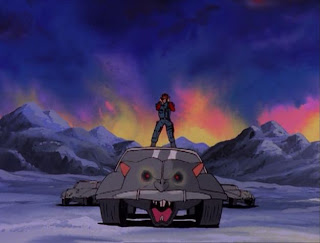 A lifetime of traumatizing dreams is what eventually allows Low-Light to overcome his fears and save the "day". When Mindbender finally enters the Joes' dreams himself in a final bid to destroy them, it's Low-Light and a trio of rat-car hybrids that come screeching to the rescue. It all leads to a showdown between the floating, fiery head of Dr. Mindbender and a gigantic version of Low-Light, which ends with the latter throwing a block of ice and vanquishing the former.

I don't know if it's inspired or idiotic. 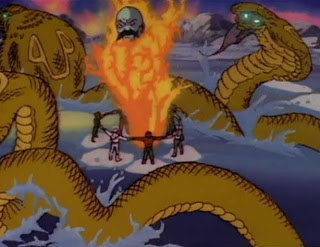 Meanwhile, with the rest of The League--

Random Nerdness has a Top 5 list that includes A Nightmare on Elm Street 4, which has a salvage yard scene that's eerily reminiscent of Low-Light's dreams.

Another list from Goodwill Hunting 4 Geeks features some of my absolute favorite fright flicks and a personal nightmare I'm glad I'll never see.

Vikki Verka dreams she's a man and it just gets worse from there.

And for all the rest of The League's contributions, check out the comments here.
Posted by the Trash Man at 12:54 PM