Adding to the Trash Pile

So, I believe it was mentioned before that I occasionally struggle with impulse control. This usually means coming home from a store or flea market or yard sale with items that no one, especially myself, has any need for. Sometimes the price is too right and sometimes I just get giddy over the prospect of owning ridiculous things. No matter the reasons behind these purchases, they are completely unnecessary, save for the concept of retail therapy. I work retail and need to buy things to alleviate the negative feelings from such a meaningless and thankless "career" choice.

Let's muster up some faux-enthusiasm and take a look at the many things I bought this past week! 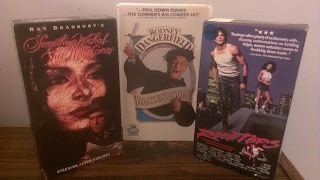 It's not something that I've really touched upon here yet, but I have a fondness for outdated media formats. Especially VHS. I could easily rattle off the reasons for this-- growing up during the peak years of VHS, working in several video stores in my teens/early 20s, the high number of titles that are still not available on DVD/Blu-ray --but a lot of the time it boils down to how cheap they are these days. At least once a week, I will visit a few local thrift shops and dig up some .99-cent treasures. Above is this week's finds.

The only one of these that I've seen before is Rooftops (1989), but it was a few years back and with a large group of friends, so I don't remember much aside from the concept of "combat" dancing and something about drug-dealers. I honestly can't recall if there were even many scenes on rooftops or not. Regardless, it received three stars from Lucy Keyser of The Washington Times and that's enough for me.

Normally, I'd have left Back to School (1986) on the shelf at Savers, but this particular release appealed to me because of who distributed it. HBO/Cannon Video [formerly Thorn EMI/HBO] releases aren't highly sought after by most VHS-collectors, but I seem to gravitate towards them for nostalgic reasons. You can check out the cover-art for more Thorn EMI/HBO/Cannon releases here and hopefully reminisce like I always do. Totally dig [and own!] The Hills Have Eyes Part II and The Return of the Living Dead art.

Something Wicked This Way Comes (1983) is based on one of my favorite novels by Ray Bradbury. It seems an odd choice for Disney to adapt into a movie, but I've heard good things, despite them not casting Christopher Lee as Mr. Dark like Bradbury had originally wanted. This particular copy was still sealed when I bought it, which is an added bonus. 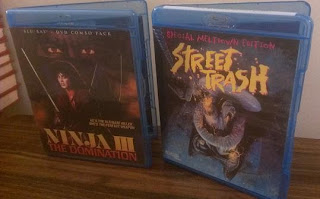 More movies, but a little more current in the chosen format. Ninja III: The Domination (1984) is a lovely blu-ray/DVD combo released a couple months ago from Scream Factory [an offshoot of Shout! Factory], who have been absolutely killing it with their releases. They've cleaned up and released an incredible number of cult/horror films on blu-ray, added all sorts of bonus material, and I wish that I had the money to keep up with their expanding library. It's overwhelming the sheer amount of awesome they've already made available.

Likewise, Synapse Films has scoured the world of cult cinema, both domestic and foreign, and uncovered dozens of amazing flicks. That includes Street Trash (1987), which I never worked up the nerve to watch before, but used to obsess over the box-art when I was working my first job at our town's old, mom 'n pop video store. This Special Meltdown Edition just came out a couple weeks ago and I had to have it. 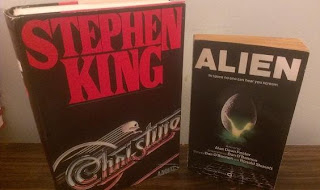 I'm not much of a bibliophile these days, but I'll still pick up some titles when they catch my eye and when they happen to cost less than a cup of coffee. I already owned a copy of the Alien novelization, but couldn't pass up on a second one for a mere .99-cents.

I was a huge fan of Stephen King's during my early teens, devouring book after book for a good two or three years, before moving on to junk like Star Wars and Mutant Chronicle novels. Somehow, I never managed to read Christine, so I picked up this copy to remedy that. It doesn't hurt that it's a First Edition and even if the jacket is a little worn and torn, I was still pretty excited to find it. 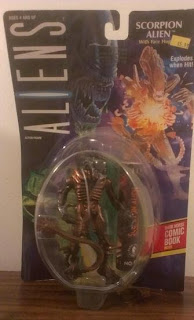 There isn't a week that goes by where I don't rush on down to my local comic shop to pick up my monthly titles. Somehow, I must have not been paying attention, because they had a whole section of Kenner's Aliens figures [circa 1994] still on the card that I hadn't noticed until last weekend. The Aliens line was one of the last toy-lines I obsessed over before junior high, when it suddenly became social suicide to admit to still liking action figures and toys. All the original figures I owned are gone now, but I still couldn't pass up the opportunity to pick one up for six bucks.

I never owned the Scorpion Alien before, and it appeared to be the closest one in appearance to the iconic xenomorph seen in the films, so it's the one I got. I might go back and grab the absolutely ridiculous Bull Alien at some point, though. 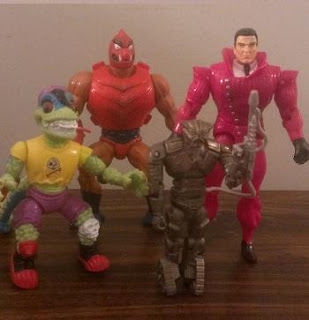 Nerd Rage Toys caught my attention a while back with the selection of product that's available. While they have mainstay toy-lines like G.I.Joe, Masters of the Universe, Star Wars and Transformers, it's the odder, more obscure ones that drew me in. Up above is a small variety of figures that I purchased from them. I owned most of these at one time as a kid or teenager, with the exception of Buttons McBoomBoom [from the short-lived C.O.P.S cartoon]. He's missing his fedora, but did include his trademark submachine gun concealed in a violin case and that is a perfectly acceptable trade-off. Fedoras are dumb, anyway. 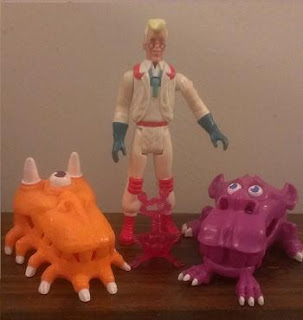 A few of the items I bought from Nerd Rage Toys were from their Bargain Bin, which has very affordable items in mostly good condition. The Fright Features Egon has a broken tie, it's snapped off and missing, but that was exactly what happened to the one I owned as a kid, so I actually kinda' enjoy owning a new one in the same condition. The two "Mini-Traps" are actually in great shape and work perfectly, but I'm not sure which of the two is my favorite. God, please don't make me choose. 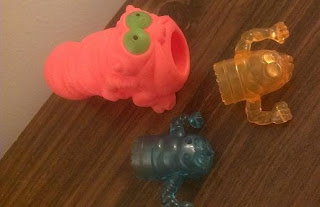 Yes, it's the Boo-Zooka. Another beautiful piece from the Real Ghostbusters! line of toys. I love how pink it is and I love the translucent "boo-lets" that are included with it and this is easily the best sentence that I have ever written, so I may as well stop because nothing will ever, ever top it or my passion for these toys. 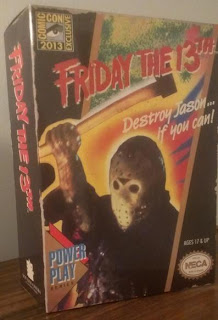 No, I did not go to San Diego Comic-Con, despite how badly I've wanted to go for several years now. NECA Toys was kind enough to offer a couple hundred of these babies on their website every day of the convention and I must have been really good in a past life, because I managed to get my hands on one.

It's the SDCC Exclusive, Glow-in-the-Dark, 8-Bit Jason figure. Based on the awful [but awfully addictive] Friday the 13th game for the NES, this is easily one of my favorite things ever for the next few weeks. I was never a huge fan of the Friday the 13th series as a kid, too terrified of horror movies at that young age, but over the last decade or so, I've developed a certain fondness for the hockey-masked killer.

I have no plans of opening the package, though I did remove the shrink-wrap from it, so I could enjoy every inch of that spectacular packaging. It's so beautifully done and how can you not totally dig the NES-homage, NECA logo?  Gold stars for everyone involved in the creation of this majestic piece of trash. 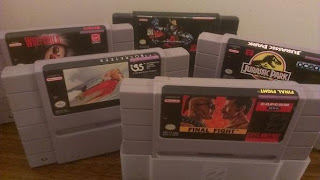 Oh, and here's some SNES games. I don't have much to say about them, so this will be quick, because goddamn I've bought a lot of junk this week and I'm running out of steam.

-- The Rocketeer is terrible and I wish I didn't waste the couple bucks on it. I might smash it, still undecided.

-- I'd never heard of Wolfchild, but it seems like a serviceable side-scroller with a lycanthropic hero, so there's that, I guess?

-- I honestly thought Jurassic Park would be the same as the Genesis release, but it's not and I don't like it as much. There's some okay, Wolfenstein-style shooter levels to it, though.

-- Killer Instinct is a bastard fighting game, but I still sorta' enjoy it. Also, black cartridge is super-cool.

-- Last, definitely not least, Final Fight is everything that I remember from playing at my friend's house when I was a kid. Mad Gear Forever. 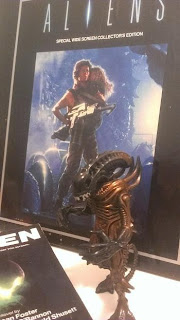 Oh, and I opened the Alien figure.