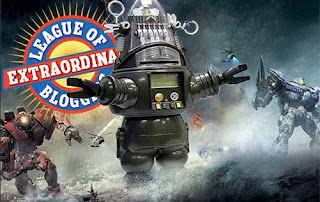 Straight from the heart and soul of The League of Extraordinary Bloggers, Cool and Collected, comes this week's assignment--

Danger! Danger! Danger! Pacific Rim has finally hit the theaters, and it seems like everyone is now an expert on giant monster-fighting robots. I thought it would be fun to talk about all the different mechanical wonders that have appeared in our pop culture. This week’s assignment for the League of Extraordinary Bloggers…

Yeah, this is quite the topic, rife with possibilities for someone who grew up during the '80s and early '90s. It was a time of Transformers and Robotech, Gobots and Short Circuit, and goddamn Vicki from Small Wonder. Hell, even Screech had a robot hanging out in his bedroom and it is totally surprising that Lisa Turtle never wanted to sleepover because of that. There are enough robotic "friends" from my childhood that I could compile a Top 100 list and still have room left over to rave about the ED-209.

Instead, I'm gonna take a look at one of the more recent additions to the ever-growing list of mechanical wonders who have tugged at my heart-strings. 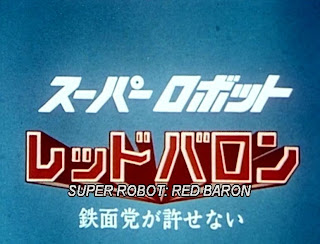 I discovered this incredible tokusatsu program while wandering my local Best Buy a few years back. The now defunct BCI Entertainment had just released a six-disc set which featured all 39 episodes from the show's original run (1973 to 1974). I was previously unaware, far from blissful, of Red Baron's existence, but the appearance of a giant robot on the cover caught my eye. Within moments of reading the description on the back of the package, I had purchased the box-set and was on my way home to introduce myself to the colorful world of Red Baron. 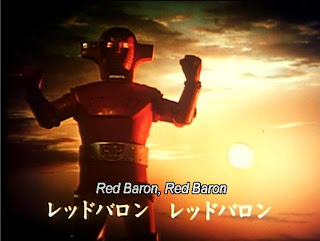 The premise is a pretty simple one-- the villainous Dr. Deviler and his "criminal" organization, The Iron Alliance, raid an international exposition, stealing all but one of the giant robots on display and kidnapping several super-scientists. Only one, Kenichero Kurenai, resists the evil empire and manages to entrust his own creation, Red Baron, into the care of his younger brother, Ken. Now, it's up to Ken and his allies in the S.S.I [Secret Science Investigation, 'natch] to stop the mechanical hordes unleashed by Dr. Deviler and save the world. 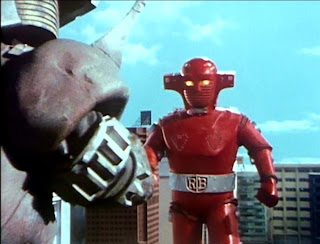 Having grown up watching tons of Japanese "monster" flicks like Godzilla and Gamera, I immediately fell in love with the low-fi, practical effects that the show uses to stage battles between Red Baron and his monstrous, mechanical opponents. There's painted backdrops and guys in rubber suits that don't look the slightest bit metallic. Miniature cities that exist for the sole purpose of being trampled and torched by gigantic machines. There are so many goofy and endearing things to gush over in the show's single season. 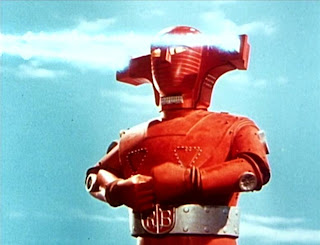 Red Baron really is just a child's favorite toy brought to life. Piloted by a young secret agent and armed with all sorts of powers and ridiculous gadgets. He has missiles that fire from his chest and the "Elec-Trigger", which can shock his opponents into submission or just totally annihilate them with a single blast. 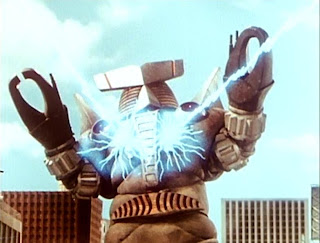 I would definitely recommend seeking out a copy of Super Robot Red Baron on DVD. Amazon has a couple different copies up for sale, and while one, the more recent release by Mill Creek, is certainly very affordable, I'd suggest skipping it. Like their releases for both Ultraman and Iron King, the company reduced the number of discs from six to four, which means the episodes are more compressed and lose quality. I've also read reviews that mention the extremely poor quality where subtitles are concerned, which is not an issue with the earlier BCI releases. In either case, I strongly recommend the series for anyone who loves giant robots, '70s-style action and Bicycle Inspectors. 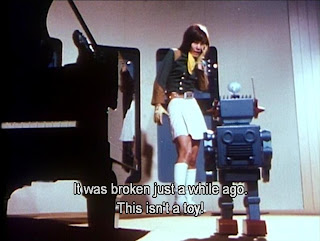 Over at AEIOU & Why, they take a look at the "Sandminers" from classic, Dr. Who, which is only one of the incredible picks you'll find there.

Miss M goes from fearing our eventual robot-masters to adoring them. She may even want to become one someday!

Goodwill Hunting 4 Geeks shows off some of his collection and it's okay to be envious, right?

Vikki Verka features some classic kaiju-fightin' mechs and they are beautiful.

And a good place for those who need input, The Nerd Nook, has a Top Ten list that highlights a certain Number Five who is near and dear to my mechanical heart.
Posted by the Trash Man at 12:58 PM