It's time again for The Trash Man to dig up old memories and forgotten treasures in the name of The League of Extraordinary Bloggers. I've got a real challenge ahead of me, "hanging ten" on a wave of nostalgia that could threaten the entire Eastern seaboard, because this week's topic is--

Summer is a time of first loves and first-run movies, and sometimes those two things can be one and the same! This week’s assignment for the League of Extraordinary Bloggers…
–

It feels like the first time… Write about your first experience with something.

Something could mean anything and I've experienced a lot of first times after three decades on this planet. There are favorites holidays and first loves and Sonic Youth concerts and traumatic viewings of Night of the Living Dead at age four that I could share with you, but it seems that I will once again slip into my comfort zone and talk comic books. Or more importantly, my first comic book. 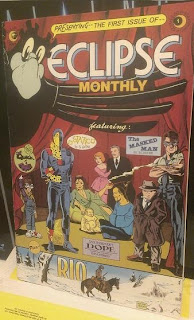 And it just so happens to be the premiere issue of Eclipse Monthly, published August, 1983.

I was only a little less than two years old when this book was originally released and a copy of it wouldn't come into my possession until the summer of '88. Just prior to summer vacation, actually. My first grade teacher decided to treat her students to a parting gift during the last week of school. All the boys in the class received a random comic book [I honestly don't recall what the girls got] and I'm sure Mrs. Monahan didn't know what she was starting when she gave me this gorgeous, small-press anthology book.

Up until this point, I was only familiar with comic book heroes through other mediums, cartoons like Super-Friends, Spider-Man and his Amazing Friends and Defenders of the Earth, or live-action fare like The Incredible Hulk. We were still a year away from absolute "Bat-Mania" thanks to the theatrical release of Tim Burton's Batman and Teenage Mutant Ninja Turtles still hadn't made their true mark on the pop culture landscape. A six-year old Trash Man needed heroes and this single issue would provide several that he would never, ever forget. 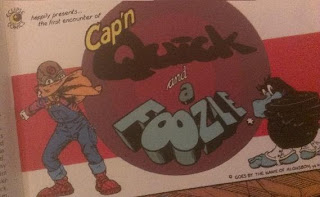 Cap'n Quick and a Foozle was the first feature and naturally it appealed to me because the story's "hero" is a young boy who, while tinkering with electronics in his basement in an attempt to become a costumed adventurer, is transported into another dimension, full of menacing creatures, "Santa Claus" and a Foozle named Klonsbon. The story was written and illustrated by Marshall Rogers, best known for runs on both Detective Comics and Silver Surfer, and was a continuation of the Foozle's misadventures in the pages of the black-and-white Eclipse Magazine two years prior. 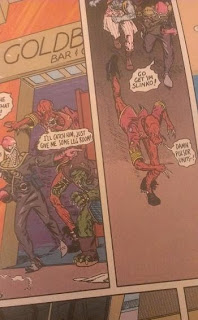 It also marked the first time in my young life that I would witness a bizarre, long-legged creature utter the word, damn, while chasing after our heroes. This single event would inspire me to become a foul-mouthed, track-star later on in life. 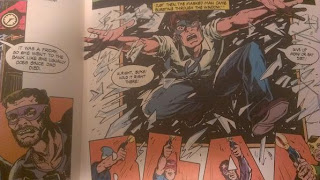 The second feature to grab my attention was The Masked Man, by B.C. Boyer. This was more a throw-back tale, paying homage to non-powered, masked crime-fighters like Will Eisner's The Spirit and The Green Hornet. Told from the point of views of a reporter, Barney McAllister, and a young boy named Delbert, it's a simple story about a bank robbery turned hostage situation and how The Masked Man appeared to save the day. 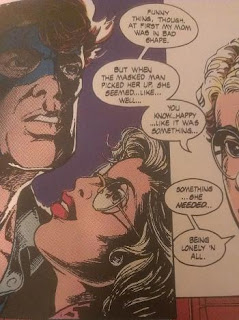 She's wounded during the ensuing battle and whisked away to safety by the costumed hero. It's actually a pretty wonderful moment in an otherwise serviceable but bland story, and it went right over my head at that age. I guess six-year olds are more interested in colorful costumes and biff-bam-pow hijinks. 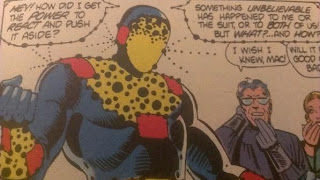 Which leads perfectly into the book's final tale, Static, illustrated and written by the legendary Steve Ditko. I have mentioned him here a few times before and this also serves as my first time with his work, despite not knowing who he was at the time or what he was responsible for creating. Since then, I've become a huge fan of his [second only to "The King", Jack Kirby], admiring everything from his Dr. Strange stories in the pages of Strange Tales to Shade, the Changing Man to his run on Rom, Space Knight and the creation of Speedball.

Here, he creates another oddly-detailed and brightly colored superhuman, one who is granted special abilities after an experiment gone wrong. All thanks to a few meddling criminals who look like they stepped out of one of his Amazing Spider-Man panels from the '60s. Ditko's dialogue can be stiff at times and his characters extremely outdated, but it's his unique visions and iconic figures, not his ideologies that will always take center-stage. 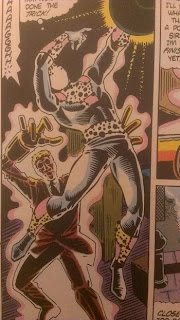 I always knew The Goodwill Geek was a kindred spirit. I like trash and he digs Garbage [Pail Kids].

Over at Nerd Rage Against the Machine, Big J shares the many mishaps of owning his first car.

And Miss M reveals the mostly true origin of her obsession with a certain Princess of Power.