Seven Random Picks From The VHSPS


While most spent this Blackest Friday waking up early to assault one another for Westinghouse televisions and dirt-cheap copies of Connect 4, yours truly was out there at 1am to sell the crazies Ipads and Xbox Ones and other expensive electronics. If my poor choices didn't lead me to a life of retail, I would have gladly slept in and eaten leftover squash pie for breakfast. No need to try and beat the crowds for door-busting deals for this Trash Man. There's still plenty of days left to shop and lots of great deals to be found online.

For those unfamiliar with VHSPS, it's a wonderful website that offers affordable DVD transfers of films that were previously only available on VHS. There are quite a few movies that most don't have the opportunity to catch now that videos have become an obsolete medium. Few still have a functioning VCR in their households and sometimes finding additional copies of many of these titles is near impossible or far too expensive. The VHSPS allows film fanatics the chance to add "new" copies of long-forgotten or totally unknown flicks to their collections for pennies and nickels and the occasional dime.

And, naturally, they've jumped on the Black Friday/Cyber Monday bandwagon and are currently offering fifty-percent off all their available titles between now and December 2nd. All you have to do is enter the codeword black50 when you're checking out your order and all discs are half-off. They ran a similar promotion last holiday and I was sure to take advantage of their extreme generosity. 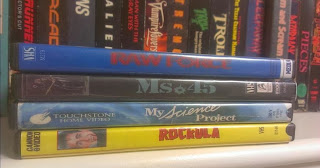 Last year's haul wasn't super-impressive. Four flicks for a measly twenty-bucks was a great deal, too good to pass up, but I didn't have any experience with the quality of their DVD transfers, so hesitated in purchasing too many. Several of my VHS copies of these pictured films are too well-worn to watch or were damaged by tape mold, so it's nice to be able to view them at my leisure without worrying about losing the VHS forever.

The quality for each was about what you'd expect and that's not at all a bad thing. The VHSPS use the best possible source materials for their copies, but there's the occasional imperfection because they're recorded from old tapes. The memories of hours spent roaming your local mom 'n pop video store will come roaring back when you do experience the rare tracking line or audio pop. Charming in how purely nostalgic they can be.

I went a little crazier with my purchases this year. Replacing some recent thrift shop finds with questionable condition with cheap DVD copies; stuff like Stay Tuned (1992) and Neon Maniacs (1986). I'm hoping to highlight a few sometime before the year is out, but today is all about some of the other titles that caught my eye when I was buying my most recent lot of discs.

So, here's several random flicks offered by The VHSPS that I'm hoping to add to my collection sometime in the near future. 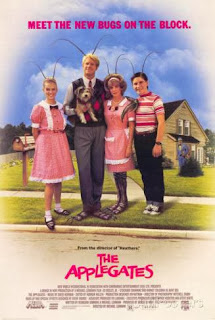 Meet The Applegates (1989) is one of those movies that I was always drawn to when I was a kid but never got around to watching. The box tucked safely away on the back wall of Video Showplace, my local haunt and the first place to employ me, with the rest of the Comedy section. I was always intrigued at the idea of giant insects posing as a stereotypical "nuclear" family with the hidden agenda of wiping out humanity. It could be because I've always been more of a fan of bizarre black comedies than your typical slapstick or satire. 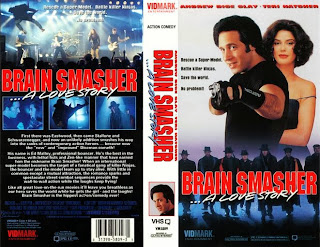 Jesus, I'd probably seen Brainsmasher... A Love Story (1993) nearly a dozen times when I was a pre-teen. It seems like HBO or TMC used to air it constantly and I'm not entirely sure why I kept coming back to watch it, but I did. We'll blame it on a huge Teri Hatcher crush inspired by her role as Lois Lane on Lois & Clark: The New Adventures of Superman. It most definitely is not because of the scene where Andrew Dice Clay leaves an imprint of his fist in some yakuza thug's face, literally smashing his brain in the process. The Keep (1983) is early Michael Mann attempting an atmospheric horror flick set during World War II and it mostly works. There's an awesome soundtrack from Tangerine Dream that is completely lacking in the current version streaming on Amazon instant video. And since it's still unavailable as a "proper" DVD or blu-ray, nabbing a copy from the VHSPS is the only way to see it as it was originally intended.

It's also further evidence that Ian McKellen can't seem to escape from appearing in movies either with or as a Nazi unless he's a fucking wizard. 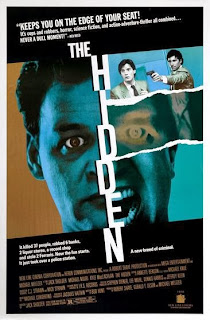 I seriously doubt anything I could say about The Hidden (1987) will do it justice. Telling you that there's an alien parasite that leaps from body to body and two cops who are trying to hunt it down is the most basic way of summing it up. It's full of speeding cars and heavy metal music and explosions and a little bit of the ultra-violence one expects from an '80s action/sci-fi hybrid. Also, boobs and Kyle MacLachlan, but not Kyle MacLachlan's boobs. 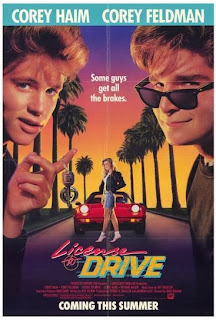 Time for a true confession of a Trash Man; I love The Two Coreys. You can blame having grown up in the '80s and early '90s and watching too much cable TV, but I adore everything from The Lost Boys (1987) to Silver Bullet (1985) to Rock 'n Roll High School Forever (1991). If either of the Coreys are there, I'm in. Combine the charisma and overwhelming rad-ness-itude of both Haim and Feldman and I'm in heaven. License to Drive (1988) does that and throws in Carol Kane and a younger Heather Graham. 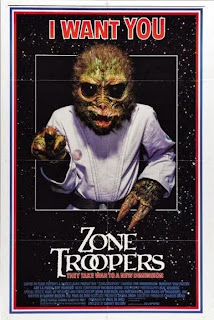 Charles Bands' Empire Pictures was responsible for dozens of "classic" genre flicks during the 1980s before turning into Full Moon Pictures and adding even more fantastic titles to their credits the following decade. Zone Troopers (1985) is one of my favorites. Another WWII-era flick, this one features a crashed alien spaceship and the American G.Is who must prevent the out-of-this-world technology from falling into the hands of the Third Reich. It's cheesy, sure, but in the best possible way. 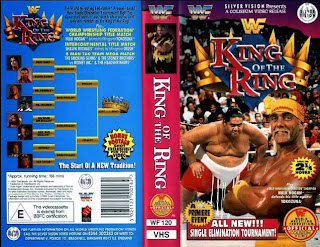 The VHSPS offers copies of several old wrestling tapes; WWF and WCW fare from before their peak runs during The Attitude Era. Most are random compilations from the early '90s, but there's the occasional pay-per-view like WWF's King of the Ring show from 1993. This was the first KotR to air on PPV and is one of the most memorable from the ten-year run. You've got Hulk Hogan prior to jumping ship to WCW defending his championship title against Yokozuna and an eight-man tag match featuring The Million Dollar Man and The Steiner Brothers.

The main attraction to the show, however, was the elimination tournament to crown the true King of the Ring. Spoilers for a two decade old show, but Bret Hart defeated Bam Bam Bigelow in the finals to win. Memorable in that it would eventually lead into a lengthy feud with Jerry "The King" Lawler, a talent perhaps best known for punching Andy Kaufman one-time and hanging out with a midget named Queasy.

Wrestling is dumb.
Posted by the Trash Man at 6:25 PM