All I wanted for my tenth birthday was some Killer Tomatoes.

Yeah, the world was a strange place in 1991. Eastman and Laird's Teenage Mutant Ninja Turtles had already taken over and toy companies were scrambling to find the next big thing. Their search for potential properties led them to some strange places; ultra-violent, R-rated films like Robocop and The Toxic Avenger both received animated series and their own toy-lines. The same went for Bucky O'Hare, a small-press comic book from the mid-'80s.

And a B-movie spoof from the late '70s managed to squeeze out three sequels, a Saturday-morning cartoon, and a short-lived line of toys from Mattel. If you don't know which flick I'm talking about, well, shame on you, because it's Attack of the Killer Tomatoes (1978).

When my tenth birthday rolled around, there was already an Attack of the Killer Tomatoes cartoon airing as part of Fox's Saturday morning line-up. Mattel had just launched an accompanying toy-line a few months later and I was absolutely obsessed with both. The only problem that existed was my mom's refusal to allow me to own any of the toys. I'm still not sure why, since she never had any problem with me collecting Teenage Mutant Ninja Turtles action figures, a line which featured characters like Pizza-Face and the Rat King.

Twenty-two years later and a dream has been achieved.

It does not make me feel like an adult. 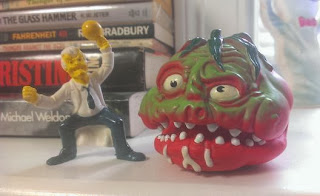 I picked up Ketchuck, the drooling monstrosity seen above, a couple weeks back on eBay. Of all the Killer Tomatoes toys, he appealed to me most because of the companion PVC piece he originally came packaged with, Dr. Putrid T. Gangreen. In both the original films and the animated series, Doctor [or Professor] Gangreen was portrayed by the legendary John Astin. As a life-long fan of The Addams Family and Night Court and Eerie, Indiana, it's way too exciting for me to finally own one of his characters in toy-form. 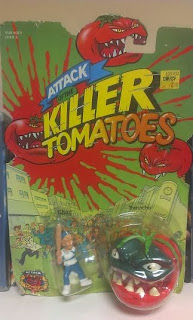 This actually arrived in the mail today, another recent eBay score, along with a second carded piece I'll get to in a moment. This particular one is Tomacho, along with young Chad Finletter, the main "hero" of the cartoon series. I had no interest in keeping either toy in the package, despite how ridiculous and fun the card-back is. You can barely make it out, but there's a clearance/mark-down price tag from the now defunct Child World/Children's Palace, which brings back far too many happy memories. 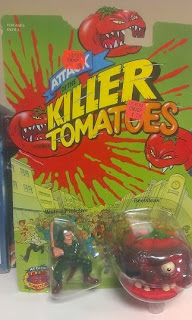 I did own one toy from the Killer Tomatoes line when I was a kid and it's the one above. Thanks to some clever subterfuge, I managed to score Beefsteak, packaged along with Uncle Wilbur [and his dumb parachute..! Tomatoes! Tomatoes!], for my birthday. One of my aunts used to work part-time at a local Caldor store and she would occasionally allow me to pop in and pick out a toy or candy bar or comic book. It was during one such visit that I convinced her that what I wanted most for my foray into the double-digit ages was a murderous, plastic fruit/vegetable. The ploy worked and I remember opening gifts at my grandparents' house the day after my birthday.

And I clearly remember the distinct look of disgust on my mom's face when I unwrapped this particular present.

Beefsteak disappeared from my collection only a short time later.

I never forgave my mom for her obvious betrayal. 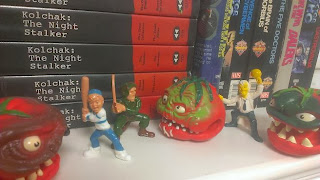