Be Kind, Please Rewind: The Day of the Doctor 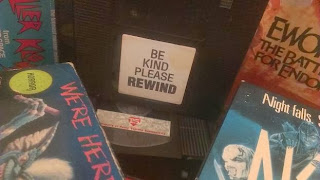 Days go by without words. They become weeks and we're forced to admit that time is not all wibbly-wobbly, that is passes all too quickly and we are never ever ever going to get it back. Best to forget regrets and apologies and get right back into the things that make us happy. That make me happy.

Today marks the 50th anniversary of the good Doctor; his very first adventure aired November 23rd, 1963 on the BBC. It's not something I would have imagined myself celebrating a few years back, since I only became infatuated with the madman and his box a little over a year ago. It started with a friend of mine mentioning that he caught a couple episodes and that maybe I would enjoy it. Maybe I would! I did have, after all, an odd history with the Doctor.

It started with a stack of novels purchased for mere pennies each at a bookstore that was going out of business near my college. A couple dozen of his adventures sitting on a shelf, looking all too tempting bunched together like that and especially for so cheap. Plus, I was familiar enough with Doctor Who thanks to occasional appearances during the "classic" Sci-Fi Channel years. Not that I ever watched the program, mind you, but through commercials and promos like this one.

So, sometime last year I introduced myself to the current incarnation of the Doctor. I watched Matt Smith's first episode, "The Eleventh Hour", and enjoyed it and continued from there. After a couple months, I'd gone back and devoured every episode and special from the 2005 relaunch and on until the current series. I adored every adventure through time and space, every encounter with the Daleks and the Weeping Angels and even the Autons. Like my love of comic books, though, it was the continuity, the history, that I loved most.

Except I didn't know much of the history, did I? The Doctor had nearly forty-years worth of traveling and saving all of reality that I'd missed completely. Eight different actors portraying "The Oncoming Storm" that I knew little to nothing about. It was something that needed to be rectified and there was no better way to catch up on the Doctor's earlier misadventures than to watch them using an outdated media.

The wheezing of the TARDIS could only sound so good when it's coming from the faint hum of magnetic tape. 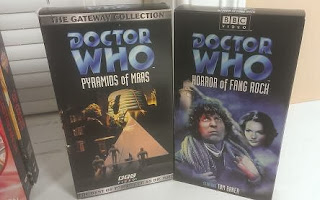 Tom Baker, who portrayed the Fourth Doctor, was the obvious place to start. With his ridiculous scarf and robotic dog, K-9, and the most beloved companion, Sarah Jane, by his side. He is arguably the most famous and recognized of all the Doctors, especially to older fans of the franchise. I picked up a copy of Pyramids of Mars from a third-party seller on Amazon, my very first Who VHS, and absolutely loved it. Even with its outdated special effects and questionable "acting", I was blown away by the idea of the Doctor battling an ancient, Egyptian space-god and his mechanical mummies. Super trippy in the best possible way. 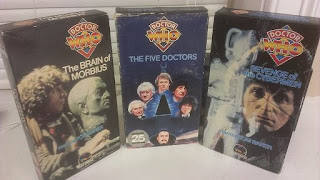 Some more Fourth Doctor, including confrontations with the infamous Cybermen and the much more obscure Sisterhood of Karn. The middle tape is The Five Doctors, a special that celebrated the program's 20th anniversary by uniting the [then] current Doctor, Peter Davison, with all four of his previous regenerations. I've yet to watch it, but it's jumped to the top of my watch-list after spending so much of the last week engrossing myself in everything Whovian. 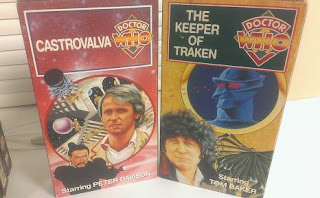 Castrovala is actually the first full serial that featured Davison as the Fifth Doctor and he's off to a bumpy start; forced to confront his ancient foe, The Master, on his premiere adventure. It's actually a sorta' sequel to The Keeper of Traken, which reintroduced The Master after a five-year absence from the Doctor's many, many lives. 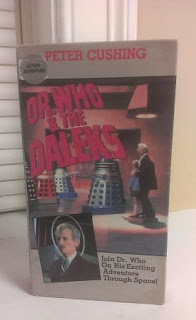 Ah, the last two in my little collection are the oddities in Whovian lore. Amicus Productions, a British film company, is well-known for the numerous horror anthologies it's produced over the years. During the mid-60s, only a few years after the Dr. Who program originally aired, they were responsible for filming and releasing two feature-length pictures in full-color. Peter Cushing, who we all remember fondly as Van Helsing and Grand Moff Tarkin, was tasked with playing the part of "Doctor Who", a human who invented a time-machine and found himself drawn into conflict with the murderous Daleks.

Dr. Who and the Daleks (1965) was followed by Daleks -- Invasion Earth: 2150 A.D (1966), and both were loosely based on earlier serials from the television program. While the Daleks remained mostly faithful to their TV counterparts, Cushing's "Doctor" was a simplified version; a mere human inventor who traveled along with his granddaughters, Susan and Barbara, to a planet ravaged by nuclear war. Not a far cry from the true Doctor, an alien Time Lord from the planet Gallifrey, but enough so that the Amicus films are largely forgotten or ignored by most Whovians. 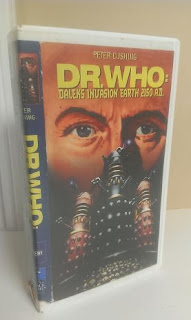