I've wasted a lot of dollars over the years. We're not talking large sums of cash spent on big purchases or anything like that. This has more to do with the singles dropped on candy and cheap back issues and the dollar menus at numerous fast-food joints. One dollar doesn't buy much; certainly not the type of stuff to write home or blog about. This Halloween season, though, it seems that good ole' Samhain worked his dark magic to bring something truly wonderful into my world.

It all started a long time ago in a galaxy far, far away... 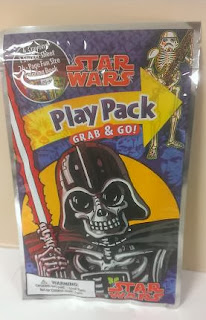 Actually, it started in the dollar bins at my local Target, but that doesn't make it any less amazing.


My days as a true-blue, "baby, I love you" fan of Star Wars are gone. That didn't stop my heart from racing at the sight of this Grab and Go! Play Pack. A joint venture between LucasArts and Dalmation Press, this children's activity kit combines the spookiest holiday around with one of the greatest sci-fi franchises of all-time. Re-imagining the Dark Lord of the Sith and his merry band of galactic stormtroopers as skeletons doesn't seem so epic, but goddamn if I don't feel like I could demolish Alderaan with the power of love I feel
for this pack containing cheap stickers and a tiny coloring book. 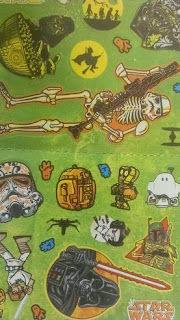 And here are those cheap stickers. Ranging from adorable to awesome, they depict stuff like Boba Fett riding a broom, C-3PO carrying a pumpkin and Dio de Los Muertos-inspired Stormtrooper helmets. All so great. I'm especially fond of Darth Vader looming ominously over a bowl of candy that looks suspiciously like half a Death Star. 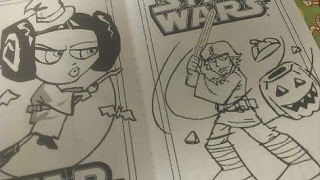 The art inside the miniature coloring book varies in quality, but I still love nearly every image that lays within. Even though Princess Leia looks like a failed attempt to cash in on the popularity of the Bratz doll-line, I still love her hovering on her witch's broom, surrounded by cute, lil' bats.

I'm less sold on Luke carving a pumpkin with his lightsaber, but he's still pretty great. 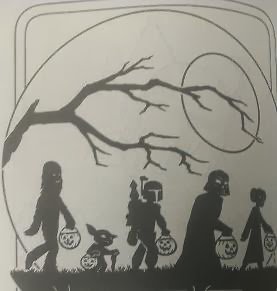 It's a simple enough image, sure, but it's also my favorite in the whole pack. The silhouettes of several iconic Star Wars characters, so easily recognizable, carrying jack o'lantern pails to collect their treats. The details aren't really there, but it appears that the "moon" behind them isn't a moon at all. How fitting.

I also enjoy the fact that it sorta' resembles the theatrical poster for Halloween 3: Season of the Witch. But maybe that's just me. 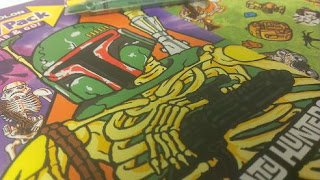 Email ThisBlogThis!Share to TwitterShare to FacebookShare to Pinterest
Labels: halloween, season of the witch, star wars