The League: ...and The Ultimate Arcade 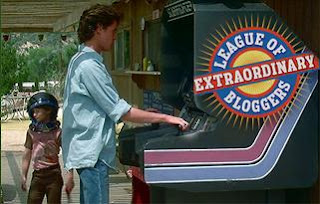 We're back with another weekly topic from The League of Extraordinary Bloggers and this one is quite the challenge. Tougher than trying to tackle a Contra run without the Konami code. Harder than a fistful of quarters. The League asks--

You’ve decided to build an addition onto your house, a rec room that will feature your very own fantasy video arcade. What games are on your shopping list?

I almost skipped this week because I figured that my own list would read like many of the other League members own. A steady mix of classics like Galaga and Ms. Pacman with some truly inspired, early '90s side-scrollers based on properties like The Simpsons and Teenage Mutant Ninja Turtles. This isn't surprising, because those games were a huge part of any kid's childhood if they happened to grow up in the '80s and '90s. I wasn't sold on the idea of spending time writing a redundant love-letter to the same games as everyone else.

And then I remembered Rampage. 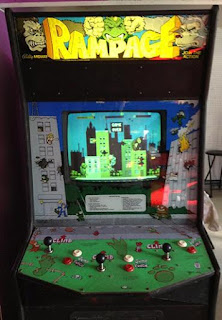 I'm sure that I'm not the only one who would include this classic title in their wishlist and that doesn't bother me one bit. Everyone should want a Rampage cabinet in their arcade. I can't imagine the things I could have bought with all the quarters that I've dumped into this machine. I probably could have retired at 18 if I'd never taken the time to familiarize myself with Lizzie, George and the totally underrated Ralph. Nevermind the time spent playing at several arcades, at home on my NES and, in later years, anywhere and everywhere with a poorly ported Gameboy Advance version of the game.

I might have ended up with more material wealth, but I would have been poorer in life without Rampage in it. 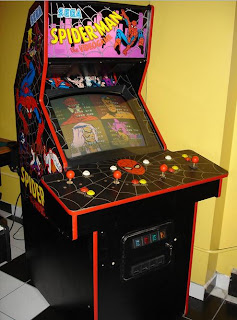 With everyone else clamoring for a six-player version of The X-Men Arcade Game [and who can blame them], this would actually be my first choice for an arcade game based on a Marvel property. I didn't discover it until the mid- to late-nineties, quite a few years after it was released by Sega in 1991. I remember stumbling upon it at a small arcade at one of my local malls, having never known that it existed. And what a goddamn oddity I discovered.

Of the four playable characters, only two seem to belong. There's ol' Web-Head himself, which makes perfect spider-sense since it's his name on the cabinet and on the screen. The inclusion of Black Cat also seems like a no-brainer considering her on-again, off-again romance with the wall-crawling superhero. Then you have Hawkeye and Namor, the Sub-Mariner, neither of whom seem at home in this game. Yes, they were occasional allies of Spidey's in the comic books, but then, so was Deathlok and Son of Satan and Red Sonja and every other character that Marvel has ever published.

Not that I'm complaining. Hawkeye is actually one of my all-time favorite characters. I'm pretty sure he's the only one that I even attempted to play as in those few instances where I tried this game out. I just love the idea of seeing him fight Hobgoblin and Venom.

I was totally indifferent to The Sub-Mariner, but you can't really fault a teenaged boy for not picking the mostly naked Atlantean with winged feet and electric eel powers. 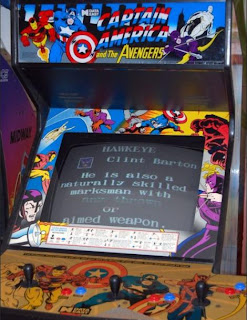 My second pick for a Marvel-based, beat-em-up, side-scroller is Captain America and the Avengers. This one has a little more nostalgia built into it than my previous pick. My 10th birthday is the only one where I managed to convince my parents to host the party at our local arcade, Great Times. This game had just been released and was our main focus for the majority of the celebration. I couldn't have cared less about my gifts and cake, especially with the chance to hang out with my best friends and take on the Red Skull and his army of costumed criminals.

I absolutely adore the cabinet art for this, particularly the selection of villains battling the titular heroes. Who doesn't love Batroc the Leaper? 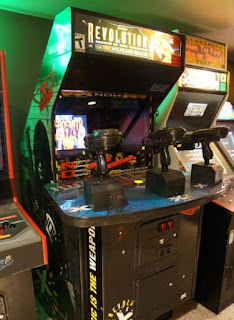 There isn't an arcade around worth its tokens that doesn't have at least one shooter-style game located inside. I could have picked something like Terminator 2 or House of the Dead II [which I played constantly at a pizzeria I frequented during college], but instead I'm picking Revolution X. I can't stand Aerosmith, an act of treason for someone who lives so close to Boston, but I love how ridiculous and so very '90s this one is. Plus, it's another in the short list of games that I played from Stage 1 to End Credits in one go. I'm not sure what possessed me to pump so many quarters into this particular title when I could have been playing Killer Instinct or Afterburner II.

Maybe I just liked the idea of using flaming, explosive CDs to blow shit up. 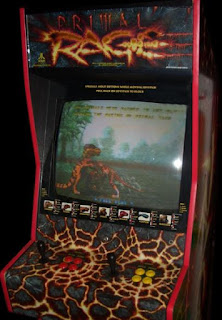 Like with Revolution X, it seems wrong to build an arcade without including a fighting game of some sort. And again, I could have gone the route of a Street Fighter II or Mortal Kombat or even one of the Tekken titles, but this is where it's really at.

Primal Rage feels like a distant cousin to Rampage and I'm totally okay with that. Instead of focusing your destructive prowess on buildings and the military, you play as dinosaurs and giant apes hellbent on destroying one another. Using abilities far beyond those of normal prehistoric beasts, you breathe fire and shoot ice beams like something out of a Godzilla flick.

Plus, you still get to devour humans to regain health, though this time around they're cavemen [and a few scantily-clad cavewomen] worshiping at your feet. Which is infinitely more satisfying than eating some poorly pixelated occupant of a high-rise you've just demolished.

The newly rechristened Nerd Nook legit took -all- my original picks and added Michael Jackson's Moonwalker like some kinda' psychic or something.

Goodwill Hunting 4 Geeks talks Atari 2600 and ogles Ms. Pacman. If it were me, I'd be concerned that her husband might pound a few power-pellets and come a-callin'.

No tokens needed over at Branded in the 80s and a nice reminder of Nintendo's PlayChoice-10, a machine very near and dear to me.
Posted by the Trash Man at 4:31 PM