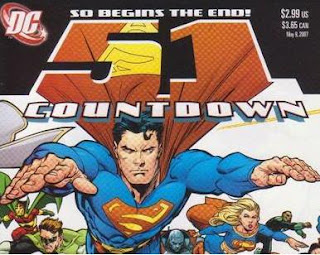 I'm having difficulty in mustering the enthusiasm for the release of Man of Steel this Friday. I don't know if it's my feelings towards the work of director Zack Snyder. I never cared much for his films, particularly Sucker Punch and Watchmen [a movie I felt cold towards, despite loving the source material]. It could be that the cinematic exploits of The Last Son of Krypton have never really appealed to me. I still have yet to see Superman Returns and the original series is something that was always in the background of my childhood, comforting in its existence, but nothing I ever gravitated towards.

It's odd, but the idea of Superman has always meant more to me than any actual story.

Likewise, I've always enjoyed the odd marketing or promotional tie-ins over his many adventures. Give me Kryptonite Doritos and Superman Crunch cereal and I'm thrilled. Combine the Man of Steel with Legos and I am beyond excited. 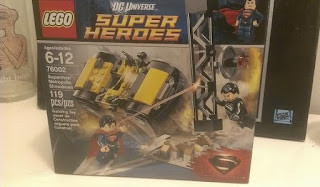 Which brings me to the Superman: Metropolis Showdown building set. 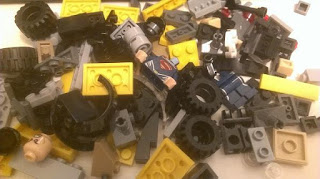 It's been years since I've purchased a Lego set. Sure, I've indulged in the blind bag mini-figures a few times in the past couple years. And yes, every Christmas I pick up a Lego Advent Calender to help get into the holiday spirit. Excluding those few exceptions, I haven't put together anything Lego in nearly a decade. So, I'm starting out small with this set. 119-pieces that would eventually become Superman, his villainous counterpart, General Zod, and the city of Metropolis; in the form of a car and a collapsible tower. 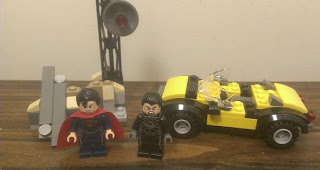 It's not very impressive, I know. There's something in its simplicity that I absolutely adore, though. Lego mini-figures are always difficult to turn away from, especially when they're meant to represent iconic characters in pop culture. Also, while I'm not sold on the re-imagined costume from Man of Steel, it sure looks good in that miniature toy form. The same goes for General Zod. His scowling Lego face is too goddamn cute. I couldn't resist. 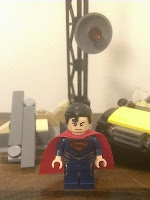 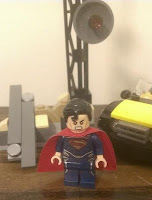 Plus, Superman's head rotates to reveal a more battle-ready face, complete with intense grimace and heat-vision eyes. The same goes for General Zod, but really, I feel like there shouldn't be a moment when he's not angry and vaporizing someone.

I can't say that the few minutes that I spent building a yellow dragster and radio tower is going to inspire me to rush out and see Man of Steel this weekend. So, tune in the rest of this week to see what other super-items I can dig out of the Trash Bin in an effort to awaken a long-lost love for all things Kal-El.