We're back with a vengeance, a triumphant return to The League of Extraordinary Bloggers, after months of radio silence. It must be a pretty interesting topic this week to pull me out of my contributing retirement, right? Well, we've been asked to tackle our Top 10... whatever we want, actually.

Normally, I'm not a fan of ranking things. Hardly a sucker for compiling Top Five Rock Albums or a grocery list of my favorite C-list celebrities. The problem is that I have a difficult time coming up with a definitive Top However Many, what with my constant shifts in mood or tastes. Something could be in my Top Three one day, and quickly be replaced by something else the next. There's just too much stuff that I enjoy to really, truly nail down a definite commitment.

So, uh, here's my Top 10 Videos That I Currently Own [in no particular order], I guess. 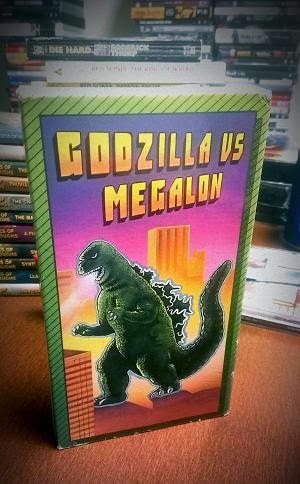 -- This is the oldest tape in my collection, the very first VHS that I could really call my own. I remember my grandmother actually giving in to my youthful pleading at a local outlet, and picking this up for me. I love the generic box-art, which perfectly embodies the cheapness of this release from Viking Entertainment, which is a company I know very little about. Apparently, aside from low-budget, bootleg monster movies, they also released a lot of Veggie Tales tapes? Eh. 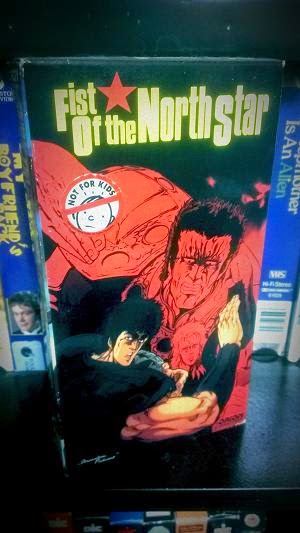 -- I went through a brief anime phase during the early '90s, back when The Sci-Fi Channel used to air "Saturday Anime", showing films like Akira (1988), Dominion Tank Police (1988) and Demon City Shinjuku (1988). All the stuff that was sure to warp my young mind. These days, well, I'm not as big a fan. Every now and then, though, I like to pay tribute to those early days of bizarre, hyper-violent animated features. This is my absolute favorite of the half-dozen titles I own, mostly because of the adorable "Not For Kids" sticker plastered on the front. 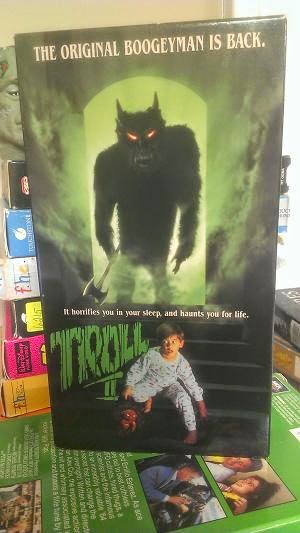 --  Is it embarrassing to admit that this film actually terrified me when I was a kid? Probably, but that's okay. It hasn't prevented me from embracing it as the true "cult-classic" that it's become over the last several years. This particular copy once belonged to my friend's aunt, who briefly owned and operated an entire store based around Norfin Troll dolls during the resurgence boom of the '90s. 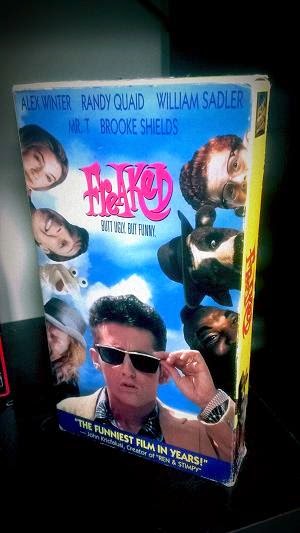 -- They really don't make films like this anymore. Actually, I'm not sure that there's ever been another film quite like Alex Winter's grotesque and absurd comedy, Freaked. An all-star cast of Z-grade celebrities, featuring the likes of Mr. T and Bobcat Goldthwait, some of most hilarious and inventive practical effects of the era, and a wonderfully dated '90s soundtrack. A staple of my early teens, and a flick I could still watch a million times over. I hadn't seen it in years before stumbling upon this copy at my local thrift shop. 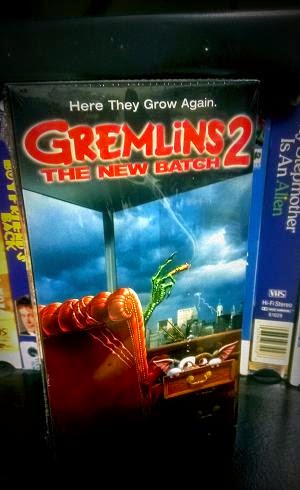 -- One of, if not, my all-time favorite movie. I had originally taped this off HBO back when it premiered, and have since purchased it on DVD and blu-ray, but I absolutely adore this VHS-copy. This was found at the same shop as Freaked, a fantastic find, and I was doubly excited to discover that this was still sealed. I have no intention of ever opening it. 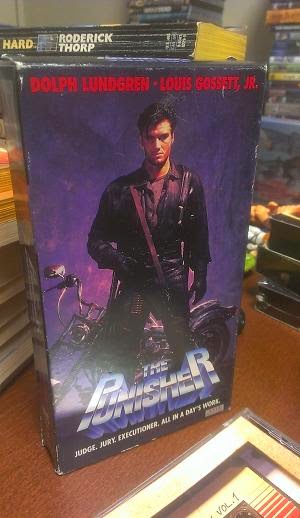 -- I've only ever seen bits and pieces of this early comic-adaptation featuring Dolph Lundgren. Something I have regretted for years, hoping to finally settle in and watch it in full. It only seems appropriate to view the film as God intended; on glorious, low-fi magnetic tape. It's been sitting in my "to-watch" pile for way too long now. Maybe it'd be best if I stopped with this stupid list and watched the original cinematic Frank Castle kick some ass instead. 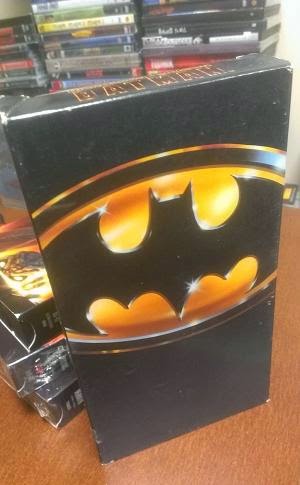 --  I feel like I've written about the Bat-mania of '89 and beyond far too often. This movie was everything to me for those couple years, an obsession that's rarely been matched in the two-decades plus since. And because of my nostalgic love for Burton's classic tale of clown and bat at odds, well, I've probably owned nearly a half dozen copies of this on VHS. I went through a bad period of picking up every single one I came across, which was both costly and space-consuming. This guy here is the Highlander of my collection; there could be only one. Or something. 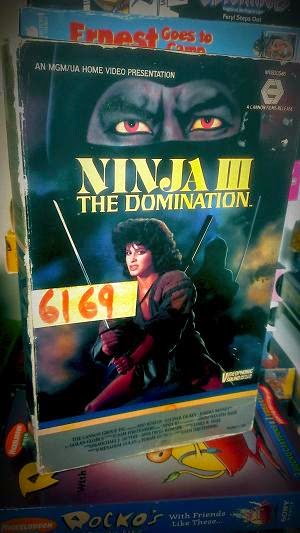 -- An aerobics instructor possessed by the vengeful spirit of a ninja-master. V8 seduction scenes. Haunted arcade games. Golf course massacres. This ridiculous film has all that and so much more. Sure, I already owned Shout Factory's blu-ray release when the opportunity to pick up this "big-box" VHS came along. But I was lucky enough to grab this from Dan Kinem of VHShitfest, one of the brilliant minds behind the VHS-documentary, Adjust Your Tracking. There was no way that I could resist. 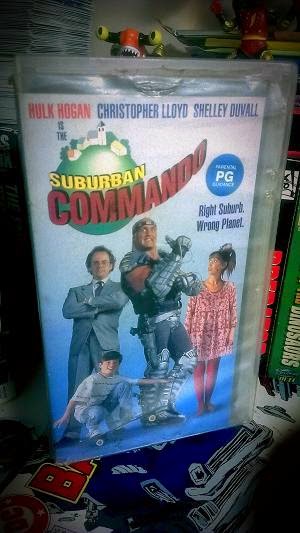 --  Goddamn, I used to rent this one all the time as a pre-teen. Combining my love for professional wrestling with an adoration for everything Christopher Lloyd, there was nothing better at the time. Again, embarrassing confession time, but this has been a tape that I've been dying to get my hands on for quite some time now. I found it buried in a bin full of loose and dirty Hasbro WWF action figures this past weekend. The seller was more than happy to give it to me for free with my large purchase of wrestling toys [which you might see a glimpse of sometime in the future]. 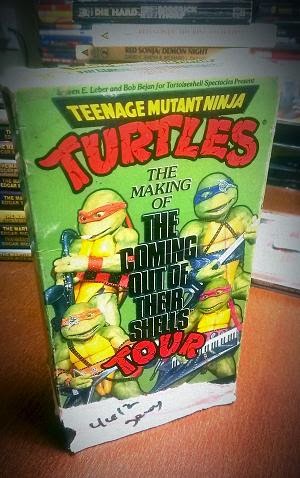 -- Remember when the Ninja Turtles started their own KISS-esque, arena-rock band? If you're like me, you probably wish you didn't. This beat-up and unloved tape found its way into my grubby paws earlier today, thanks to an extremely generous, and totally VHS-filled, package from Brian of Awake Oh Sleeper. Of the several tapes he's sent me, this is the one that I adore most. My own childhood copy is long-gone, so I'm ecstatic to add a "new" one to my collection. I'm not sure I'll attempt a re-watch anytime soon, but it warms my heart to know that if the urge ever strikes me to, I can.

Meanwhile, you can check out the rest of The League's Top Tens...

Speaking of Brian and Awake Oh Sleeper, you can check out his own list of cinematic creatures, ghouls and ghosts here.

Over at Goodwill Hunting 4 Geeks, Derek shares his own Top Ten, featuring an absolutely adorable version of Kang the Conqueror and a space-faring cat.

Mason, from D.I Treasures, tells us all about his favorite cereals to munch on while watching reruns of ReBoot and the Wild West C.O.W-Boys of Moo Mesa.

And for all the rest, be sure to check out Cool & Collected.