Misleading title might be a tad misleading. You see, I never go out. Rarely go out. Adventures are something for bolder individuals to undertake while I'm sitting at home watching Seinfeld reruns. Most of my journeys center around trips to shops, thrift or otherwise, and the occasional visit to a friend's home. Even during this most exciting of seasons, I don't deviate from my self-imposed hermit lifestyle.

When I use the word "destinations", well, clearly I'm referring to websites I visit.

I've done a mediocre job celebrating my favorite time of year despite all the thrilling goings-on. I take solace knowing that there are those out there wearing their pumpkins on their sleeves and documenting it for all to see. I wanna thank each and nearly every one of them for offering me a chance to live vicariously through all their spooky discoveries and recounted tales of Halloweens past.

My sincere thanks look suspiciously like images stolen from their sites and a few kind and poorly written words.

It only makes sense to start with the grand-daddy of sites obsessed with everything "retro" and nerdy-- Dinosaur Dracula. The man most responsible for sorta' inspiring me to take to the internet and share my love for pop culture, Matt, actually started out celebrating the holiday on his original site, X-Entertainment. His infectious enthusiasm for horror flicks, seasonal candy and jack o'lanterns thankfully carried over to DinoDrac and shows no signs of ever letting up. Which is good, because visiting his site and absorbing every post has become as much a yearly tradition for me as eating too many bowls of Count Chocula and watching Army of Darkness on VHS.

While some people only share their love for all things horrific and bizarre during the Halloween season, well, there are those who can't help but gush all year round. Such is the case over at Freddy in Space. It makes perfect sense to indulge in horror-centric sites when the leaves are changing colors and you can find candy corn on all store shelves. You really should be hanging with Johnny and celebrating "slashers" during those other times of year, too, though. If you're not already, you need to get on that, kids. 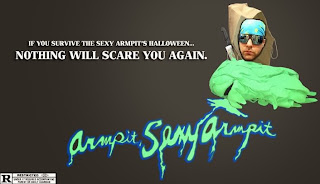 Totally completing this Trilogy of Terror from New Jersey is The Sexy Armpit. I've been loving Jay's look at all the macabre happenings in the Garden State; everything from visiting costume shops and glow-in-the-dark miniature golf, to recapping episodes of Ah! The Real Ghostbusters. He's also running the coolest Halloween-themed giveaway this side of the Trash Pile. He's not only doing things right when it comes to celebrating the holiday, but he's also super-generous and twice as sexy. 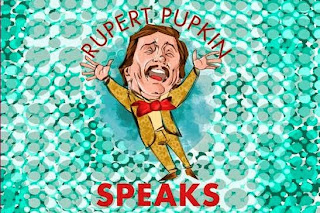 Rupert Pupkin Speaks is a little less concerned with candy and old, animated Halloween specials than most other sites I've picked to highlight, but it has something else that makes it a fantastic destination for me-- the Favorite Underrated Horror series. A number of film historians, critics and archivists each get to share their personal lists of what they believe are the best of the best "forgotten" horror flicks. It's an absolute treasure-trove of cinematic gems certain to make this Halloween season the scariest one yet. 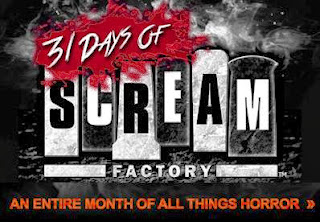 Of course, if you're looking for something to watch this October, you can always take a peek over at the official Scream Factory site. A great, lil' off-shoot of Shout Factory!, they offer dozens of terrific titles to thrill even the most jaded of horror enthusiasts. It doesn't hurt that they're offering killer deals and one of the best contests I've ever seen; a chance to win every single title they plan to release in 2014. And if the movies they've already announced or teased are any indication, it'll be well worth an entry. 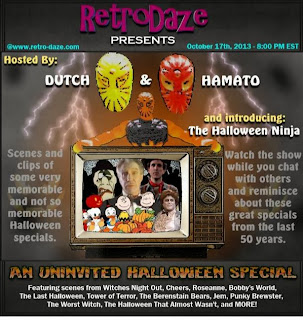 If you're like me and you don't want to leave the comfort of your basement dwellings but still want to make the most of the holiday, you need to check out Retro-Daze. They're looking to share fond memories of Halloweens long ago and are all dolled up for the occasion. If you're free tomorrow night [Thursday the 17th], you should check out the Retro-Daze Public Domain Theater, where they'll be airing their first Halloween Special. It looks to be filled with all sorts of vintage spooky treats and you don't even need to don a costume and knock on any doors to receive 'em.

Hell, you don't even have to wear any pants.

Email ThisBlogThis!Share to TwitterShare to FacebookShare to Pinterest
Labels: halloween