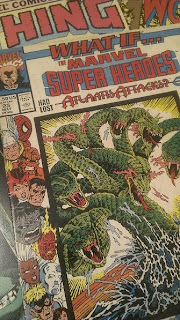 I've owned this comic longer than most others in my collection and I honestly can't recall how it came into my possession. It's not one that I picked up off the rack, so I can only assume that it was acquired through a trade with one of my childhood friends. And unlike a majority of my comic collection, this particular issue has seen a lot of wear and tear. The spine is noticeably cracked. The pages yellowed and torn from being handled over and over again. I must have read and reread this single issue dozens of times and despite having not looked at it in years, I remember so many moments from it vividly.

Of course, it was probably all the carnage and death and destruction that traumatized me as a kid.

Those unfamiliar with Marvel's What If... series can probably grasp the core concept just by looking at the covers. Each issue took a key moment in the history of the Marvel Universe and re-imagined it occurring with different results. What if the Uncle Ben hadn't been murdered? What if Captain America had never joined the Avengers? These alternate tales featured major characters changed in some way, sometimes drastically and sometimes not, and almost always ended badly. Issue number 25, which rewrites the crossover event, Atlantis Attacks, ends very badly for the entire cast of Marvel characters.

Let's take a look at some of the more gruesome and dramatic demises and please remember that I first read this when I was nine-years old. 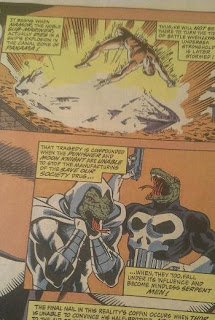 The issue opens with Namor, the Sub-Mariner, dying in a single panel explosion. His death here is the first major departure from the original crossover, which took place throughout several Marvel annuals in the summer of 1989. The second event that differs from its "616" counterpart is the transformation of dozens of heroes, super- and otherwise, into mindless servants of the serpent-god, Set. Pictured here are Moon Knight and the Punisher, but as readers would discover in a few short pages, these two were not alone. Also affected by the tainted drug and likewise transformed are Spider-Man, Daredevil, most of the X-Men and the New Mutants. 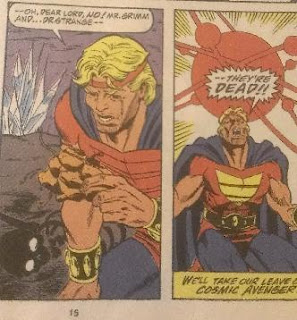 Despite being trapped in another dimension and severely weakened, Set himself quickly dispatches heavy-hitters like Dr. Strange and the Thing. It doesn't bode well for the Earth-based heroes if the serpent-god's worshipers manage to free him from his prison.

Thankfully, the full-force of the Avengers and the surviving members of the Fantastic Four are ready and waiting to prevent such a catastrophic event from happening. 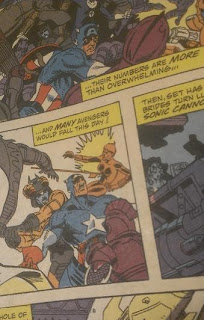 And, of course, they fail miserably. 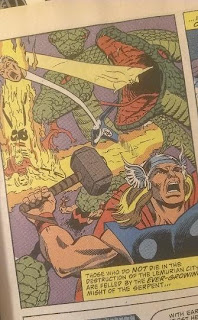 It was especially jarring as a young kid to see this many big-name heroes killed so easily by Set. One panel alone sees Iron Man and Mr. Fantastic both burned alive and the iconic [and ionic] West Coast Avenger, Wonder Man, ripped in half by two of the serpent's seven heads. You can barely see the Vision being devoured in the background by a third and Captain Marvel/Photon flying into the gaping maw of a fourth. Thor is the only hero to survive this particular battle, but he'll later meet his demise alongside an odd gathering of heroes and villains alike. 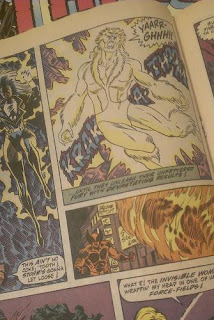 It wasn't just the serpent and his followers that the Marvel heroes had to defeat. There was also Set's seven "brides", all fellow heroines who had been kidnapped and brainwashed to turn against their friends and allies. Former enemies, Wolverine and Sabretooth were forced to team-up, along with Thor and several others to save what remained of the world. Logan attempts to warn his old arch-enemy, but fails to save him from the elemental might of former teammate, Storm. 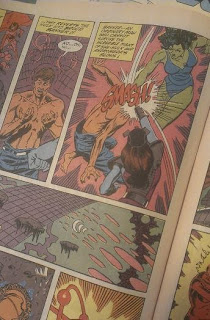 The then-grey but still incredible Hulk manages to hold his own against the combined strength of the Atlantean warrior, Andromeda, and his own cousin, She-Hulk. He can't, however, predict that a hex spell cast by the Scarlett Witch would transform him back into mild-mannered Bruce Banner. It also happens to result in one of the more cruel and brutal kills in the issue. 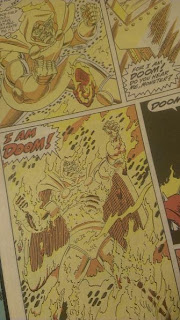 My personal favorite moment features the always opportunistic Dr. Doom. Facing the creature head-on while the brides are distracted by the others, Doom [along with Thor and Rachel Grey, Phoenix] plays the role of a hero for once. Normally, he would have made some bid to steal the power of Set for himself or something equally as devious, but here he is presented as wanting nothing more than to survive the monster's rampage along with his allies.

Even with all seven of Set's heads turned on him, dousing him in their mystical flames, the monarch of Latveria simply cannot fathom defeat. In his final moments, his suit of armor melting around him, Doom screams in defiance. It's a bold, almost noble, moment for a rather dubious character, and I still absolutely love it.

Yeah, Captain America might have only had a single panel where he's stabbed in the back by a nameless Lemurian warrior, but Dr. Doom got the most dramatic death in the entire issue. It only seems fitting for a man of his stature.

Email ThisBlogThis!Share to TwitterShare to FacebookShare to Pinterest
Labels: comics, death, doom, marvel, what if