Deathlok Wants to Live at Your House

I buy a lot of comic books.

Sometimes this means that I end up with duplicates; issues I had forgotten I'd read before purchased for a second [or even third!] time. Part of my attempt to avoid becoming a comic-related hoarder has been stuffing random floppies into the free giveaways and consolation prizes from previous contests.

Yeah, you might have noticed that there haven't been a whole lot of giveaways/contests lately. I mean, really, there hasn't been a whole lot of content here on the blog these last couple months, so it only makes sense that the freebies would have fallen by the wayside, too. Next month marks the one-year anniversary of my first "One Man's Trash..." Free Giveaway, though, so I'm gearing up for a Godzilla-sized contest to commemorate and celebrate the occasion.

For now, I've decided to run a little comic-related giveaway to hold you all over until then. 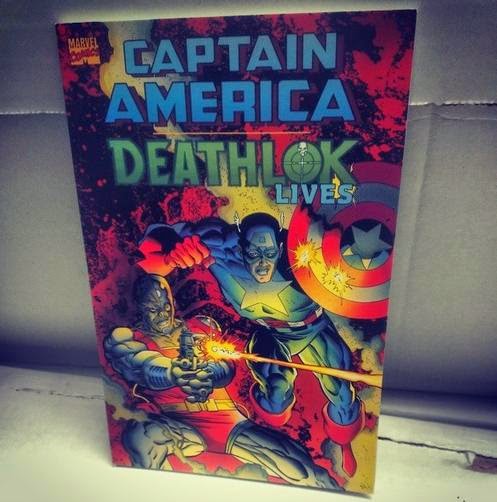 If you follow me over on Twitter [@itstrashculture] or Instagram [also, @itstrashculture], you've probably noticed that I've been splurging quite a bit on books from my local comic shop's dollar-bins. I've found tons of ridiculously great issues to add to my collection; the type of stuff that I plan to hold onto forever and ever.

But there's the occasional books that I have no real use for that prove to be too good a deal to pass on.

Like the Captain America: Deathlok Lives trade paperback that you see above.

Published by Marvel in 1993, it collects issues #286, 287 and 288 from the original Captain America series. The three-part story arc finds The Star-Spangled Avenger flung into the far-future and teaming-up with the first incarnation of Deathlok, Luther Manning. It's an awesome little tale that I'd recommend to any fans of Cap [or Deathlok!], and I'm giving someone a chance to win this very copy.

Oh, and I'll definitely be throwing a few more random floppies in the "prize-pack", as if you needed any more incentive to take part in the giveaway.

All you have to do is leave a comment below, or shoot an email to itstrashculture[at]gmail.com. Feel free to talk anything comic-related, whether it's a favorite time-travel story or the first Captain America issue you ever read or whatever.

I'll be announcing the contest's winner next Saturday, June 14th, so you can enter any time between now and next Saturday morning. Keep your eyes peeled here for that announcement, and hopefully some fresh content will make an appearance in the meantime!