Playing With Pizza, Fighting With Food


If we're breaking radio silence after three-plus weeks, you gotta imagine it's for the most important of reasons. An explanation of where I've been hiding away all this time! The reasons why there hasn't been any of the weekly Bogdanovich Challenge updates in over a month! Something! Anything worth the time it took to finish this paragraph!

I'm here to talk toys. The trashiest toys from my youth. The totally bizarre, bottom-of-the-barrel junk that could only appeal to the weirdest kids on the block. In a decade filled with plastic army ants, half-naked barbarian princes and transforming boom-boxes, these were the absolute strangest action figures you'd find hanging on the pegs. Or cluttering up the bargain bins. 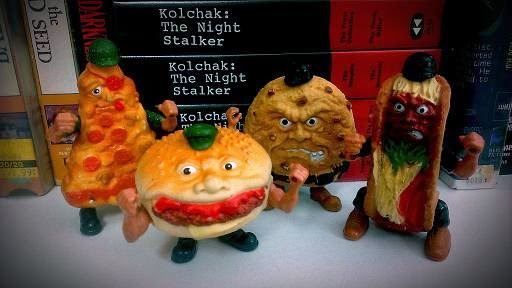 That's right, guys and dolls, it's the Food Fighters.

Released by Mattel, this toy-line featured several anthropomorphic food-items with military skills that would send John Rambo running for the hamburger hills. The two warring factions, the heroic Kitchen Commandos and their villainous rivals, The Refrigerator Rejects, battled for dominance in kitchens across the globe during the late '80s. However, without the benefit of an accompanying cartoon or comic book, the line was shelved after only a single wave of figures [and a couple vehicles] were produced.

This is another fine example of brilliantly bizarre toys that I never owned, but so desperately longed for, as a kid. Instead, I was reduced to drooling, green-with-envy, over the handful of Food Fighters that the brothers across the street from me owned. It's a recurring thing from my youth; envious of the silly, stupid stuff that other kids in the neighborhood had.

So, when I noticed that Nerd Rage Toys had listed quite a few of these deadly and delicious soldiers-of-misfortune on the cheap, well, I couldn't resist pulling the trigger. 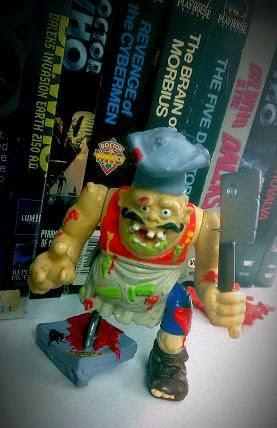 They weren't alone, however. I also managed to score a nearly-complete Pizza Face from the original Teenage Mutant Ninja Turtles series. He's one of the few villains that I never originally owned, so I'm pretty psyched to add him to my budding TMNT-collection.

And, bonus points, he actually fits in quite nicely with the Food Fighters, too. 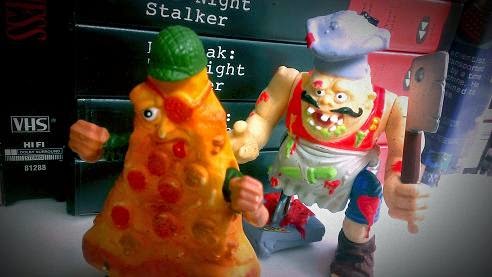