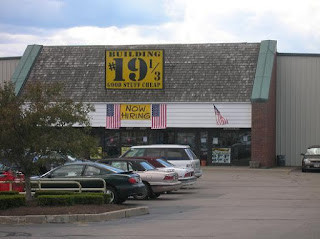 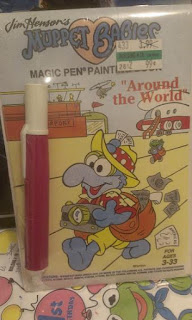 This was the last item I picked up [but the first I'll take a look at], because it was sitting in the bins next to the registers. Someone within the company decided that Magic Pen Painting Books from 1990 would make good impulse buy items and they were absolutely right. There were actually three different books to choose from and I went with my favorite, "Around the World", because Gonzo.

I don't recall ever using any Magic Pen kits as a child and I doubt that this particular one will entice me to try it out and pop that cherry. Still, I was way too excited to find this before checking out and leaving the store. 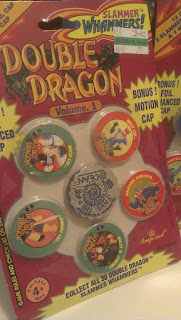 
I'm not sure there's anything that screams early '90s as loudly as these Double Dragon Pogs. Released by the Imperial Toy Corporation in 1994, the characters depicted here were from the short-lived Double Dragon animated series. Loosely based on the original arcade game of the same name, it featured brothers Billy and Jimmy Lee using mystical swords and dragon-inspired abilities to battle the evil of Shadow Master and his criminal empire. 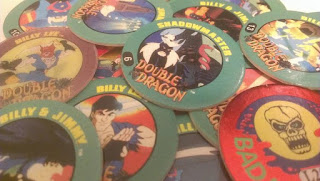 If you're anything like me, you were probably hoping these Pogs were based on the live-action film instead. Animated Shadow Master loses points for not being portrayed by Robert Patrick. 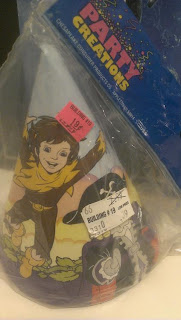 I have purchased my share of very old party supplies from this same Building 19, especially party hats, over the years. Teenage Mutant Ninja Turtles and Voltron and Biker Mice From Mars, but I think these may go down as the oddest find. I had forgotten that Fox's Peter Pan and the Pirates even existed until I stumbled upon this one, lonely bag of hats. It brought back awful memories of playing the NES game based on the cartoon and so I had to have them. Also, look at all those markdowns; how could I resist? 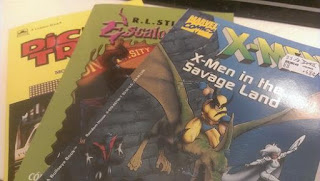 This particular Building 19 location always has an overwhelming number of childrens' books to rifle through and I never leave disappointed. Above are three of my favorite finds.

The first is X-Men in the Savage Land, which was released in 1994 by Random House to coincide with the hit Fox animated series.  Oddly enough, it's actually based on the first story-arc in Marvel Fanfare issues 1 through 4, written by Chris Claremont and published in 1982. Wolverine and Storm are both present, but the rest of the team within barely resembles the one from the cartoon.

Actually, I'm not entirely sure why I picked up the Spanish-language Goosebumps.

New copies sell on Amazon for 51 cents, so I overpaid by a little more than a quarter. That scares me more than anything R.L Stine has ever put on a printed page.


Oh, and then there's the Dick Tracy Movie Novelization. I already owned a copy, which I picked up at this same location a couple years back. I simply adore the fact that multiple copies of a lackluster novelization for a film I loved as a kid still sit on a shelf where anyone can buy them. I have committed myself to visiting and purchasing one every year until they're gone. I'll be 64 years old and just as excited as I was at 31. 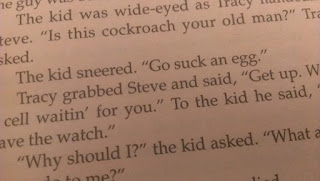 Which is way more excited than anyone ever should be. 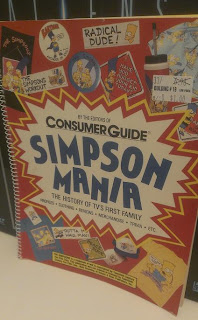 This was my absolute favorite find.

It's the Simpson Mania book, a fairly in-depth look at one of the most popular television families of all-time. The show had only been airing for a year or so when this was released in 1990, but already the Simpson clan had established themselves as the Next Big Thing on the small screen. There are chapters dedicated to the voice-talents and Matt Groening's inspirations and character bios for the entire family, but the one that appeals to me most is the one that focuses on memorabilia. 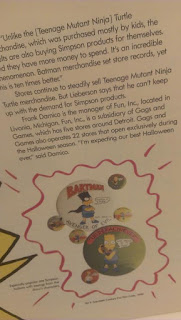 I love the comparisons to Batman and Teenage Mutant Ninja Turtles, both of which were pop culture juggernauts at the time and two of my earliest obsessions. I love the Bartman pin, which I never owned myself, but several of my childhood friends did. I even love the tacky squiggle design that surrounds the various other pins featured because it reminds me of Clarissa Explains It All.

My own personal nostalgia summed up on a single page. 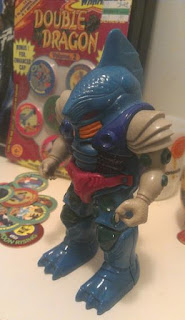 This one is a cheat, found at a local thrift shop and not Building 19, but I did find it on the same day, so I'm including it here. It's Submarauder, one of the Transformers Pretenders that was released in 1988, a couple years prior to the end of the original G1 toy line. While the included robot-modes [which mine was lacking] were usually pretty generic, the Pretender shells that contained them were anything but.

Submarauder is the first Decepticon Pretender I've owned, but based on how much I love this guy, I may be tempted to seek out more.
Posted by the Trash Man at 3:26 PM