It might have been mentioned before that one of my collecting goals lately has been rebuilding my long-lost Teenage Mutant Ninja Turtles collection. The one I sold a few years back for mere pennies and nickels and a whole lot of heartbreak. Of course, I've been taking it easy; mostly scoring big at the thrift shop with grab-bags and occasionally purchasing some deals from sites like Nerd Rage Toys. Oh, and eBay.

Unfortunately, eBay isn't quite the place it used to be. Years back, when I was originally trying to live nostalgically by buying back my childhood, I'd find larger lots of loose figures for reasonable prices. These days, well, not so much. That doesn't stop me from wasting hours on scouring the site, though, in a mad, desperate search for the best possible purchases.

And, every now and then, I stumble across an oddity that I have to have. That I can't possibly pass on. 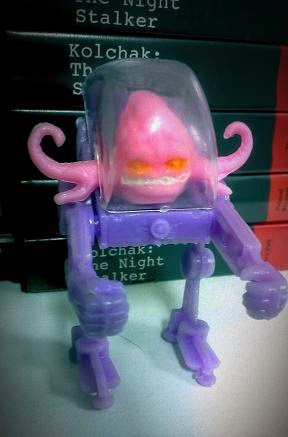 Yeah, he may sorta' resemble the vile Warlord from Dimension X that you remember from your youth, but this isn't the Krang that you and I grew up with. This predominantly purple-and-pink piece of plastic is the best kind of bootleg. Supposedly, according to the seller who listed it, this lovely knock-off was originally produced in Mexico. Wherever this brainy beauty hails from, it was clearly a labor of love and not just an attempt to make a quick buck by copying a "classic" TMNT action-figure. Or, actually, that may be exactly what it was. A poorly-made cash grab.

Well, I still love him. 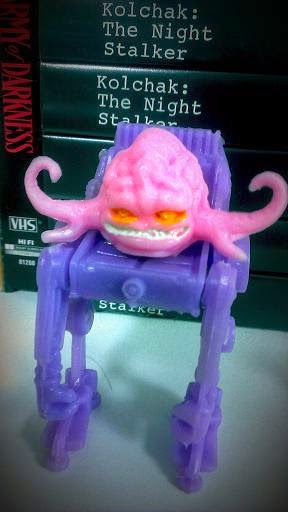 Similar to the original Playmates' toy, this version features a fully-articulated robotic "walker" body. Both the arms and legs can move, although they are limited in range. And the protective, plastic bubble can be removed in order to unleash Krang on his unsuspecting foes, be they turtle or otherwise. 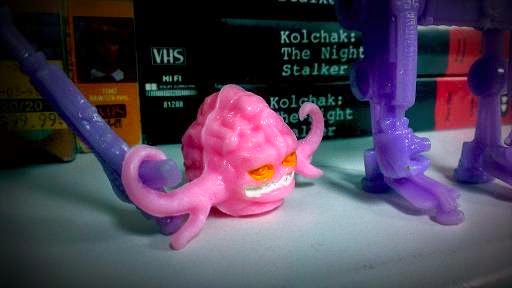 Unlike the real-deal, however, Krang himself doesn't feature any articulation. The toy from '89 featured the ability to rotate his tentacle "arms", which this one does not, though he is still able to wield his Brain-Drain Gun.

Overall, he's not a bad little addition to my burgeoning TMNT collection, but I still need to add an actual, Playmates-produced version of my favorite bad-brain. Someday, I suppose.

It's good to dream big.


You didn't have to grow up a devout follower of the WWF or professional wrestling in general to have heard about The Ultimate Warrior. One of the top talents in the industry during those peak years of the late '80s and early '90s, the man formerly known as James Hellwig was known more for his intense and bizarre behavior than any in-ring abilities. He was a larger-than-life personality that captivated fans, and nearly dwarfed the superstar status of his legendary peer, Hulk Hogan.

He died yesterday at the age of 54.

Despite some severely controversial [and quite possibly deranged] statements in the years following his retirement from the ring, I've chosen to celebrate the life and the career of one of my childhood heroes. From a time when I only knew him as the single most electric and ferocious wrestler of all-time. Whether it was watching him feud with the likes of "Ravishing" Rick Rude and Andre the Giant. Going over to my aunt and uncle's house to watch WrestleMania VI, where he would defeat Hogan for the WWF World Heavyweight Championship. Or the one time I was able to see him in person, a show at the Boston Garden circa '91, where he battled against a then-heel Sgt. Slaughter in a steel-cage match.

I owned the "classic" Hasbro action figure of Warrior, along with trading cards and WWF magazines that featured him, and a t-shirt that I wore to the point of disintegration. I can't claim that I ever painted my face in his likeness, but I certainly tried to live those pre-teen years with the same wild energy that he displayed week after week on my television screen.

It was announced a short while ago that Warrior, no longer legally known as anything but, had made amends with Vince McMahon and others within the WWF/WWE. He appeared in a commercial for their latest video game, and he was the first announced for the WWE Hall of Fame's "Class of 2014". 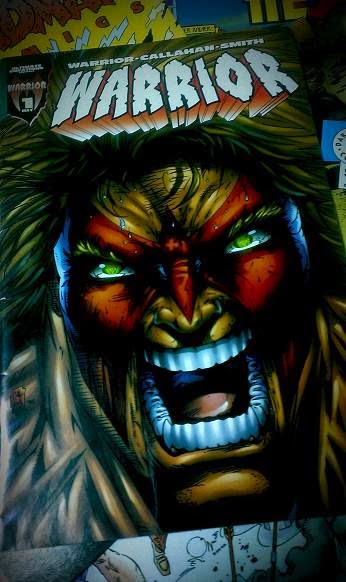 Knowing that The Ultimate Warrior was coming back, it seemed like the perfect time for me to go digging through the quarter-bins at my local comic shop in search of the short-lived, self-published comic book that Warrior wrote back in the mid-'90s. I remember a friend buying a copy off the racks when it was first released, which I casually flipped through at the time, but nothing about it really stayed fresh in my mind. Thankfully, I guess, I was able to locate a copy of issue number one in those neglected long-boxes at the back of my shop. The idea was to include it in a new feature I was looking to cook up for the blog, but hadn't yet gotten around to. So, I filed it away with a few dozen other books for a later date.

Sadly, it would also be his last appearance on Raw. 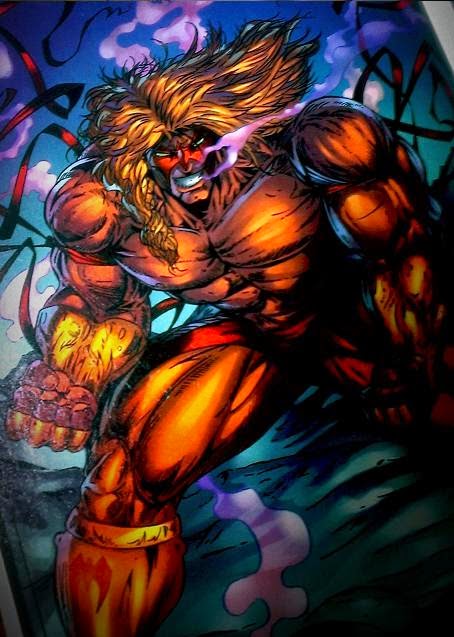 I had originally intended to poke fun at the Warrior comic, due to the tragically-dated, super-exaggerated '90s art. Its confusing and strange philosophies concerning destrucity and the "Terrain of Testament" that Warrior includes in the introduction and the narrative of the story. How it's difficult to follow, all this muddled and vague nonsense about BELIEFS and the "Spirit of the Warrior", and I realize now that Warrior or James Hellwig or however he chose to identify himself through the years, that he believed in something. That he believed in himself and in those around him, and that he built a family and worked these last few years to make amends with those he felt he had wronged. Despite what seemed like decades of inane and weird ramblings, strong and polarizing opinions, he was a man who lived his life with a raw and ferocious tenacity that I find myself envying.

He spoke often of immortality, up to and including his appearance on the latest episode of Monday Night Raw. I wanna include a little excerpt from that last promo he gave, because it really and truly feels like he knew that it was his final time in the spotlight.

Every man's heart one day beats its final beat. His lungs breathe a final breath. And if what that man did in his life makes the blood pulse through the body of others, and makes them bleed deeper, and something larger than life, then his essence, his spirit, will be immortalized. By the storytellers, by the loyalty, by the memory of those who honor him and make the running the man did live forever.


Here's to you, Warrior.

Thank you so very much for being such a huge part of my childhood. 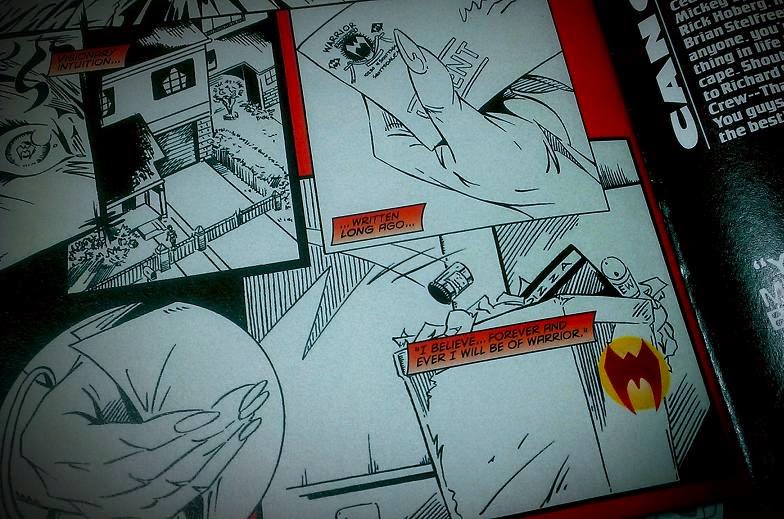